Hi friends! I am still stitching away at Snow Garden. I had wanted to have this finished by the end of January. That was not possible since I changed my mind on my linen choice.Then the order did not even ship out for one week, so I cancelled, and replaced the order from a new source. I finally received the linen and away I went stitching!!
I made a floss color change with the side of the house. I used DMC 3023. 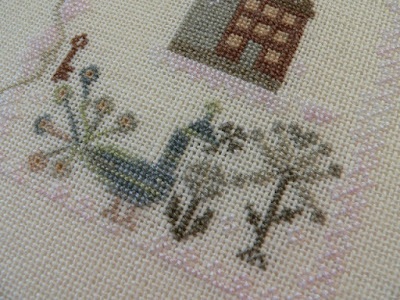 I also did my own thing with the peacock. I used DMC 4065 , one of the variegated flosses. I like these colors better personally. 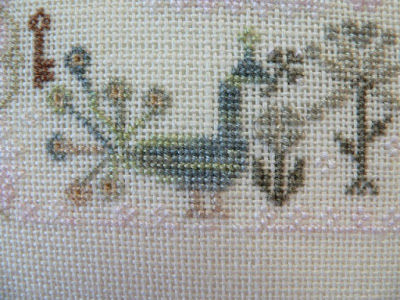 Guess what?! Another Maisie Dobbs book! Shocking, I know! ;) And..... yes, I really enjoyed The Mapping of Love and Death. Hmmm, let's see. I don't want to give anything away. I don't even know if one person is reading these books! Well, anyhow, I liked this  book a lot because it has love in it. Yep. I have been waiting for a bit of love. That's me! ;) I love these mysteries, but I love Maisie and I want love for her. And there is a baby coming. No, not Maisie's.

August 1914. As Michael Clifton is mapping land he has just purchased in California's beautiful Santa Ynez Valley, war is declared in Europe—and duty-bound to his father's native country, the young cartographer soon sets sail for England to serve in the British army. Three years later, he is listed as missing in action.
April 1932. After Michael's remains are unearthed in France, his parents retain London psychologist and investigator Maisie Dobbs, hoping she can find the unnamed nurse whose love letters were among their late son's belongings. It is a quest that leads Maisie back to her own bittersweet wartime love—and to the stunning discovery that Michael Clifton was murdered in his dugout. Suddenly an exposed web of intrigue and violence threatens to ensnare the dead soldier's family and even Maisie herself as she attempts to cope with the impending loss of her mentor and the unsettling awareness that she is once again falling in love.

Good news! The Botox injections are helping already. I was told they may not with the first round of injections, but I am feeling it. My headaches have been reduced to a 2 or 3 every day now. That is very good for me. Also when I use the oven or stove top and the heat makes my headache go up to a 7 or more, my headache goes back down to maybe a 3 1/2 within 2 hours!! That never, ever happened before. It took medication to make me better. And usually a day or more! This is so very, very promising. I am soooooo ready to be rid of daily headaches. It has been 11 months now.

I hope to be back next time with a finish of Snow Garden. :) Have a super, stitchtastic weekend everyone! 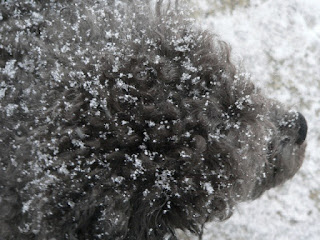 This is going to be so pretty.
Marilyn

Have a nice day
Anja

This is a wonderful chart, and you have made good progress.

Snow Garden is looking fabulous, Vickie. I like your changes. Have a peaceful and relaxing weekend!

Excellent restart and I'm so glad you've had some headache relief already!

Oh Vickie I am happy dancing all over the house! Relief at last! This news is so very encouraging! I will just keep on praying that the relief just keeps getting better!!! What a wonderful way to start a weekend!

Snow Garden is looking just lovely! The color changes you made are perfect and I love your peacock! I am so enjoying your progress!

Have a good weekend my friend! Sending lots of hugs and love!

Still loving the Snow Garden, your colour choices are great.
I'm so glad you've been feeling better, 11 months is way too long.
I just downloaded the book, thanks for the suggestion!

What wonderful news! Who could have ever imagined that Botox could be such a blessing. Praying the improvements increase. Beautiful stitching, too.

Your snowgarden looks great. I like your colour change.
Happy Weekend.

Gorgeous stitching.Hope you have a good weekend.

So happy to hear about the pain reduction! Am always amazed at your over one. This book sounds like something Carole and I would like so thank you.

Beautiful stitching. It's such a lovely piece, I enjoy seeing your progress.

Praise God that the shots worked and your headaches are going down. That is so totally awesome. The power of prayer is beyond anything that can be explained to those who do not believe. I am super excited that the shots are working. This is indeed an answer to prayers.

Wishing you a most blessed day sweet friend. :)

Such a lovely design - so delicate looking.

Hooray for the decrease in number of headaches! And for not having to take meds for the heat ones! I'm so happy for you.

I do like the color choices you made with the Snow Garden. The peacock looks wonderful. So glad to hear you are doing better!!!

How do you like stitching one over one on 25 count? I recently ordered some of it with "easy grid" on it for a HAED that I want to start. I usually use 28 count for over one but I think it will be just enough bigger with three threads less per inch that it will be easier to stitch on a solid coverage piece. Here's hoping. I am thrilled that you feel like the shots are helping. God truly does answer prayers. Happy stitching..............

Oh, Vickie, your sampler is going to be so beautiful! I have a few of these patterns, and they're very pretty, but you're version is amazing! Have a wonderful weekend...

There you go, you have your answer, no more cooking for you!! I hope things continue to get better.

A very pretty design - it will look amazing over one. Glad you're getting some relief from the headaches.

I'm so happy to hear you are already feeling the effects of the botox shots! Hallelujah! So great! Love how your BBD piece is coming out. It's so soft and pretty!

That is wonderful news about the shots helping, Vickie! I'm hoping and praying there will come a day when you are rid of the headaches for good. Snow Garden is looking so pretty -- and tiny!

Very pretty! I love your colour change and the floss skein on your photo is gorgeous!

Oh wow! That is great news... And very promising going forward. I am so happy for you :) Here's to a pain free future!
Snow Garden looks lovely!

Great news abou the pain.
Loving the delicate colours you have using.

Love the peacock :) And even more, I love hearing that your pain is dissipating!! Hooray!

Great news about the headaches, at last!
Love the delicate colours you are using for your Snow Garden, such a lovely project.

Snowgarden is looking so very pretty and yay re the botox!

I love the colour changes you made. If you want your stitched piece to look like on the picture you always have to make colour changes on BD designs.
Great news that the botox already starts to work. I'm so happy for you, Vickie.