Hi friends! I finished Snow Garden this weekend.  I have not personalized it. I am leaving the names and dates til the end of the whole thing I do believe. I am not sure yet who I am memorializing in this sampler. I have time to figure that out. ;)
On to Valentine Rose now! ❤️️ I pulled the flosses and made more floss modifications. Not my favorite thing to do at all. It is a necessary thing to do when stitching BBD patterns with DMC if you want your piece to look like the pattern picture though.

I was on the waiting list at our library for the third and last book in the trilogy by Rachelle Dekker, The Returning. It is a new book, just released. It was good, but I must say predictable. Did I know everything that was going to happen? No. But almost everything. I enjoyed the read though. Her writing style is very much like her father's, Ted Dekker. However, Ted is so very, very, very talented. He is awesome.He is NEVER predictable. He is my favorite author. She is not Ted. Just saying.
They say the Awakening is coming.
That she’s the key.
But can she find her identity in the light
Before she perishes in the dark?

Twenty years have passed since Carrington and Remko Brant’s baby, Elise, was kidnapped and they were forced to leave her captive in the Authority City. Though they fled with the Seers far from Authority reach, they’ve never given up hope of rescuing their daughter from the man who betrayed them. Now Authority President, he’s ushered the city into a new era of “peace”―one where the Scientist Roth Reynard’s Genesis Serum has eradicated all memory of emotion or rebellion.

But the mysterious Aaron and his Seers are once again on the move, threatening the illusion the Authority has worked so hard to build. As the Seers send seven chosen warriors to rescue Elise and bring restoration to the Authority City, the lines are drawn for a final battle between light and darkness. The key to ultimate victory may rest within the strangely powerful girl who has felt forgotten but was never abandoned―a truth she’ll need to wage war against the powerful forces of evil.

Have a most wonderful week my friends! I am so glad you came to visit. 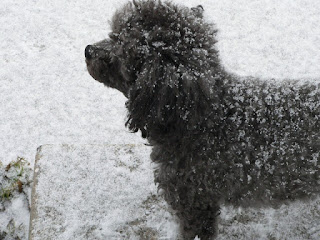 Always nice to stop by and visit with you

Dear Vicky,
that "Snow Garden" looks so absolutely personal "you". I love how it turned out, although I am not the big lover of pink (anymore ...)
Now I am very curious how you will stitch the "Valentine Rose"!

Your Snow Garden looks just lovely! One month down...grins! The pink that you added is just perfect for you and looks really pretty with the finished piece! You have a real talent my friend for color!

I hope you have a happy Monday and a good rest of the week! It is raining today here...hmmm stitching time?

Such a pretty finish.

Congratulations on your finish! Snow Garden looks fabulous. I look forward to seeing your progress on Valentine Rose. Hope you have a wonderful week, Vickie!

Snow Garden is so lovely. Your stitches are always perfect! I look forward to seeing what you stitch up next. ((hugs)) Wishing you a day filled with many blessings sweet friend. :)

Your stitching grows fast and it looks wonderfull. When you're an experienced reader and have read a lot of books as you have, it's often easy to predict the storyline. It happens to me so now and then too. Love and greets, Nienke

How pretty, Vickie!! I look forward to seeing the second one--I'm sure your conversion will be lovely :)

Snow Garden turned out to pretty.

Snow garden is so beautiful! :)

A beautiful beginning to your project.

Hi Vickie : What a lovely design, I love Blackbird Designs, they are so creative.
I am looking forward to seeing the finished Sampler.
I hope you are well.

Snow Garden look awesome! We awoke to a snow covered garden this morning. Haven't seen the ground covered in the white stuff since mid December.

Snow Garden is a sweet little design! Nicely done!
We have quite the snow garden today. Oh my goodness, having snow around this long is not what we're used to. I'm trying to keep in mind that God must have a reason for putting us through this, lol! Probably trying to slow us all down and have some patience.

The Snow Garden is so pretty! I always love patterns with peacocks-the tail feathers are so fun on this chart!!

What pretty soft colors Vickie. Your puppy seems to like snow far more than my cats!

It's so pretty! Congrats on the finish :D

Wow--you finished that one so quickly, and it looks wonderful! Congrats! Hope the headaches are still going away! Hugs!

Congratulations on the Happy Dance. Snow Garden is beautiful, as is Mabel in the snow!

It's beautiful! I have no confidence in changing colors so I would be doomed on using DMC. But truthfully, the overdyeds are so variable in color that I think it's rare you can achieve the model picture anyway.

So great to see Snow Garden already finished. You stitched it very fast and it looks absolutely great. I also decided to leave most of the personalization until the end. But I already have collected some names that I want to insert.

That looks so lovely in pink!