Hi friends! I would like to show you my progress on AotH so far. Here is my Snow Garden. Different than anyone else's that is for sure! I have completed the border. 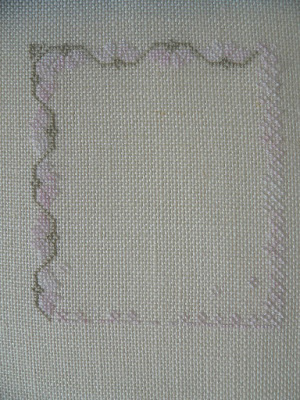 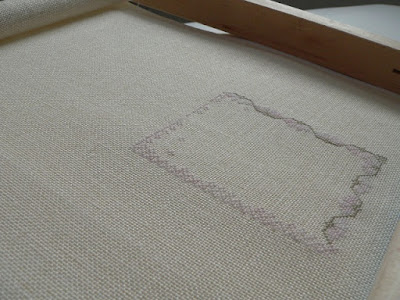 Why is my Snow Garden pale pink and white?! Because I am whackadoo? Maybe. I think it is because I used cream linen and I tried using the called for DMC 739 and Ecru and neither one showed up on this linen. Then I tried DMC 3865, 3770, and white.These did not show up either. I was distressed at this point. Having ruled out all of my DMC,I went through my VMSS flosses and there it was. Just the name made me smile. ♥Baby Pink & White♥ I am using this floss whenever 739 and Ecru are called for. 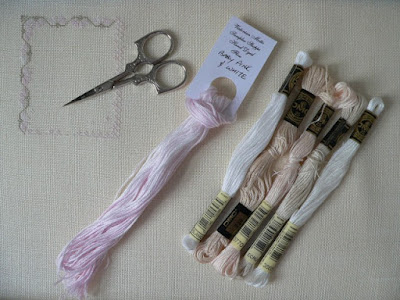 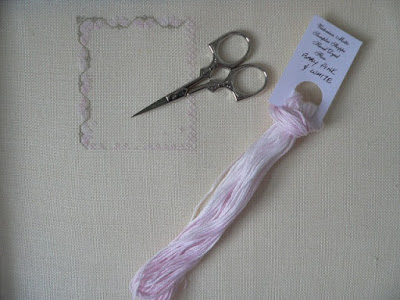 Among The Mad, book six in the Maisie Dobbs series is a great one! HA! They are all great! ;) Well anyways, I really liked this book a lot. It makes you think about the mental trauma wartime soldiers have FOR LIFE. It seems this "problem" is one people do not want to see or deal with for many lifetimes now and in many countries. Sad.Very, very sad.

In the thrilling new novel by the New York Times bestselling author of An Incomplete Revenge, Maisie Dobbs must catch a madman before he commits murder on an unimaginable scale
It's Christmas Eve 1931. On the way to see a client, Maisie Dobbs witnesses a man commit suicide on a busy London street. The following day, the prime minister's office receives a letter threatening a massive loss of life if certain demands are not met―and the writer mentions Maisie by name. After being questioned and cleared by Detective Chief Superintendent Robert MacFarlane of Scotland Yard's elite Special Branch, she is drawn into MacFarlane's personal fiefdom as a special adviser on the case. Meanwhile, Billy Beale, Maisie's trusted assistant, is once again facing tragedy as his wife, who has never recovered from the death of their young daughter, slips further into melancholia's abyss. Soon Maisie becomes involved in a race against time to find a man who proves he has the knowledge and will to inflict death and destruction on thousands of innocent people. And before this harrowing case is over, Maisie must navigate a darkness not encountered since she was a nurse in wards filled with shell-shocked men.

Thank you for your encouragement friends! About another week to go now. Then I should start to feel some relief from the Botox shots IF I am going to have relief from the shots. I may not. That is very likely the first time you receive the shots. I have my next appointment set up for more shots in 3 months.

I hope you have a wonderful weekend my friends! I will be stitching away on Snow Garden.

Stunning stitching as always :) Love your colour choice, so delicate. I really do hope that the first round of shot will work for you! Sending lots of good vibes.

I've seen that piece done in a number of interesting color combinations. Pink and white is perfect for you.

Nice start, this is going to be so pretty.
Love the Snow Poodle. :)
Marilyn

Looking good...love you're making the piece your own!

Well of course, there had to be pink :)
Have fun, this is a great start!

Oh thank you, dear Vicky, for showing the first pict!
It looks wonderful so far. Soft and sweet!

Oh I like that! Very you to have a bit of pink instead of just ecru! Continued prayers that your headaches go away.

Yay it's lovely to see you stitching this! I love your progress. It is so pretty.

Your stitchiing is very pretty,I am really looking forward to an update.
I hope you have a good stitchy weekend,Vickie.

You are off to a great start on Snow Garden. I think your pink & white floss thread looks good and so very perfect for you. Your Frosty the Snow Poodle graphic made me grin. Enjoy your weekend, Vickie!

Your start on Snow Garden is just lovely and it is just perfect for you! I love it...soft and sweet! It is going to be such fun to watch you stitch this sampler!

I am praying so hard that those shots work! I just am so hoping relief is on the way for you my friend!

Enjoy your weekend stitching on Snow Garden...I am hoping for stitching time too...grins!

Sending lots of hugs your way!

Wonderful start.
I like your colour change.
Happy Stitching.

Beautiful colors and good start. I am still keeping my toes crossed (my fingers are for stitching) that all will be well with your headaches soon.

Terrific colour choice. You do need to see the stitching and enjoy what you're doing. Sounds like another great story.

I love your floss choices! I wish I had changed mine for this block. Hmmm...there is still time to do that! :)

Hi Vickie: I like the color you chose, whackadoo no just a smart Lady.
I have changed my color threads many times.
I hope you are doing well and have better weather.

Your color changes are perfect! I'm looking forward to seeing your progress on this huge project! It will be beautiful!

I love your color choices for Snow Garden. I have had that problem with the charted color not showing up. You did a good job replacing!

Love the colors you are using! Pink is my favorite color too. Hope the Botox works for you.

A lovely start. Looking forward to seeing more of your progress.

Your stitches look very delicate, lovely! The changes are far better, I guess. Happy stitching and hopefully a quick improvement because of the shots!

Have a good weekend & hugs, Carolien

The color of your fabric is lovely! Your border looks so promissing... Love and greets, Nienke

These are beautiful colours for YOUR Snow Garden! I'm so looking forward to seeing your progress on it.

Oh, I love the Baby pink for the border - just perfect for you, my dear.

Vickie, it's going to be gorgeous!

Oh Vickie, you have started your Anniversaries. How tiny your first block looks.
I have to say that I also had trouble with the colours of the first anniversary and I also changed some of them as far as I remember. I love your thread colour choice.

Such a pretty colorway you have chosen, Vickie--it couldn't be more perfect for you :) Glad you are enjoying this huge project!

You are off to a beautiful start, Vickie! And you are in my prayers every day -- hugs. : )

Lovely progress, it looks so delicate.

I'm also currently working on AotH!:) I love the substations you made, they turned out so pretty!

Those are such pretty and delicate colours, perfect to personalise the design.
BTW, did you finish collecting all those pink fabric pieces?

What a pretty colorway, Vickie! Can't wait to see how it comes together. :)

So very pretty, Vickie!! I love that color, too. It's perfect. I am praying that your shots help you and that you won't have the headaches anymore.

Love your stitching! And don't you just love VMSS? I have bought a lot of her thread and I also joined one of her floss clubs this year. Last year, I had he chance to meet Nancy and she is such a sweet, sweet person. I also finished the first book, Maisie Dobbs, and I enjoyed it. I have orderd #2 and #3 from my library and should be receiving them soon. At the same time, I checked out Pride and Prejudice which I had never read even though it is one of my very favorite movies. The book was very good, and I started it one day and finished it the next. The problem with me having books around is that I don't get any stitching done if I am readying. Praying for positive results for you from the shots. Happy stitching, my friend...................

I am new to your blog and I love your stitching....but what does Aoth stand for??