Hi friends! I began Valentine Rose. I am not sure I should have included the eyelet stitches in the roof of the house. You really cannot see them and now the roof appears messy to me. :(  Well, now I know. Stitching these samplers one over one present different challenges! 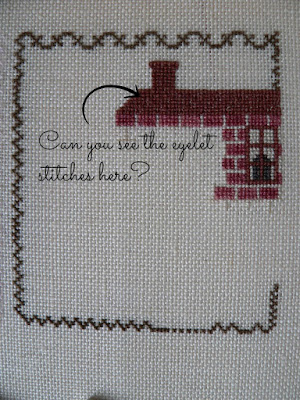 I did change the floss color of the roof.  3781 was the DMC recommended. Way off from the pattern picture. So I did a floss toss and chose 632. Which seems much lighter in the below picture, but as you can see above, looks a bit darker once stitched up as the roof. I used CC Clay Pot for the bricks in this pattern because I already had it in my stash. It was a gift from our friend Anne. :) I love the way it is turning out. 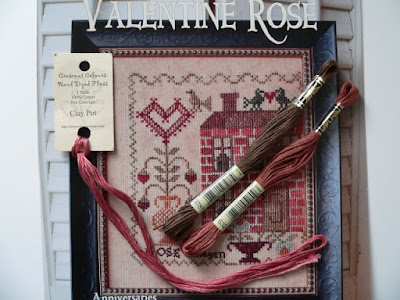 I went back and added the chimneys to the house in Snow Garden. As I stitched the border to Valentine Rose, I glanced over to Snow Garden and it hit me! I forgot the two chimneys! No one noticed or said anything. ha! Well, it is fixed and all better now. :) 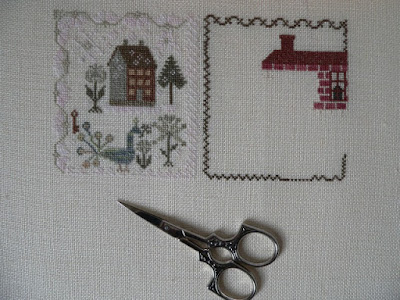 Look what arrived in the mail this week all the way from Australia from  our friend Kaye. She had a giveaway in which I won these sweet Margaret Sherry charts. Kaye included a few extra goodies. 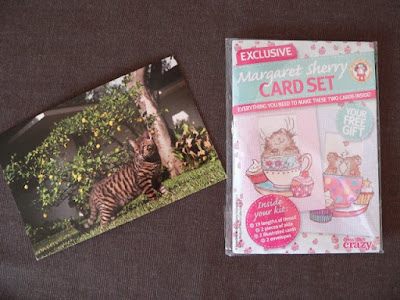 Isn't this bunny pillow she stitched up just darling? This kookaburra tea bag rest was admired by us all and will be put to use by us all! Thank you dear Kaye! 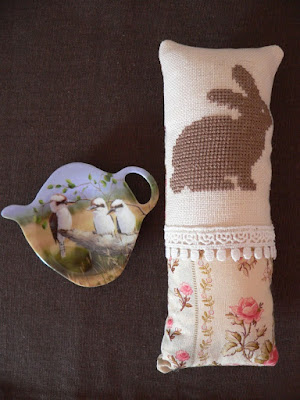 So now I have read book 8 in the Maisie Dobbs series, A Lesson in Secrets. Good read? You betcha!

From New York Times bestselling author Jacqueline Winspear, now available in paperback— the latest episode in the New York Times bestselling series, Maisie Dobbs’ first assignment for the British Secret Service takes her undercover to Cambridge as a professor, and leads to the investigation of a web of activities being conducted by the emerging Nazi party.
Private investigator Maisie Dobbs receives her first assignment from the British Secret Service in A Lesson in Secrets, the eighth book in Jacqueline Winspear’s award-winning mystery series. Sent to pose as a junior lecturer at a private college in Cambridge, she will monitor any activities “not in the interests of His Majesty’s government.” When the college’s pacifist founder is murdered, Maisie finds herself in the midst of sinister web of murder, scandal, and conspiracy, activities that point towards members of the ascendant Nationalsozialistische Deutsche Arbeiterpartei—the Nazi Party—on Britain’s shores. An instant classic, and sure to captivate long-time Maisie Dobbs fans as well as readers of Agatha Christie, Elizabeth George, and Alexander McCall Smith, A Lesson in Secrets is “a powerful and complex novel, one that will linger in memory as a testament to her talent and her humanity” (Richmond Times-Dispatch).

Murphy got his haircut by Mary yesterday.You can see his picture down below. He has a few extra chin hairs she was not able to get. Wonder why? Think teeth! Mary says he is fast for an old man! YOU DON'T SAY! HA! I KNOW!! I  have scars on my hands to show it! At least she did not get bit. I will trim up his chin at some point. He looks good for a 13 1/2 year old poodle, right?! 🐩

I want to thank you for stopping by and visiting with me. It is so nice of you to leave me a comment to brighten my day. Thank you so much! I do hope you have a wonderful weekend my friends! 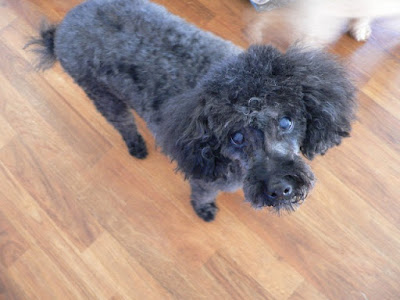 How nice to have a stitching pal in Australia! Your AotH is coming along very nicely; I like the texture in the roof!
How did you get that writing on your photo....pretty neat!
Have a good weekend!
Stasi

Great start on the next design.
The colours look lovely and it's coming along really nicely.

You've made a nice start to your next house! Looks great! I can barely see the eyelet stitching! Murphy looks good, all nicely groomed. I think our granddog Rusty is difficult to groom, also. He was a rescue, and still has behaviors from that terrible time in his life. Enjoy the weekend! Hugs!

Murphy looks very distinguished. Great start on the next block, Vickie! While I can't distinguish the eyelets, I do like the added texture they provide to the roof. Have a wonderful weekend!

How nice to get gifts from Australia! Valentine Rose is looking great. You've got more ambition than me to stitch such a huge project over one, lol. Murphy looks dapper!

Your latest block is off to a great start, Vickie--you are doing a lovely job with the color changes, too!

And what nice gifts from Kaye--enjoy! Hope you have a lovely weekend and your headaches behave themselves :)

Your needle work is lovely. :) I like the colors you picked.
Mr. Murphy is adorable. Where are the other two today? Love seeing their pictures.
Thank you for the prayers sweet friend, they are most welcomed. Blessings always.

I cannot see the eyelets,your Valentine piece is lovely and I did not see the chimmneys were missing on Snow Garden :)
Lovely gifts from Kaye,congratulations on your giveaway win.
Murphy is handsome.

The eyelets seem to make the roof more textured, like an older uneven roof. Which it is supposed to be I guess.
I always forget chimneys too, don't know why!

Lovely gifts from Kaye to accompany your chart win.

Your poodle comments made me smile Vickie, they are feisty little dogs. Brandy once bit me on the thumb and it was extremely painful.

Hi Vickie: Murphy looks so sweet, he is in pretty good condition for 13 and a half.
I love the Valentine stitch is a sweet design, I have never stitched the eyelet stitch, I can never seem to get them to look good.
I hope it was warm in Wisconsin today 45 degrees here in lovely Annandale Mn. Yahoo.
Very sweet gifts, you received, I am a tea lover, that teabag holder is lovely.


Hugs to you
Catherine

Your roof looks just fine to me but it does have to please you. Such a nice win from Kaye. I always enjoy her blog very much.

Your BB designs are already looking so pretty; they have such a way with color and design - just love their charts. The stitched bunny pillow is adorable and I love the tea bag caddy; so useful and cute too. I the 8th book in the MD series the last one? I just got the 2nd and 3rd books ordered in from my library; I had no idea there were that many in the series. Are there more than eight? How are the headaches doing? I hope they are better. I think of your often and pray that you are having good days. Happy stitching.............

Lovely start on your stitching looks beautiful.
Have a lovelly weekend hugs.

Beautiful stitching, love the colour choice/changes. I can tell there is something different on the roof but to be honest I wouldn't know they were eyelet stitches from the photo. The prizes and gifts from Kaye are lovely. Have a good weekend.

Murphy looks great! What are a few chin hairs between friends? lol! Love how your stitching is coming along. I'm pretty sure I can see the eyelets even in a small picture. Roof looks fine to me! Nice gifts from Kaye too!

Oh Vickie, Murphy looks so handsome! Such a distinguished gentleman:)

Your stitching is coming along beautifully! I love block two and your color changes! I never even noticed the missing chimneys...lol!

What lovely gifts you received! I think the little stitched bunny is adorable ....just in time for Spring!

I hope you are having a nice weekend....sending hugs and love ❤️

You are doing a great job, Vickie! And yes I think I can see the eyelets. Missing chimneys - I never noticed. : ) I'm just amazed at the tiny stitches. You received some very nice gifts from Kaye. And Murphy is a very handsome fellow - such an innocent face - he doesn't look like a biter. : )

The colours in your new block are so pretty Vickie! I can tell you are really enjoying this one. Gorgeous gifts from Kaye too.

Beautiful start!! I cannot see the eyelet stitches in the roof... it looks very hard to make them one over one! I really like the colours choice for Valentine Rose!
Pretty gifts, vickie! How sweet that little pillow!

No, I can't say I see the eyelet stitches in the roof, but it still looks good! I like the colour you chose for the brick, I think it looks better.
Oops on the chimneys, but easy enough to add them!
MS charts are adorable, lucky you! And the pillow is very sweet.
I haven't read the other book yet, but will keep the series in mind.
Awe, Murphy looks great and I think he knows it!

I admire your ability to stitch over one. It drives me crazy, but then my eyesight isn't that good. Congrats on the gifts :)

Grat start on Valentine Rose, Vicky! I like the colors you have chosen!
Nice giveaway win! The rabbit pillow is so cute!

Have a wonderful new week!

A lovely start to your Valentine Rose design and congrats on receiving your gift from Kaye!

So glad that you enjoyed them, my dear.

No, I hadn't noticed that the chimneys were not on the roof, lol. But now you fixed it.
Great start on the February anniversary. And you are certainly right, those specialty stitches might be a challenge when stitching over one.

Valentine Rose is gorgeous! The colors are so pretty. Enjoy your goodies from Australia! :D