Hi friends! I have a sweet, tiny Spring finish for the cubby shelf to share with you. 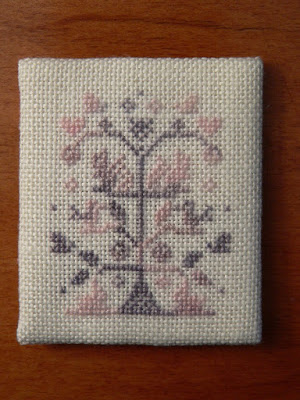 This is a free pattern from Soed Idee. This exact pattern is no longer available on her site. If you would like to see the other patterns that she has for free, go HERE

I stitched this one over one with Olde Willow Floral Fantasy on 28ct white linen and it is in my cubby shelf.😊

I have also accomplished another autograph on my brother's 🎶Bluegrass Bibs🎶. 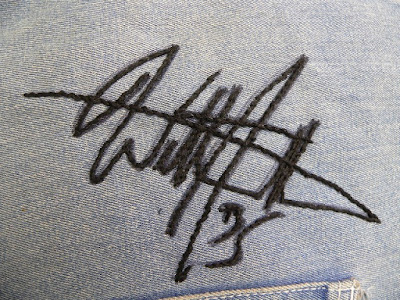 This is William Apostol. Also known as Billy Strings.

What can I say? Two more The Cat Who books. I love this series so much!
Jim Qwilleran and his Siamese sleuths, Koko and Yum Yum, investigate the disappearance of a wealthy railroad buff in this mystery in the New York Times bestselling Cat Who series. Floyd Trevelyan’s historic steam locomotive, newly restored, is the newest attraction in Moose County. But the excitement is eclipsed by shock when Trevelyan disappears—along with millions of investors’ dollars. Puzzled and suspicious, Qwill’s trying to make a connection between the missing millionaire and a recent murder at a nearby railroad tavern. Now, with the help of his cats, Koko and Yum Yum, he’s about to prove that the police are on the wrong track.

In this mystery in the bestselling Cat Who series, a murder sends Jim Qwilleran and his cats, Koko and Yum Yum, on a trail that will demand all their feline intuition and mustachioed insight... With the Great Food Explo approaching, there’s a lot of scrumptious activity in Moose County. Residents can’t wait for the restaurant openings, the cheese-tasting, and the bake-off, among other festivities. But there’s nothing as tasty as a morsel of gossip, so when a mysterious woman moves into the New Pickax Hotel, the locals—including Qwill—indulge in lots of speculation. But then a bomb explodes in her room, killing the hotel housekeeper—and now Qwill and his kitty sidekicks, Koko and Yum Yum, must put aside the fun and figure out who cooked up this murderous recipe...

I am now working on a plastic canvas poodle magnet. Something I have never done in my life! I thought it would be very easy. WRONG! Oh my goodness! So putzy and time consuming. I cut two fingernails using nippy nippers! Very sharp! 😳 I am making this for Jim my senior friend at the nursing home. Henry and I went to visit him and also Mary this last weekend. I was so very touched to see that he has the Valentine heart that we gave him last year hanging on his door. He had to have asked one of the staff to do that for him. Here is a picture of the Valentines I gave to seniors last year. See Henry?😊 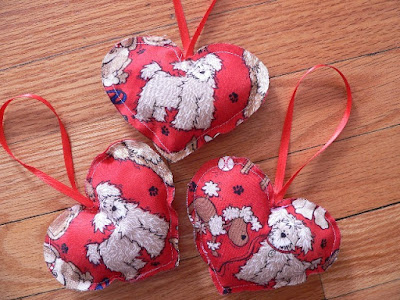 If I feel like it, I will make another poodle magnet for Mary and then another for myself. I have to say that so far plastic canvas is not for me. (I am sure the more straight forward patterns are so much easier.)

If you abide in Me, and My words abide in you, you will ask what you desire, and it shall be done for you.  John 15:7

Have a great week my friends! I hope to! Thanks for stopping by! 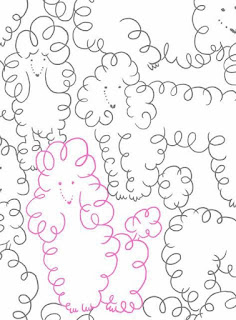 Hi Vickie,
The little pattern is really cute, I like the little animals so much. A great autograph for your brother, it will be something special.
Have a nice week, Hugs Martina

I love the spring stitching,and the colours too!

Have a Nice week,
Evelyne

So cute, love the soft colors.
Not sure how you stitch those autographs, some look hard to comprehend, but they look great!
Have a great week!
Marilyn

Wonderful your little spring stitching and nice finish.
Another pretty autograph for your brother.
Have a nice new week. Manuela

Such a sweet finish! And you're doing great with those signatures for your brother too! I have the Mrs. Bird book on my to read list, but I've never read this series. Just heard about it. Somehow mysteries have never been my thing.

What a sweet spring addition to your cubby, Vickie! Good for you on getting another signature finished! Go Vickie! Would perforated paper work instead of the plastic? I hope you have a fabulous week.

I know what you mean about plastic. I made the mistake of giving my granddaughter a plastic project for her first stitching try. It is unyielding and way more difficult to use than fabric. Love the Spring finish for the cubby shelf!

Congrats on another cute finish Vickie. Also congrats on your brothers pants.

Another lovely stitch for your cubby shelf .
Have a lovely week sweet friend.

Your springy piece is a perfect addition to your cubby!

What a great little piece for your cubby. Sometimes a cozy mystery is just the thing. I bet those cat books would be fun.

Those little Valentine hearts are adorable. I'm sure the seniors cherish them.

The Spring finish is so darling!

Another sweet finish, Vickie! I've never done plastic canvas either, but I saw your finish on IG and it did turn out very cute so the effort was worth it :) Good luck with the other two--perhaps they will be a bit easier now that you've done one!

Vickie, Such a sweet stitch for your little cubby. Thanks for the link. Another Bluegrass autography, how many more do you have to do yet?

Lovely little Spring freebie, pretty colours.
Sorry your stitching is biting back though!

Oh, I see the grumbles with the canvas now! I can't remember if I had those problems or not, but what I did was very simple. Hopefully your other two won't be so ornery!