Hi friends! I have been blessed with an amazing gift by our friend Robin
She sent me all of these patterns! 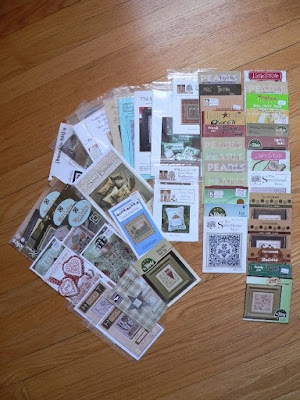 Is this NOT a super, generous gift?!?! As with all patterns that Robin so generously passes onto me, once I stitch them, I pass every, single one of them on to you! I have already sent two of them to our friend Stasi, as I knew I would not be stitching them and I thought she would like them. And she does! She has already stitched one up!😊  THANK YOU ONCE AGAIN ROBIN!!


Now I would like to show you the gift that I made for Robin. 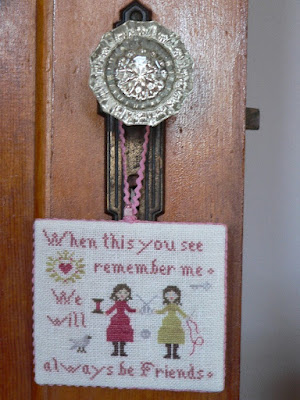 I don't know if you can see or not, but I have the green eyes and Robin has the blue eyes.😉 This free chart is available HERE  There are several other sweet charts available for free on this blog too. Check them out!

Well by now you know what is coming right? A book by Adriana Trigiani means I liked it a lot, and I did! It was a very good story.
It’s 1949 and South Philadelphia bursts with opportunity during the post-war boom. The Palazzini Cab Company & Western Union Telegraph Office, owned and operated by Dominic Palazzini and his three sons, is flourishing: business is good, they’re surrounded by sympathetic wives and daughters-in-law, with grandchildren on the way. But a decades-long feud that split Dominic and his brother Mike and their once-close families sets the stage for a re-match. Amidst the hoopla, the arrival of an urgent telegram from Italy upends the life of Nicky Castone (Dominic and his wife’s orphaned nephew) who lives and works with his Uncle Dom and his family. Nicky decides, at 30, that he wants more—more than just a job driving Car #4 and more than his longtime fiancée Peachy DePino, a bookkeeper, can offer. When he admits to his fiancée that he’s been secretly moonlighting at the local Shakespeare theater company, Nicky finds himself drawn to the stage, its colorful players and to the determined Calla Borelli, who inherited the enterprise from her father, Nicky must choose between the conventional life his family expects of him or chart a new course and risk losing everything he cherishes. From the dreamy mountaintop village of Roseto Valfortore in Italy, to the vibrant streets of South Philly, to the close-knit enclave of Roseto, Pennsylvania, to New York City during the birth of the golden age of television, Kiss Carlo is a powerful, inter-generational story that celebrates the ties that bind, while staying true to oneself when all hope seems lost. Told against the backdrop of some of Shakespeare’s greatest comedies, this novel brims with romance as long buried secrets are revealed, mistaken identities are unmasked, scores are settled, broken hearts are mended and true love reigns. Trigiani’s consummate storytelling skill and her trademark wit, along with a dazzling cast of characters will enthrall readers. Once again, the author has returned to her own family garden to create an unforgettable feast. Kiss Carlo is a jubilee, resplendent with hope, love, and the abiding power of la famiglia.

I have switched to Spring stitching.That means 🐇 and 🐥! We will see how long I go without 🐩. HA!

But the fruit of the Spirit is love, joy, peace, longsuffering, kindness, goodness, faithfulness, gentleness, self-control. Against such there is no law.  Galatians 5:22-23

Have a super weekend my friends! I am so glad you stopped by. God bless you! 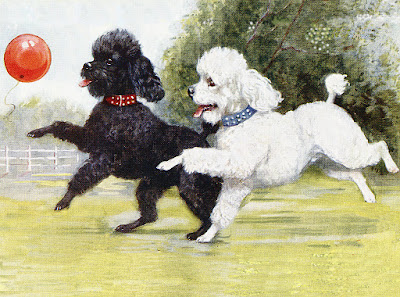 A great gift from Robin, I'm looking forward to seeing the individual motifs. Very nice, too, the gift of friendship.
Have a nice weekend, my friend,
Hugs Martina

What a fab gift from Robin .
Love your friendship stitch ,enjoy your day big hugs.

What a great gift from Robin for you.
I like your friendship stitching very much.
Hugs, Manuela

What a great gift!
Looks like you very own market day!
Enjoy all of them.
Your Friendship piece is too cute.
Marilyn

Such a sweet friendship piece; I know Robin loved it! I checked out the freebies from that stitcher and there are some great ones--thanks for the link! I hope to post a photo of the stitched piece soon on my blog. Thanks again for the "pay it forward"!

Vickie, thank you again for my beautifully stitched and finished friendship piece. It makes me smile every time I look at it. Thank you for providing the link to her web site; there are several that I want to stitch down the road. Enjoy the charts and I hope they bring you many hours of pleasure.

What a wonderful gift! Robin is such a sweetheart.

Have a wonderful week!

A generous gift indeed. Looking forward to your Spring stitching...are you sure there will not be a Spring poodle I the mix?

A wonderful gift from Robin. You're certainly going to be busy!

What a wonderfully generous gift from Robin, so many lovely charts.
I love the design you stitched for her in return.

Vickie: What a wonderful gift, she is very generous,
I totally love the design you stitched for Robin.
Yeah spring is here.
Beautiful Scripture choice.

What an amazing gift! Glad you'll be working your way through them and that you were able to rehome the ones you wouldn't work up! Your thank you gift is super sweet and I love the door knob. :)

Iunno, I think poodles go with bunnies and chickies, yes?

So sweet of Robin to send you the charts! The stitched piece you sent to her is adorable and I love how you personalized it to resemble the 2 of you!

Very generous gift and such a pretty thank you, you made in return.

RObin is a very generous person and she outdid herself with that stash she passed onto you!! I can't wait to see your progress, your set for a long time!!

Wow, plenty to keep you busy! (Like that was a problem before!) How very generous of Robin and what you made for her is perfect. Thanks for sharing the site for it.
Another interesting book, but I don't think Nathan would like this one!

Wow, what a generous gift! I often wonder what to do with all the patterns that I've finished with. I hope that you find the time to do plenty of them... I have more than I can get through in a lifetime I think!

Robin is the most generous and thoughtful person I know. I know how much you loved getting that super box of goodies and will have a blast stitching them all. I love the thank you gift you made for Robin and I know she did too. RJ