Hi friends! I stitched up February Flip It by Lizzie Kate. This pattern was a gift from our friend Robin. 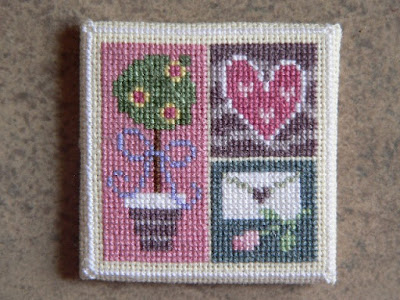 I stitched this one over one on 25 ct cream evenweave linen with DMC. I made a few color changes. There are also a few errors in there.😬I tried and tried to correct them and said to heck with it! It looks fine! It is so tiny, who will know? This is now in the cubby shelf. I have not forgotten that you would like to see the cubby display for February. It has been overcast for days. I cannot get a good picture yet. Maybe next post!

After the Valentine piece I dragged out the Bluegrass Bibs.🤪 Yes, the project that never ends! I stitched two more autographs. Ronnie and Garnet Bowen. If you are into Bluegrass you will recognize Ronnie. I have stashed the bibs away again. There are more autographs to stitch. And they are undecipherable and much larger.😒 I am doing this because I love my brother. 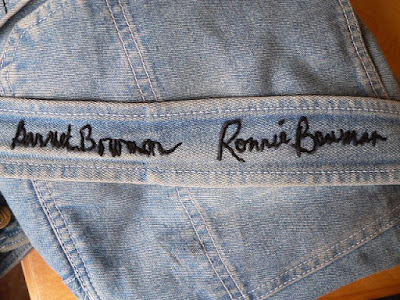 Have some of you read The Indigo Girl by Natasha Boyd? I love historical fiction, don't you? This was a good one. A story I was not familiar with at all.

An incredible story of dangerous and hidden friendships, ambition, betrayal, and sacrifice. The year is 1739. Eliza Lucas is sixteen years old when her father leaves her in charge of their family's three plantations in rural South Carolina and then proceeds to bleed the estates dry in pursuit of his military ambitions. Tensions with the British, and with the Spanish in Florida, just a short way down the coast, are rising, and slaves are starting to become restless. Her mother wants nothing more than for their South Carolina endeavor to fail so they can go back to England. Soon her family is in danger of losing everything. Upon hearing how much the French pay for indigo dye, Eliza believes it's the key to their salvation. But everyone tells her it's impossible, and no one will share the secret to making it. Thwarted at nearly every turn, even by her own family, Eliza finds that her only allies are an aging horticulturalist, an older and married gentleman lawyer, and a slave with whom she strikes a dangerous deal: teach her the intricate thousand-year-old secret process of making indigo dye and in return -- against the laws of the day -- she will teach the slaves to read. So begins an incredible story of love, dangerous and hidden friendships, ambition, betrayal, and sacrifice. Based on historical documents, including Eliza's letters, this is a historical fiction account of how a teenage girl produced indigo dye, which became one of the largest exports out of South Carolina, an export that laid the foundation for the incredible wealth of several Southern families who still live on today. Although largely overlooked by historians, the accomplishments of Eliza Lucas influenced the course of US history. When she passed away in 1793, President George Washington served as a pallbearer at her funeral. This book is set between 1739 and 1744, with romance, intrigue, forbidden friendships, and political and financial threats weaving together to form the story of a remarkable young woman whose actions were before their time: the story of the indigo girl.

I am now stitching an Irish/Spring piece for the pedestal frame for next month.

Bless the Lord, O my soul; and all that is within me, bless His holy name! Bless the Lord, O my soul, and forget not all His benefits: who forgives all your iniquities, who heals all your diseases, who redeems your life from destruction, who crowns you with lovingkindness and tender mercies, who satisfies your mouth with good things, so that your youth is renewed like the eagle’s. -Psalm 103:1-5

Thank you for stopping by today my friends. I am so glad you did! I hope you have a nice weekend with nice weather wherever you are.

Hi Vickie,
That looks really great, especially I like the delicate rose in the envelope.
Mistake - no, no, that must be just like that. 😉
And the autographs have been great.
I've read historical novels before, soon I'll see if I can find an audiobook.
Have a nice weekend,
Hugs Martina

Have a lovely Friday.

Wonderful Valentine stitching. I love it. I can't see any mistakes.
Have a nice weekend, my friend.
Hugs, Manuela

The LK is so cute.
Very dark & gloomy here also.
Ready for Spring!
The Bibs will be a great project, what a great idea!
Hope you can decipher the other names.
Marilyn

Lizzie n Kate Stitch is adorable and continued good luck with those bibs! Many blessings....

Vickie, your February block looks great. Well done on getting two more autographs embroidered on the never ending project for your brother. Enjoy your weekend!

Vickie, your Lizzie Kate stitch is soooo sweet! Errors? I don't see any errors. I see it stitched exactly as it was meant to be. Isn't Robin a sweetheart?

Wow - what a cool project for your brother. That looks like a lot of hard work!

Congrats on the awesome finish Vickie. The bib looks great.

Wonderful addition for the cubby shelf. Your brother will be the never ending project!

I love your Valentine design. It looks great to me, I see no mistakes!! That sounds like my kind of book!!

Hi Vickie...
I love your February stitch! It is just “ perfect “ I would never even know there was a mistake in it. 🤗 When I was working on my Amish sampler when I was on chemo I totally miscounted on one of the quilts and I sure wasn’t going to fix it...lol. Now when I look at it just makes it more mine...💕💕

You are a wonderful, terrific and very patient sister to keep embroidering those names on those overalls! Oh my goodness this is LOVE!! They look wonderful!

I hope you have a good weekend my dear friend! Sending lots of hugs and love ❤️❤️

Hi Vickie: What an adorable design, I am looking forward to seeing this in your cubby shelf.
I have not read this book, I need to get through the pile I have now first, before looking for any other books.
Stay warm.

These little Flip Its look so neat Vickie, I like your choices.

Vickie, I love your new LK stitch and how kind of Robin to send it, it's perfect for you little cubby. Robin is such a generous and kind soul.

And your brother loves you!! It will be a treasure with all the signatures but more importantly the love you put into it.

Have a great weekend.

What a sweet Valentine finish Vickie, well done!
and thank you for suggesting what looks like a very good book

Love the Valentine Piece and I'm sure your mistakes are few. I know what you mean about loving your brother and doing this to make him happy. I did a very large piece many years ago for my oldest and he loved it so I know your's will too.

You are a sweet sister to stitch all of those autographs, Vickie! I'm sure you'd rather be stitching something pink!! Love your LK finish and I don't see a single mistake--would never notice :) Hope things clear up so you can get a nice photo of your cubby...

A lovely valentine stitch. You are a dear sister to lovingly stitch those autographs, it must be quite tough to stitch though that denim.
Have a lovely weekend.

I have to say..I love the idea of the autographs on the "bibs" and I know your brother appreciates it. It's funny how we can love to "stitch" but dislike doing menial tasks like sewing on a button or hemming a pair of pants. The LK piece is perfect..can't wait to see in the cubby!

What an adorable stitch! I see no errors, it looks great.
Yay for the finishing two more autographs, Good luck on deciphering the others!
Another interesting book, thanks for sharing.

Love this finish! Love over one. Speaking of bluegrass (you are such a good sister!), the Punch Brothers won a Grammy for best Folk album. Yay! The book sounds interesting! Have to look that one up.

Another beautiful stitching project! If there are errors in there, I sure don't see them. It's just gorgeous. I love seeing the autographs you share from your brothers collection on the bib. Such a labor of love on your part! I love historical fiction, too. Honestly, I just love to read good books! I love that you share your reading with us. It's fun to see what others are reading.

Errors, what errors? *squinting* I think that little envelope is darling in that stitch. I know how much you love working on those bibs. I feel like I'd have to have a thimble on every finger just to get through the fabric!

I love your Poodle Pic in this month; such a pretty dress!

Another cute finish for the cubby. There are no mistakes, merely personalisations!