Hi friends! I have finished March-Shamrock from Rainbow Gallery, the 2005 Cross Stitcher's Surprise Series. I chose my own DMC colors and once again omitted the charm since my finish is so little. I stitiched this one over one on 25ct cream evenweave. 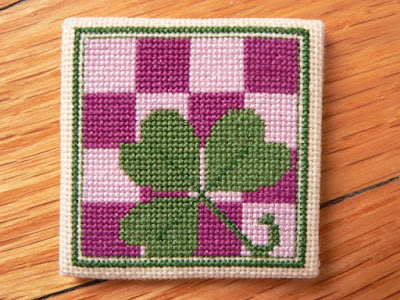 At the end of this week, it will go into the cubby shelf.😉

I am now getting close to a finish on a special gift for a special friend. I am really enjoying stitching this gift! It is going to be hard to give away!! Cannot share a picture just yet.

I really enjoyed this book! If you like Clark Gable and Loretta Young, two of the main characters in this book, you will enjoy this book. This book takes place during the golden age of Hollywood. Really interesting and really good.
Adriana Trigiani, the New York Times bestselling author of the blockbuster epic The Shoemaker's Wife, returns with her biggest and boldest novel yet, a hypnotic tale based on a true story and filled with her signature elements: family ties, artistry, romance, and adventure. Born in the golden age of Hollywood, All the Stars in the Heavens captures the luster, drama, power, and secrets that could only thrive in the studio system—viewed through the lives of an unforgettable cast of players creating magic on the screen and behind the scenes. In this spectacular saga as radiant, thrilling, and beguiling as Hollywood itself, Adriana Trigiani takes us back to Tinsel Town's golden age—an era as brutal as it was resplendent—and into the complex and glamorous world of a young actress hungry for fame and success. With meticulous, beautiful detail, Trigiani paints a rich, historical landscape of 1930s Los Angeles, where European and American artisans flocked to pursue the ultimate dream: to tell stories on the silver screen. The movie business is booming in 1935 when twenty-one-year-old Loretta Young meets thirty-four-year-old Clark Gable on the set of The Call of the Wild. Though he's already married, Gable falls for the stunning and vivacious young actress instantly. Far from the glittering lights of Hollywood, Sister Alda Ducci has been forced to leave her convent and begin a new journey that leads her to Loretta. Becoming Miss Young's secretary, the innocent and pious young Alda must navigate the wild terrain of Hollywood with fierce determination and a moral code that derives from her Italian roots. Over the course of decades, she and Loretta encounter scandal and adventure, choose love and passion, and forge an enduring bond of love and loyalty that will be put to the test when they eventually face the greatest obstacle of their lives. Anchored by Trigiani's masterful storytelling that takes you on a worldwide ride of adventure from Hollywood to the shores of southern Italy, this mesmerizing epic is, at its heart, a luminous tale of the most cherished ties that bind. Brimming with larger-than-life characters both real and fictional—including stars Spencer Tracy, Myrna Loy, David Niven, Hattie McDaniel and more—it is it is the unforgettable story of one of cinema's greatest love affairs during the golden age of American movie making.

Our weather remains the same here in Wisconsin. Cold with snow.☹️ Oh well. Nothing new. That is to be expected around here. Spring is a ways off for us.

I do hope you have a great week my friends. I thank you for stopping by. I am so glad you did! 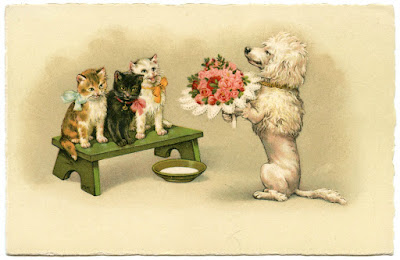 The small shamrock looks so cute, and your colors fit perfectly.
I got a book by Charlotte Link on Friday, a thriller, let's see how it is.
Have a nice week, Hugs Martina

A lovely stitching for March. Nice colours.
Hope you have a good new week.
Hugs Manuela

It's unseasonably warm and sunny here, not sure we have seen the back of winter though. A sweet March stitch.

This is so cute, love the colors.
It really sets off the Shamrock.
Marilyn

Yay, shamrocks! You chose great colors. Did you guys have the crazy wind over the weekend? We about blew away.

Another sweet finish, it looks so nice and bright!

Such a cute shamrock!
Hugs

Congrats on the cute finish Vickie. I love the colors.

Very cute. I always enjoy seeing what you are making. ((Hugs))

Another sweet, tiny finish for your cubby, Vickie--can't wait to see what your March cubby looks like :) Enjoy your week--hope it warms up for us soon!

Your Shamrock finish is adorable, Vickie! I hope you will share a picture of your March cubby sometime during March.

Love the finish! Don't know how you manage with one over one all the time. It's never been my favorite, although I love how it looks. The book sounds interesting. I always enjoy historical fiction.

Very cute, Vickie! I really like the contrast of the pink/fushia with the green. So cheerful! And now you can check "St. Patrick's Stitch" off your list! :) And your March decorating has begun! :)

What a darling shamrock piece for you cubbie! I love it and love the colors!

That book looks like something I would enjoy. I'm a huge Loretta Young fan and so enjoy watching her old tv show. I also love her movies, but her tv show had such a wonderful message of hope and faith! I'll definitely check this book out!

Stay warm and know I'm praying for you!

Very cute shamrock stitch and I love the colors, too! I'm sure it will look great in your cubby shelf display.

Ha! Figured out I have to logged into Blogger for profile to work. Only took me a million years. LOL
Great job on your finish.
Lots of rain here again. Stay nice and toasty warm.

A sweet stitch and finish.

I love the colour combination on your new finish! Very pretty, Vickie!

Lovely shamrock stitch Vickie. It will look wonderful in your cubbie. Great color choices too. RJ

Sounds like your as ready for Spring as I am, but I’m nervous too. March is our month for lots of spring rain. We’ve had almost nothing but clouds, rain and flooding for the entire month of February. I can count on one hand the sunny days last month. Fortunately, there are lots of lights in my house and stitching that makes my heart smile. 🙂. Judy

Another lovely cubby finish for March.