Hi friends! I am waiting, waiting for my linen to arrive for my AotH. So I began stitching on 'Forever Be My Always' By Emma Congdon. Here is my progress thus far. 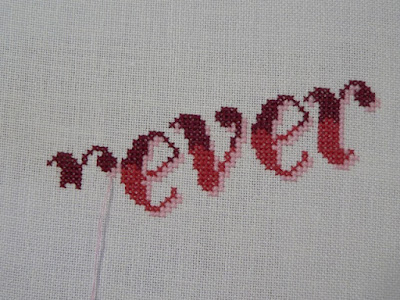 This is two over two on 28 count linen.

Last week I finished audio book number 4 in the Maisie Dobbs series, A Messenger of Truth by Jacqueline Winspear. Yes, I am quite addicted to this series! What can I say? Read it!

Maisie Dobbs investigates the mysterious death of a controversial artist―and World War I veteran―in the fourth entry in the bestselling series
London, 1931. The night before an exhibition of his artwork opens at a famed Mayfair gallery, the controversial artist Nick Bassington-Hope falls to his death. The police rule it an accident, but Nick's twin sister, Georgina, a wartime journalist and a infamous figure in her own right, isn't convinced.
When the authorities refuse to consider her theory that Nick was murdered, Georgina seeks out a fellow graduate from Girton College, Maisie Dobbs, psychologist and investigator, for help. Nick was a veteran of World War I, and before long the case leads Maisie to the desolate beaches of Dungeness in Kent, and into the sinister underbelly of the city's art world.
In Messenger of Truth, Maisie once again uncovers the perilous legacy of the Great War in a society struggling to recollect itself. But to solve the mystery of Nick's death, Maisie will have to keep her head as the forces behind the artist's fall come out of the shadows to silence her.

Thank you for your kind words on my ornament finish on my last post. :) I hope that you have a wonderful weekend! 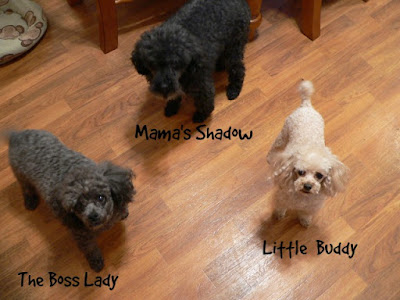 Look at those cute little puff of fur looking up at you! Love your new start....

Vickie: Look at those little sweethearts they are so cute.
I like the new start, the colors are beautiful.

Hi Vicky, Hadn't visit your blog for a while and read your latest posts. First of all I love, really love the Christmas ornament you made for Brain. Especially your finish with the tea bag, so original. Did I say I love it? Unfortunately I missed the JCS Christmas ornaments issue this year, I was to late to order it. Normally I have it every year but this year it was sold out at the embroidery shops.
I love the little ornaments for your typecase too. Is this project finished now? I secretly also dream of little ornaments I can change every month. Maybe I make them one day.
What an impressive new project you're starting this year. I looked it up and it's a beautiful pattern. I am very curious what kind of fabric you've choosen. I hope for you it'll arrive soon. And Brain and you are married for 25 years this year! I love the colors for the embroidery you're working wit. Love and greets, Nienke

Good morning, Vickie! I can imagine you stalking the mailman...peeking out the window, ready to pounce the moment your package is delivered. LOL Of course, maybe that's just what I would doing...LOL

Your stitching is so pretty. And neat. I don't think I would dare take a picture that close. I am sometimes "less careful" than I should be. LOL

Have a wonderful day!

Hi Vickie,
What a pretty start on your sampler! Love the colors so far! What a special sampler this will be!
I hope you have a cozy weekend enjoying some stitching time. That is my plan...winks.
How are you feeling?
Sending hugs your way my friend ❤


Great start , and I could hug all your babies so cute.

Nice start Vickie. Love the pic of your furbabies.

I love the Emma Congdon's piece already! The colours and the font are perfect.
Love the three musketeers at the bottom of the post too!

What a sweet pic of your puppies! I know they bring you so much joy. :)
Looking forward to seeing more of the Emma Congdon design while waiting for your linen.

Oh look at the little woofers!! So cute!!! Reminds me of MY granddogs!! Your new start is looking great! I put the Maisie Dobbs books on my list, to 'read' eventually. I like to start with Book #1 if it is a series, and that one is not available right now. So I am reading a Debbie Macomber book (not in a set) called "Angels at the Table' which is fun! You might like it!! Hugs!

That's a sweet picture of your three babies. : ) And you've made a nice start on your anniversary piece - pretty!

I love the colour combination on your new start and the adorable photo:)
Hope you have a good weekend,Vickie.

Love the pic of the pups -- so adorable! Lovely WIP too!

Your pup trio are adorable. Nice start, Vickie! I hope you have a wonderful weekend.

Lovely warm colours in this design. Your three little friends are so cute, Brandy says hello.

Lovely new start. Love, love the photo with your poodles.

A great start, Vickie. I love all the red colours you use for it. And such a sweet picture of your poodles.