I gave Miss Mabel a haircut last week. On the first day, I clip just her face, neck and feet. Then I brush her out, bathe her, and blow dry her. POOF! 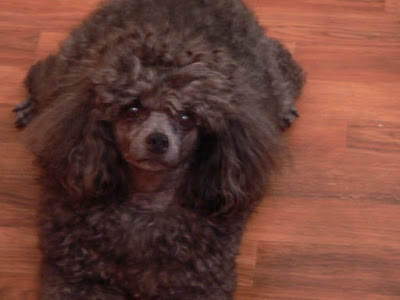 The next day I clip off all the rest! 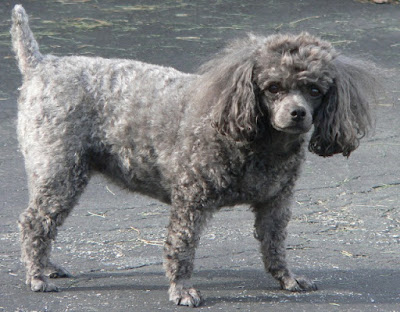 EDIT: I said I would have a chart to give away today. I am sorry I forgot. Since many friends have read this post already, I will give one away next time. So far I have 5 charts to give away. :)

I finished reading Crowned and Dangerous by Rhys Bowen. Another good read!

Nothing is simple when you’re thirty-fifth in line for the British crown, least of all marriage. But with love on their side, and plans to elope, Lady Georgiana Rannoch and her beau Darcy O’Mara hope to bypass a few royal rules...

With Darcy driving me out of London in a borrowed motor car, I soon discover that he isn’t planning to introduce me to the pleasures of sinning in secret—as I had hoped—but to make me his wife!

Of course, there are some quibbles to be dealt with, such as my needing special permission from the King to marry a Roman Catholic and the question of where we might live after the honeymoon. Though he will inherit a title, Darcy is as broke as I am. Even his family’s Irish castle has been sold to a rich American who now employes Darcy’s father as a hired hand.

Throwing these cares to the wind, nothing could deter us from our mission—except perhaps the news that my future father-in-law has just been arrested. It seems the rich American was murdered and Darcy’s father had more than enough motive to do the deed. With the elopement postponed, we head for Ireland where he insists he’s innocent, and it’s up to us to prove it—for better or worse.

I am stitching! A sweet LHN pattern. I am close to a finish. I will share that with you next time. I have made it smaller so I can have it on display at all times in my cubby shelf. I am stitching it one over one on 36ct linen. It is taking a little longer. ;)

I hope YOU have a STITCHTASTIC week my friends! I am so very glad you stopped by today.

Oh my, stitching over one on 36 ct fabric - no wonder that it takes a little bit longer. I'm curious to see the result. I have been stitching on my Solo September piece and it's still fun.
Nice pictures of Henry and Mabel.

Looking forward to seeing your stitching progress. Mabel looks so super fluffy in that pic.

Mabel has quite a bit of fluff!

Love seeing your sweet dogs when they get their haircuts! So cute! Stitching over one is never fun for me -- especially on 36ct fabric! It's going to be beautiful! (Love how it looks, hate stitching it. lol!)

Mabel looks beautiful, and I know Henry will be just as handsome soon! You're much braver than I; I'm not sure how Woody would react if I tried to do his grooming. :o)
Hope you have a pain-free week; we're supposed to have hot weather and not get down to seasonal temps for another week. Yuck.

Mabel looks just lovely Vickie! I admire you so much for being able to do that on your own! And now it is Henry's turn :) How often do you bathe them?

I am anxious to see what you are stitching...over one on 36 count...wow! I don't mind doing over one but 36 count would certainly be a challenge for me! I think 32 count is as low as I have gone :)

Your book sounds good! I just finished The Lavender Garden by Lucinda Riley and lived it! I have read one of her books and loved that too so maybe I will try a 3rd....grins!

Mabel and Henry are such cuties. Give them a scratch behind the ears from me. I look forward to seeing your latest cubby project. Enjoy your day and week, Vickie!

I'm so impressed that you can stitch on such a small count fabric. I'm to the point where I need three lights and a magnifier to stitch! hahaha Well, maybe not quite that bad, but I can see it coming...

Hi Vickie: I am so happy you are stitching, I love to read, I am a mystery reader and bury myself in a book. The book you just finished sounds very interesting I have put it in my list of books to look for after I finish my pile that I have now, I tend to buy too many at once at the half price book stores that take in exchanges yahoo a money saver.
Miss Mabel looks fabulous, she is looking so sweet posing for the camera.

What a pretty Mabel:)

Mabel is looking lovely. It's nice that you can groom them yourself. looking forward to seeing your stitching.

Mabel looks so pretty in her new "doo".

Oh good grief. Over one is scary enough but on 36? NO!!! It can't be easy to trim the pups all over.

Sure knows how to pose in front of the camera, so cute!


So cute , I know how much time it takes to make your little one so cute , you did a great job .

Mabel is looking lovely. It's nice that you can groom them yourself. Looking forward to seeing more updates. Happy Stitching! C's Cross Stitch Creations~

The pups always look so nice after getting groomed, don't they? Wonder if they feel good too? Glad you are stitching, but it sounds hard! The owner at my LNS, who does over one on high count, says she does a half cross stitch on 36 or 40 and it looks great! I have admired her finishes for ages! And I look forward to seeing yours! Hugs!

Mabel is lookin' good, Vickie!! And I can't wait to see your teeny-tiny over one piece :)

I don't know how you manage to clip your lovely poodles Vickie. Brandy has never liked being clipped and now that he is approaching sixteen he likes it even less. Stitching over one is hard going, I love the end result though.

Mabel is looking especially pretty! I'll look forward to seeing your little over one piece. : )

They are both so sweet, Vickie! Good job on grooming her.

Good to hear your review, I've enjoyed a few of those Royal tales. Good luck with your stitching!

I admire your grooming skills!!

Mitzi does not like us grooming her... so we get someone in to do the clip! Amazing how good she is for the groomer! :o)
Hugs xx

Your poodles are so cute!! I would love to see your LHN pattern! I love their designs xx

Such a beautiful girl! Love seeing pictures of your poodle babies. :)