Hi friends! We had cooler weather at the end of last week and I had almost next to nothing for headaches!! Yay me!! Felt so good. This beta blocker does work, as long as the temperatures are 75º or below. Unfortunately that is no longer happening around here. Back to hot. :(

I finished the September pattern in the Joyful World SAL by Snowflower Diaries. 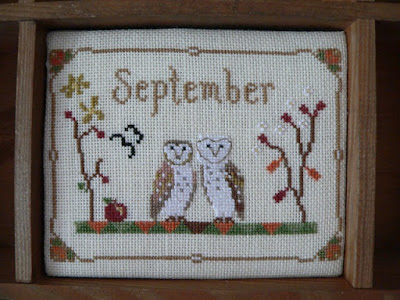 I stitched this one over one on cream 25ct linen. I did stitch two over one with B2500, to make it show up nicely. I used DMC and also VMSS 1795 Halloween Orange. I did make a change with the backstitching of the owls. I did not use black, I used 840 instead and am very happy with it! 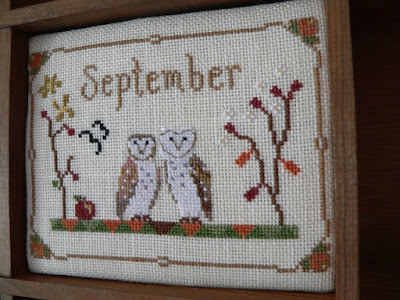 I finished reading The Wish by Beverly Lewis. I really enjoyed this one. Now I enjoy every single one of her books, but this one just gave me a warm, fuzzy, happy feeling.

Leona Speicher got the "sister" she'd always dreamed of the day Gloria Gingerich and her family moved to Lancaster County Amish farmland. The Arkansas newcomers seem to be everything a devout Plain family should be, and Leona can't help comparing Gloria's engaging young parents to her own.

Leona's cousin shows a romantic interest in Gloria around the same time as Gloria's older brother expresses his fondness for Leona--it seems likely the two young women will marry into each other's families, remaining close friends for life. Thus, Leona is shocked when the Gingeriches suddenly pack up and disappear after being expelled from the church for reasons no one will discuss. Despite Leona's pleas, Gloria goes with them, leaving more than one broken heart behind.

When Gloria unexpectedly contacts Leona after a silence of several years, Leona makes up her mind to persuade her friend to return to Lancaster County and the Amish ways. Leona's fiancé, the deacon's son, is alarmed when Leona decides to go after Gloria. Will Leona's dearest wish lead to her own undoing?

Now I am going to stitch the September pattern from our friend Palko.

I am so glad you stopped in with me today my friends. I hope you have a great week! 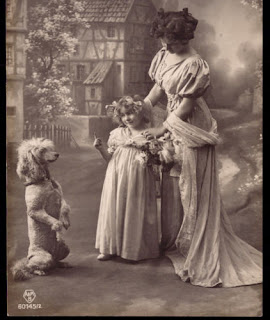 Vickie, I am glad you had a bit of relief from your headache due to the cooler temperatures. Your September SAL finish is cute.

The Owls are looking good. I'm working on mine slowly but surely.

And yea for some temporary relief!

Congrats on another cute finish Vickie. Glad the headaches eased up for a little bit.

Glad to hear that the headaches receded for a brief respite, at least! I really love those owls.... very cute! And I like Beverly Lewis' books too! Hugs!

Your owls are just too darn cute. I had great plans to start the SAL, but somehow, my life is faster than my fingers. LOL

Glad to hear there's been some respite from the headaches. We've been in the 70's all last week, then shot up to 95 today. Yuk.

Have a good week, Vickie...

Vickie: I am so happy to hear your headache's are lessened, I am still including you in my daily prayers.
Love the Owls oh so cute.
I am a reader, I have right now 15 books to get through, I like when you post about your readings.

Another cute finish - well done! And 'hooray' for a break in the headaches. I hope that cooler fall temps, when they arrive, will give you a respite.

A cute stitch Vickie , looks so cute.
The weather will be cooler soon , Autumn is already here the trees are changing colour !
Have a good week hugs.

A sweet September finish, those owls are lovely together :)

Lovely finish. The owls are very cute.
Have a nice week.

Those owls are so cute, i'm so pleased to read you were able to have some headache free moments. xx

Glad to hear you're feeling better👍 Those owls are so cute, awesome finish!

Great to hear you got a bit of break from the headaches. I hope they stay away even with the weather getting hot again. Love your Owls finish, so cute!

Hi Vickie....Your little owls for September are just adorable! Love them. I am glad you had some relief from your headaches and hopefully cooler temps will be there soon...sighs. Still praying! I love all of Beverly Lewis books as well. This sounds like another good one...I will have to look this up at the library:) I hope you are having a good day so far! Sending hugs your way!

Great owls. I would love to see a barn owl someday.

I'm so glad you had at least a few headache free days, Vickie! I'm sure days like that help you get through the bad days. Cooler weather will be here soon, I'm sure.

Love the teeniness of your owls :) It's been fun to watch the whole series being stitched over one by you!

Love your September stitch. Oh so glad you had a reprieve from the headaches. Soon the cooler weather will be there for you and hopefully the headaches will be over.

Glad to hear you had a reprieve on the pain. It's been so chilly here and today, HOT! Hate to see summer leave but you and everyone else on earth already knows that.

What a pretty design. I love owls!

Dear Vickie,
what are the owls again sweet, a beautiful stick figure and a fantastic job. I am particularly pleased that your headache away were therefore I wish to they like you cooler days stay away.
I embrace you my friend on the other side of the ocean
Your Sandra

So glad you are getting some relief from headaches at last, i take beta blockers for migraine and touch wood they do seem to do the trick.

I love your September finish, and i think you made a good choice with the back stitch colour for the owls :-)

Have a good rest of the week x

Lovely stitching! Glad to hear your headaches are better :D

Next to nothing for headaches? Yippppiiiiiii! I am so glad to read this, my dear friend.

Your September stitching is so sweet. I love the changes you made - it looks so soft!

Have a wonderful rest of the week (with temperatures under 75 °)

Good to hear that you got some relief from the headaches!. Beautiful stitching! Happy Stitching! ~ C's Cross Stitch Creations http://christiescrossstitchcreations.blogspot.com/

I love those owls!! They are fantastic! So nice that you had some cooler temps so no headaches. it's too bad the heat brings them on again. :( When are you getting your botox treatments? I hope insurance has come through?

I love owls! The September design is lovely, pretty stitching!

Great work on the September design, I like the changes you made to the owls too.
Glad the cooler weather helped your headaches, hopefully there will be some lower temperatures on the way soon!

Praises for the relief you had from the heat and headaches! May the temps come down again real soon. Nice work on September!

I love the September design. My favorite month :D

Oh Vickie, these owls are so so cute. Your first finish for the monthly shelf.
I hope that the weather will get cooler again very soon at your place so that the headaches will vanish again.

Your owls are so beautiful, this finish is great!
Mmmm, I hope cooler temps will be there again soon ...
I love the books over B. Lewis, The Guardian is lying here to be read (library). I haven't read the one you told us about either. That will come ;)

Have a good day, my friend. May the weather be gentle for you ...

P.S. André will have to be operated, he has a double groin rupture (I hope this is correct English but I'm not sure, grins). The other 'pain things' will have to wait, first an operation.

I am happy to read you are experiencing a little break with the headaches and good luck with the trials of getting that botox treatment. Your owls are adorable; what sweet designs are in this SAL.

How fantastic your headaches have taken a sub 75 degree sabbatical. :-) Autumnal weather here we come!