I have an update picture to share with you of my sampler. You can click on the on the picture to make it bigger. 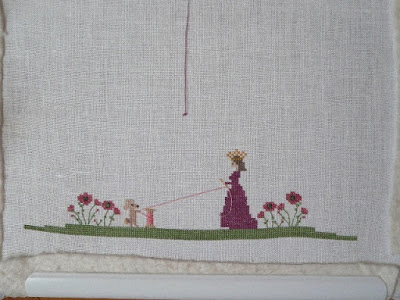 I am now working on words I am putting above. I am over half done with that.

Can I promote The Cat Who books enough? I think NOT! 😻

Jim Qwilleran lives in Pickax, a small town 400 miles north of everywhere, and writes for a small newspaper. He stands tall and straight. He dates a librarian. His roommates are two abandoned cats that he adopted along the way, one of them quite remarkable. Qwilleran has a secret that he shares with no one—or hardly anyone. His male cat, Koko, has an uncanny intuition that can tell right from wrong and frequently sniffs out the evildoer... Retiring in Pickax, actress Thelma Thackeray has decided to start a film club and organize a fundraiser revue, starring Koko the cat. But Thelma's celebrated arrival takes an unpleasant turn when the strange circumstances of her twin brother's recent death seem suspicious to Jim Qwilleran. Qwill needs a helping paw in this case. But will Koko deign to take time from his stage debut?

What could be more purrfect for fans of the Cat Who series than an intimate look at the private lives of those extraordinary Siamese cats Koko and Yum Yum—the most unlikely, most unusual, most delightful team in detective fiction!
In this charming collection of feline antics, you’ll discover why Jim Qwilleran considers Koko a veritable clone of T.S. Eliot’s Rum Tum Tugger, how Yum Yum was rescued from a burglar who is not above a spot of catnapping, and many more fascinating catly facts...

My stepdad Jim is doing fairly well with his chemo and radiation thank you for your prayers. Our friend Julie needs us to pray for her also. She has uterine cancer. She has a tentative date of October 9th for surgery. 💗

I am so thankful you stopped by today my friends. I thanked God for you today! God bless you!

Do all things without complaining and disputing, that you may become blameless and harmless, children of God without fault in the midst of a crooked and perverse generation, among whom you shine as lights in the world Philippians 2:14-15 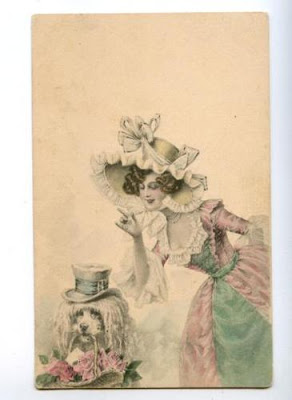 Wow Vickie, I'm excited, it looks gorgeous. You have talent and I'm curious what's coming. A great start. How nice that your stepfather feels better, and I like to pray for Julie.
Hugs Martina

Hello Vickie,
A great Start on your new project. I like it very much. I'm looking forward to the next photos.
Have a nice weekend my friend.
Hugs, Manuela

You r Sampler is looking great.
Have a great weekend!
Marilyn

Vickie, your sampler is precious! Love the little poodle and spool of thread. Darling. Glad to hear your stepdad is doing well. That can be so hard. Prayers for strength and healing for your friend.

Your sampler is growing nicely, Vickie! Do you have it all charted out or are you designing bit by bit? Hope you get some time to work on it this weekend :)

Your sampler is so wonderful! I can't wait to see the next part!

Thank you for sharing about my health issues and for your prayers. So thankful, my friend.

Your cross stitching is so adorable. You are so talented. I send continued prayers for Mr. Jim and I will also add Julie to my prayer list as well. Wishing you a lovely day sweet friend. :)

That is such a pretty design Vickie.

Your sampler is really looking good. Glad to hear Jim is doing fairly well. I will add prayers for Julie. I need to look up those cat books!!

Vickie: I am happy Jim is doing well, I have your friend on my prayer list.
Your design is adorable, I love it.

I'm heading over to Amazon to check out those books Vickie - as you know I do love my cats:-)

Such a lovely project Vickie, looking forward to see more!

Vickie, your sampler is looking good. I am playing catch up, but will definitely add Julie to my prayer list. I am glad to hear that your Stepdad is doing well and will continue to pray for him.

The sampler is looking lovely. Of course, there is a little poodle in there!