Hi friends! I finally finished the Margaret Sherry cat for my mom. 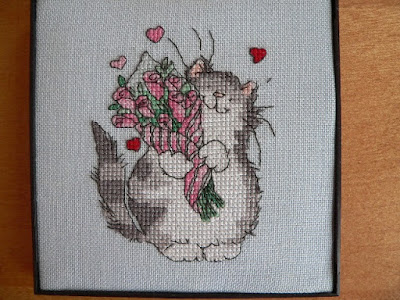 This pattern was sent to me by Montse (no blog). Thank you my friend!😊I did change a few markings on the cat to make it look more like my mom's cat "Tootsie". This is what the pattern did look like. 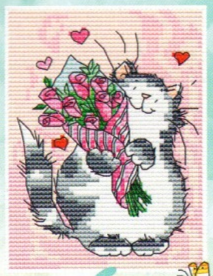 You may notice I also did NOT stitch in the whole background. Yes, it was PINK, and SHOCKING!, I did not go with pink. My mom's favorite color is blue, so I stitched this whole piece two over two with the called for DMC onto 28ct Monet Blue linen. (much easier!) 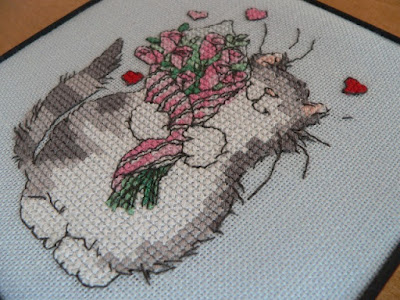 I found the 5x5 black frame at Michael's. 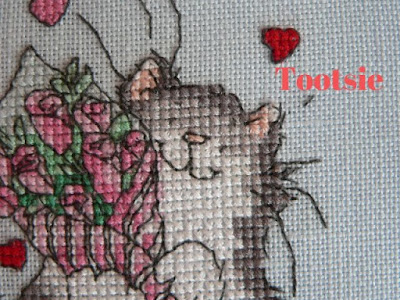 I will be giving this gift to my mom on Sunday when we go over for Mother's Day. It also happens to be her actual birthday.

I do have other Margaret Sherry patterns lovingly mailed to me by other friends. I WILL stitch those up for my mom. Not this year though.😉

I am now stitching up the June wreath for the cubby shelf.

Our friend Vicki stitched up the May poodles from my Calendar Poodle SAL page. 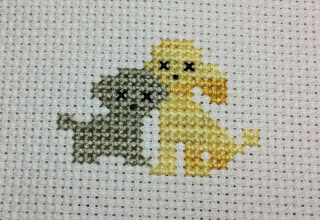 Here is her whole poodle gang to date! 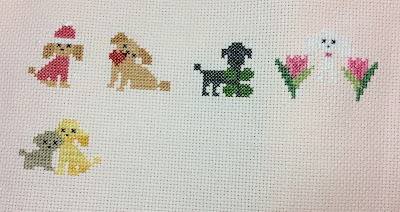 Love them! They are on PINK LINEN!! tee hee!

Okay friends, I read To Die But Once by Jacqueline Winspear. That's a Maisie Dobbs book, so you KNOW I am going to say I like it, right? RIGHT! I did. I thought it was great. If you have never read the Maisie Dobbs series, why not?! You should!

Maisie Dobbs—one of the most complex and admirable characters in contemporary fiction (Richmond Times Dispatch)—faces danger and intrigue on the home front during World War II.
During the months following Britain’s declaration of war on Germany, Maisie Dobbs investigates the disappearance of a young apprentice working on a hush-hush government contract. As news of the plight of thousands of soldiers stranded on the beaches of France is gradually revealed to the general public, and the threat of invasion rises, another young man beloved by Maisie makes a terrible decision that will change his life forever.
Maisie’s investigation leads her from the countryside of rural Hampshire to the web of wartime opportunism exploited by one of the London underworld’s most powerful men, in a case that serves as a reminder of the inextricable link between money and war. Yet when a final confrontation approaches, she must acknowledge the potential cost to her future—and the risk of destroying a dream she wants very much to become reality.

I did see the orthopedic doctor one week ago. He gave me a cortisone shot in my shoulder. It has made my shoulder a little less painful now. I continue on with physical therapy twice a week. I do my exercises at home daily. My frozen shoulder IS making progress. This is a slow thing. I will return to the orthopedic doctor in one month. If he feels I am not making good enough progress, he will do a manipulation then under sedation.

To all of you mom's out there, I wish you a Blessed Mother's Day!

I want to thank you for taking the time to leave me a comment my friends. You brighten my days with your sweet words. Thank you!

Have a beautiful weekend friends! 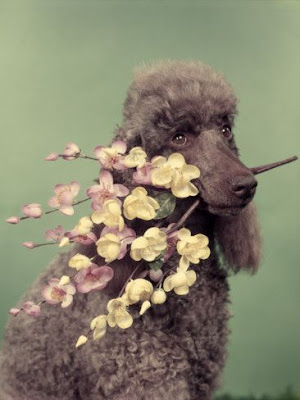 
Vickie what a lovely cat design for your mother , I have a few charts to send you soon too.
You made a fab job.
Enjoy your day .

Oh, what a beautiful cat, I love it!!

Oh, what a very cute cat. I think your mom will love it.
Have a nice Weekend and Motherday.
Best wishes Manuela

Tootsie is so cute...I' sure your Mom will love it!

Your Mom will treasure this gift so adorable! Glad to hear the shoulder is coming along...I speak from experience too it is a long process but oh so worth it! I feel for you😏 many blessings for continuing strength and a hug from MN🌷poodle designs are so cute 🐾

Your mom is going to absolutely love her gift! I think it is so adorable .... and all that detail in the design just adds so much charm! So precious my friend!

I am happy to know that you are making some progress with your shoulder....I know it takes time and you are being so faithful! I am praying!

I hope you have a wonderful Mother’s Day my friend! Enjoy your day!

Super cute Vickie. Your mom will love it. Margaret she has great designs. Have a great weekend.🌻.

Hi Vickie,
Oh she is so cute, but it was worth working with the BS. And it will be a great gift for your mother.
The poodle gang looks so beautiful, i love them.
Big Hugs, Martina

Glad you got Tootsie finished! I like your changes and I like it on the blue fabric. Happy to hear that the cortisone shot helped a bit. Enjoy your weekend, Vickie and I hope you are spoiled on Sunday as well.

Aw, Tootsie is so cute! Your mom will love her!

Tootsie is awesome. So love Margaret Sherry's designs and you made this one even nicer by how you stitched him up. I hope you and your Mother have a most wonderful Mother's Day sweet friend. :)

Thanks for putting my stitching up, too. I am so looking forward to June's poodle(s).

Congrats on the cute finish Vickie.

My goodness Tootsie is precious. Your mom will love it. Sorry the shoulder is still an issue but it does take time. Hang in there.

Adorable finish. And over two!

I bet your mom will love her own kitty stitched up by you. I've been away from reading blogs for such a long time. Work projects are keeping me wrapped up with NO spare time and not much time for stitching/knitting either. Hope your shoulder progresses and you don't have to have the manual manipulation - that sounds drastic.
Enjoy Mothers Day !
Mel

Now, I am not a Margaret Sherry fan but I do love your finish for your mum. Very sweet. Thanks, as always, for the book review and Happy Mother's Day to you and your mum. hugs, kaye xxxx

I do love your gift to your mother, how cute! A fantastic finish, Vickie!

Your friend stitching is so pretty! The poodle with the tulips is my favourite!

What a sweet finish, Vickie, and a wonderful Mother's Day gift for your mom! I'm glad to hear your shoulder is improving and happy that the cortisone shot helped with the pain. Wishing you a Happy Mother's Day! : )

I love the Margaret Sherry cats, and your one is gorgeous! Beautifully stitched, well done! Your mum will be delighted!
Thank you for the book review, sounds great! I’ve checked it out and our library have a copy so I will be off to see if it’s on the shelf next week! Always looking for a good book!
I’m glad to hear your shoulder is improving.
Hugs,
Barbara xx

Your mum's gift is just lovely Vickie, she will adore it. The photo you finished with of the poodle with flowers just made me smile. Have a great Mother's Day.

Wooooo, you survived the MS backstitching adventure! I see Tootsie has white socks, front and back. :D

It's good to hear your shoulder is improving though not as fast as one would like! Hopefully it will not come to the manual yanking...!

What a wonderful present for your mom! So cute! I love Vicki's collection of your poodle designs. So adorable! They look great all together like that!

What an adorable pussy cat stitch!

What a beautiful stitched gift for you Mom! The kitty is adorable! I love her patterns and think their faces are so precious.

I'm so glad you got some relief from the shot. I am praying for your shoulder to loosen up and be pain free!

I hope your Mother's Day was wonderful.

Hope you had a wonderful Mother's Day

Absolutely adorable! I'm sure she loved it especially after changing it to look like her Tootsie! I still have a couple MS cats I need to finish.
Awe, Vicki's gang looks great!
So glad you're feeling a bit better, I hope your progress continues.

Your MS is adorable, I bet your mom was thrilled or what?! So cute ...
I am happy to read there is some improvement with your shoulder.

I have a colleague with the same problem and yes it takes a LOOOOONG time to recover. Courage and strength, that's what I'm wishing you. Take care, my friend & have a good day!

I like your version much better on the pale blue fabric, Vickie! I'm sure your mom will love it. My mom loves anything that I make her and has everything displayed that I've stitched her through the years :)

Hope your shoulder is unfreezing more each day--that is great that you are making some progress! Enjoy your weekend!

The MS kitty is wonderful and only needed minor adjustments to be perfect. I never stitch the background on those, that's what coloured fabric is for!
Love the poodle collection too.

I love Tootsie, what a sweet little cat. An a wonderful gift for your mom. She must have been thrilled.