Hi friends! A totally new look here on the blog. I did not know the background disappeared. It went black on me. That will not do. So not me!😉Right? How do you like the new look? My friend Varla gave me this background and I love it! Thank you Varla!

It has heated up here.And so far my headaches are leaving me alone. Then again, I am NOT hanging out in the sun either, but I used to not be able to even be in the sun at all, so this is a huge improvement since the neurologist increased the Topomax. I no longer have daily migraines. Hip hip hooray! Monthly migraines with my menstruals, yes I do have those.

I have news! Fantastic news my friends. Jacob, our oldest is a nurse now!! Yes, he has graduated from Marquette University.👨‍🎓 Woo hoo!🎉 AND once he passes the State Exam, he has been hired and will be working at Children's Hospital of Wisconsin. This has been his goal the entire time he has been in university. To be a pediatric nurse.👨‍⚕️ We are very proud of him.

I have a finish to share with you. My June wreath. I will be making it up into a flatfold for the cubby shelf. I just did not get it done in time for picture taking for this post. 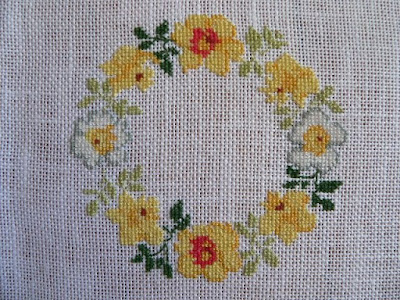 I have to admit that I am not wild about this wreath. The designer says these are strawberry flowers. I was so hoping for roses for June, my birth month. Oh well. I really, really like the July wreath!

This pattern is available for purchase HERE.

I designed a June Poodle and stitched her up. All I am saying is, this one is my favorite so far. You'll see.🐩

I am stitching up a fun freebie for Madeleine right now. Wait til you see it! It has one of her favorite animals, and no it is not poodles.

Oh yes, the orthopedic doctor decided it is too early to do a manipulation if he does one. I must keep plugging away at the physical therapy. sigh. This takes soooooooo long.

I thank you so much for taking the time to comment on my blog my friends. Have a wonderful weekend everyone! 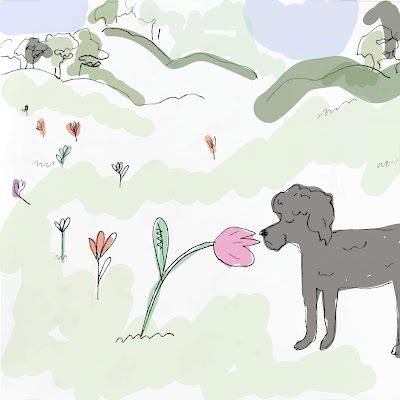 Isn't this wonderful?! This was done by Madeleine. She had to do a four page book for her university class. She made a Seasons Book With Murphy.😊 So I am sharing Spring with you here. Soon you will see Summer.

Hi Vickie,
I see you have given your blog a new picture, I like it very much.
I am glad that you have your migraines under control, and it is good to have them under control. Congratulations to your son, how nice that he got a job immediately.
I really like the new Wreath, wonderful colors.
Wow, Madeleine really has talent, the picture looks fantastic.
Big Hugs, Martina

I like your new outfit. Lovely little cross stitch roses.
Congratulation to your son.
Your new wreath looks wonderful. I love it.
Have a nice weekend, my friend.
Hugs, Manuela

Such a lovely June wreath.
Nice back ground .
Great news about your son you must be so pleased , tell him congratulations.
Enjoy your weekend.

So glad you are getting some relief from migraines, i know how debilitating they can be.
Great news about your son, congratulations to you all.

Love the picture Madeline did for uni, she is very talented.
Have a good weekend.

Glad your headaches have subsided.
Congrats to Jacob for all of his hard work and fulfilling his dream!
Have a great weekend!
Marilyn

So glad to hear you are better! Finally some improvement.

Congratulations to Jacob. Pediatric nursing must be heartbreaking at times but so rewarding. Best wishes to him. And Madeleine!

Congrats to you and your son; he must have a kind heart. I love your new background..very appropriate!

Vickie, I am so glad that the migraines have disappeared. I wish all the best for you! Congrats to Jacob! The difference he will make in a lot of little lives! I do like the June wreath.
Cathy

Congratulations to Jacob on reaching his goal! Best wishes to him as he takes the state exam. Your new background looks fabulous and so you, Vickie. The June wreath is lovely. I love the spring page that your daughter created. Enjoy your weekend!

Congratulations to Jacob! May he have a long and fulfilling career. A good nurse can make all the difference in a hospital experience. I still remember a nurse named Nicole who took care of my dad when he had complications following a surgery many years ago. She was a bright spot in a difficult time.

I thought I had gone to a different blog when I didn't see your pink background....do like it though. I'm also very happy that the migrains are leaving you somewhat alone. That is super good news.
Blessings

How exciting for Jacob--I'm so glad he is in a career that helps others. I truly think those are the most rewarding. They may not always be the best paid, but he will have so many memories and stories and a feeling of satisfaction at the end of each day. I wish him all the best :)

Fun new brackground and pretty wreath, Vickie... And I love Madeleine's Spring drawing! So glad your headaches seem to be abating--you must feel positively giddy :) Hope you enjoy your Memorial Day!

Pretty background. Congratulations to your son. The wreath is pretty.🌻

Congrats to your son Vickie. That is great news. Love your little finish.

Love the new look! Congratulations to Jacob - that's so exciting! Love Madeleine's drawing too -- so great! I like the wreath you finished -- to me the flowers look like daffodils. :D I'm glad the migraines are better in general now. That's good news. But sorry to hear about the manipulation. :(

How proud you must be of both of your children. The spring picture is delightful and many congratulations to Jacob and his wonderful future. The world needs more dedicated people like him!! I do love both your new background and the pretty wreath. Well I have read that book, we share another inspiring story!! Have you read From Sand and Ash? I am having trouble with it but will keep going for a bit more. I don't like the male main character so far.

Great news about Jacob.I am sure he will make a difference to the lives of the children for whom he cares.I think Madeline's drawing is delightful and Murphy is a great subject to add to her drawing:)
I really like your new background Vickie.

Uhhhh those are totally daffodils what no, not strawberries?! Or perhaps I'm just wishing them everywhere. :b It looks lovely stitched whatever they be!

Hooray for Jacob and Madeleine! It's cute she's using Mr Grumpy for a cute seasons book.

Congratulations to Jacob! That IS very exciting news indeed! A pediatric nurse....what a wonderfully rewarding job and one that is so badly needed! As you know I have come in contact with many nurses over the last three years and these people are to me angels without wings. They touch hearts every day!

Your wreath is lovely as well! What a wonderful collection you are building for your cubby shelf! Have I ever told you how much I love your cubby.....grins!

I hope you have a good weekend my dear friend! Sending hugs and love your way!

Love the new background. Congrats to Jacob. What a wonderful accomplishment. Such a blessing he will be to all those little ones. Madeleine's book page is sweet. I can't wait to see the others. Of course, I am on pins and needles awaiting June's poodle, too. So thankful your migraines are no longer daily. Praise God. :) Wishing you a most lovely day sweet friend. ((hugs))

So glad to read that your migraines have diminished in frequency significantly! That's the best news. It's hot here too and I do not like the hot weather at all.

My son Chris is a RN too. He works in the OR with a focus on orthopedics. He loves it and love the 4 day work week! It's been a good career for him, I can't picture him sitting in a cubicle working day after day. He's never been one to "sit" well. Good luck to your Jacob as he begins his career!

Wonderful news on the health front Vickie - so very glad you are without pain most days.

Your new background is terrific! I'm glad your headaches have subsided some, that is very good news. Congrats to your son! I'm so proud of him for pursuing and achieving his goals.

Congratulations to Jacob!!! And Madeleine is quite an artist! Very, very glad to hear your daily migraines are gone! Love your June wreath and your pretty new blog background! : )

That's wonderful news about your son Vickie, it sounds like he's found the perfect job - I hope he loves it.

Congratulations to Jacob! What a wonderful achievement! I love Madelyn's picture, too! So cute! Can't wait to see the others.

Keep hanging in there with the PT. I know how hard it can be plus just going can get really old. Praying for your complete healing!

Your stitching is beautiful, as always!

I love your new blog outfit, very cool. And the little June wreath is just darling.
An so cool to read that your daily migraines are gone for good. That must be a real new life for you.
Congratulations to Jacob on his graduation. He already has achieved so much.

Your blog looks great, Vickie! I really like the new look!
Congratulations to Jacob!
So happy about the daily migraines!
Your June wreath is lovely!

Congratulations to Jacob! Well done.
The white flowers look like strawberry flowers but not the yellow. It's pretty anyway.

I did notice your blog change, I like it!
I'm so glad to hear your migraines are gone, hopefully your monthly ones will stop soon too.
Congratulations to Jacob! How wonderful that he has obtained his goal and will be working where he wants.
The June wreath is still nice, despite not having our roses!

Congratulations to your son. I know you are so proud of him. Judy 🙂