Two Down, One To Go!

Hi friends! I have the stitching done for Emerson's Christmas ornament. His is two sided also. His ornament frame is a gift from our friend Nienke as well. :) 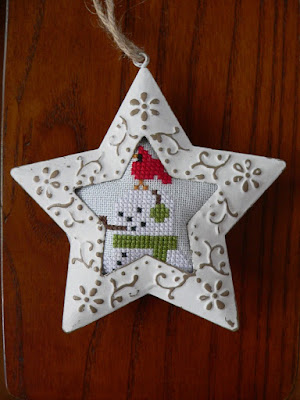 Now isn't he a cutie?! This pattern is called 'Let It Snow' by Plum Pudding NeedleArt. You can find this pattern in the JCS 2013 Christmas Ornaments Issue. I stitched it on a mystery piece of pale blue 28ct linen, two over two with DMC.

And I thought getting the stitched linen to sit perfectly within the metal heart frame for Madeleine's ornament was fun! The star was even more challenging. I used iron-on interfacing for all four pieces, and I am very glad I did!! 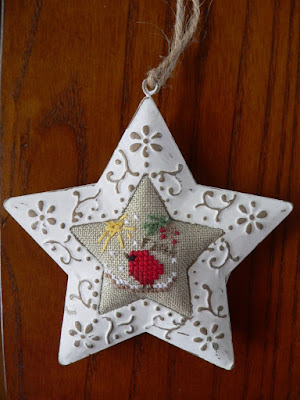 Remember this little guy I showed you? Just precious. This pattern is called 'Baby Cardinal' by The Victoria Sampler. This pattern is found in the exact same magazine as mentioned above(2013). I stitched this on 28ct light mocha linen, two over two with DMC and VMSS Valentine Red.

Well I finally finished Fates and Traitors by Jennifer Chiaverini. You may recall this is the author Brian and I saw at our public library last month. She read a bit from this very book and spoke about it. I began reading this book, got about 25% done, then the audio version came from the library, so I switched to listening to it while I stitched.

This is an excellent book. I don't know if I would say I enjoyed it. Strange right? Well, it is about the life of John Wilkes Booth. Now WHO likes him?! That is what made it strange. This is an historical fiction book. So it was very interesting to learn many things I never knew about his life. However, since the man murdered Abraham Lincoln, you just don't like him, plain and simple.

The New York Times bestselling author of Mrs. Lincoln’s Dressmaker returns with a riveting work of historical fiction following the notorious John Wilkes Booth and the four women who kept his perilous confidence.

John Wilkes Booth, the mercurial son of an acclaimed British stage actor and a Covent Garden flower girl, committed one of the most notorious acts in American history—the assassination of President Abraham Lincoln.

The subject of more than a century of scholarship, speculation, and even obsession, Booth is often portrayed as a shadowy figure, a violent loner whose single murderous act made him the most hated man in America. Lost to history until now is the story of the four women whom he loved and who loved him in return: Mary Ann, the steadfast matriarch of the Booth family; Asia, his loyal sister and confidante; Lucy Lambert Hale, the senator’s daughter who adored Booth yet tragically misunderstood the intensity of his wrath; and Mary Surratt, the Confederate widow entrusted with the secrets of his vengeful plot.

Fates and Traitors brings to life pivotal actors—some willing, others unwitting—who made an indelible mark on the history of our nation. Chiaverini portrays not just a soul in turmoil but a country at the precipice of immense change.

I am working on an October piece! I should have done this one up before the Christmas ornaments. I usually am so very orderly in my work, but, well, not this time. ;) I will share this finish with you next time.

Oh yes! I did not have those scope tests done. They are to be done on Wednesday. They scheduled me at a facility that my insurance will not cover. So now that is corrected and I wait a little bit.

Thank you for your kind words of encouragement my friends! I hope you have a stitchtastic weekend!

What a cutie this finish is (melting here ;), congratulations. You're almost there and then Santa can come, right?
Good luck coming Wednesday!!!

Waves across the ocean, Carolien

Another wonderful double-sided ornament, and it's just as cute as the one you made for Madeleine. I just love these metal frames.
I wish you all the best for your tests.

Those ornaments are so pretty, well done. Best of luck with the tests.

This is just as beautiful as Madeleine's heart. Both of these small birds are so cute.
I hope that your tests go well.

Another sweet ornament finish!
Those "cases" you're using for them are just perfect!

Another adorable ornament finish, Vickie! Have a peaceful weekend and continued thoughts and prayers for you!

Love your ornament's finish again. You choose the patterns so well!
How nice you met Jennifer Chavirinni in person. Is she the author of the Elm Creek quilter series? Sounds like a very interesting book she wrote. Love and greets, Nienke

Nicely done! And by now, you have mastered getting the ornaments to sit correctly in the little frames. A fine job! Sorry to hear the tests were postponed, but it is better than having to pay for them cause the insurance doesn't cover them! Yikes! Hugs & Prayers!

Love the ornament - so adorable. Good luck with your upcoming tests.

Your two finishes (this and the previous post) are just the cutest.

Oh, how beautiful stars!!
Have a great weekend!

Another lovely ornament! You are going strong! Insurance is such a bother. Hope all goes well when you finally go for the tests.

With November almost here, I'm going to have to get out my JCS ornament issues and stitch up some ornies like you have! Beautiful projects as always, Vickie!

Both sides of this ornament are adorable, but I can just imagine trying to position them "just so" in order to show the design. Well done!

Both sides from the ornament looks great. I like it.
Have a nice weekend, Manuela

Those ornaments are really cute. The frames go really well with the stitching. I enjoyed your comments about the book, very interesting. I love historical fiction. That one sounds so interesting.

The star ornament is so very pretty, going to go check out Madeleine's now.

Love the star ornament and the love heart one too, very pretty finishes.

I'll think about you on Wednesday Vickie. Take care.

Your ornaments are truly stunning! LOVE them and ingenious way to finish them :)

Absolutely gorgeous! I'm sure your children will love them. It's lovely that you've made something so special for them! :D

What an adorable ornament, you did a great job!