Hi friends! I have finished stitching the "A Year of Celebrations: September" pattern by Hands On Design. This is found in the September 2014 issue of Cross Stitch & Needlework Magazine. 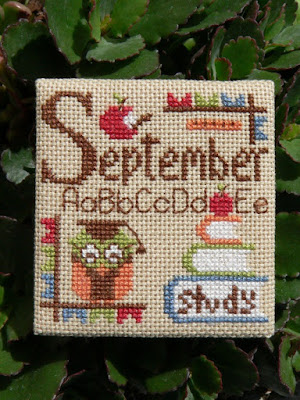 I stitched this on 25ct New Khaki linen one over one with DMC. 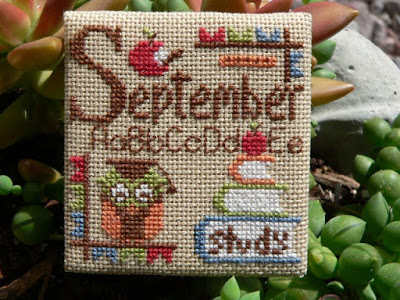 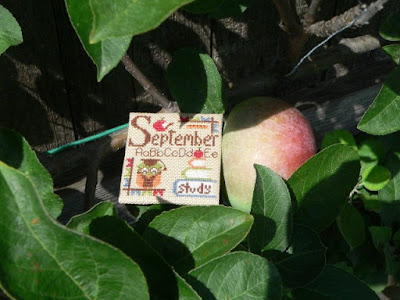 I finished listening to Mrs. Grant and Madame Jule by Jennifer Chiaverini on CD. What an excellent book!
The New York Times bestselling author of Mrs. Lincoln's Dressmaker and Mrs. Lincoln's Rival imagines the inner life of Julia Grant, beloved as a Civil War general’s wife and the First Lady, yet who grappled with a profound and complex relationship with the slave who was her namesake—until she forged a proud identity of her own.

Since childhood, Julia owned as a slave another Julia, known as Jule. Jule guarded her mistress’s closely held twin secrets: She had perilously poor vision but was gifted with prophetic sight. So it was that Jule became Julia’s eyes to the world.

And what a world it was, marked by gathering clouds of war. The Grants vowed never to be separated, but as Ulysses rose through the ranks—becoming general in chief of the Union Army—so did the stakes of their pact. During the war, Julia would travel, often in the company of Jule and the four Grant children, facing unreliable transportation and certain danger to be at her husband’s side.

Yet Julia and Jule saw two different wars. While Julia spoke out for women—Union and Confederate—she continued to hold Jule as a slave behind Union lines. Upon the signing of the Emancipation Proclamation, Jule claimed her freedom and rose to prominence as a businesswoman in her own right, taking the honorary title Madame. The two women’s paths continued to cross throughout the Grants’ White House years in Washington, DC, and later in New York City, the site of Grant’s Tomb.

Mrs. Grant and Madame Jule is the first novel to chronicle this singular relationship, bound by sight and shadow.

Yesterday was our Murphy's 13th birthday!  As his groomer Mary said, "You're a grandpa dog!" :) Miniature poodles have an average life span of 12 to 15 years. We have owned Murphy for 10 months now. 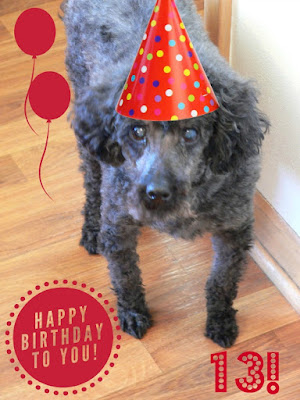 I hope you have an excellent week my friends! Thank you for stopping in with me. I am so glad you did. 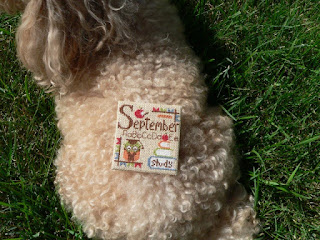 Oh I love the September stitching :-)

I loved stitching this September square a while ago. But I stitched it over two. Yours looks gorgeous over one.

What a lovely September finish!
I love those bright colours :)

Your September piece is a cute one. Love the owl! Happy birthday to Murphy; he is a handsome boy.

Good Morning Vickie,
I love your September stitching...just lovely! The whole design is just perfect! Being a teacher September is my favorite month of the year...a new school year with so much promise and signs of Fall!

I love Jennifer Chiaverini's books but have not read this one yet. It sounds like a really good one...I will have to look it up at the library...grins!

I am feeling stronger and slowly getting back on my feet! Hurray!

Have a good day my friend! Sending lots of hugs your way!

You are ahead of the game!! September looks wonderful... bright and cheery, tho some of the children might object to the implications that summer is over! At least time wise... weather now, that is another story! Happy Birthday to Murphy! I believe our Thor is 14 this year... he is such a sweetie. Hugs!

Love the stitching!! There is a stitching camp that I attend each year and we had Cathy H. of Hands On Designs a couple of years ago as our guest teacher. She is so nice, and she is always coming up with designs that are new and different. Do you plan to frame it or make it into something else? I hope you are feeling better. Happy stitching........

What a pretty stitch but I can't believe it's almost September already!

September is adorable. Happy Birthday to Murphy too!

Happy Birthday, Murph! And I love that last pic--so cute!

September is a wonderful pattern - well done! And Happy Birthday to Murphy.
That book sounds fascinating - thanks for the review.

Oh! Vickie you already into September stitching. It's a wonderful pattern and a lovely finish.

What a wonderful September piece. I like it. The owl is vey cute.
Happy Birthday to Murphy.
Greetings, Manuela

Lovely stitching! Congrats on the finish, it's really sweet :D

Oh, I love this series - unfortunately we do not geht this magazine here in Austria. But I enjoy seeing the sweet stitched versions of yours!
Happy Birthday to sweet Murphy!

Great job on your September stitch. It is very cute.

Love your stitchy finish. The owl is so cute. :) Awwww he's so adorable, Grandpa or not, he's still a little cutie. :) Blessings always sweet friend. :)

Lovely one over one stitching and beautifully finished. So glad that you enjoyed the book and Happy Birthday to dear Murphy - isn't he cute in his birthday hat?

What a darling stitch Vickie - you know me and owls! I am charmed!

Happy Birthday, dear Murphy! How lucky he was to find himself adopted into such a poodle loving home :)

Your September stitch is darling--love the owl. And the book sounds very good. I've always meant to read something by Jennifer Chiaverini, but haven't done so yet...

He is so beautiful!! Happy birth!! I'm late, i Kknow, forgiveme please!