Hi friends! I completed January in the Snowflower Diaries SAL. 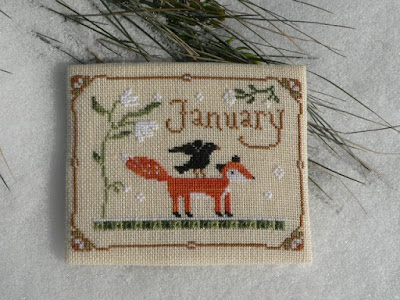 I stitched this one over one on 25ct cream linen using VMSS for the orange and DMC for everything else. 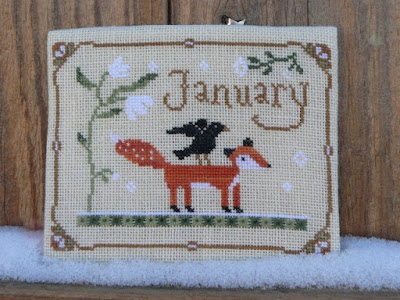 I did not want the flowers and snowflakes to be barely visible, so I used two strands of B5200 for those. 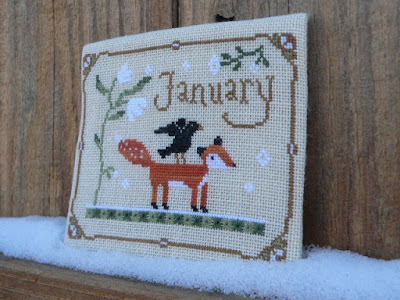 I am glad I made time now to stitch January. I did February first. I need to stitch the Hands On Design January pattern yet. Then I will be caught up with my three different monthly pattern series. I have so many other patterns set aside for my cubby shelf. I will make sure to do the Snowflower Diaries, Hands On Design and Palko's months first. Then I will worry about adding in other patterns for the little cubby holes.

I have begun stitching the March pattern by Maja/Snowflower Diaries. It is another sweet one.

Wednesday I gave Murphy a bath. He is good for that. Then an hour after his bath, I gave him 1.5 tablets of his sedative(the maximum dose), so I could groom him. I waited one hour for the drug to take effect. NOPE!  He may be 12 1/2 years old, but he does NOT like grooming at all, and it takes a lot to knock him out! So I called the veterinarian. He said we could give him valium  the next day instead.So Brian picked up the valium. Thursday morning when Murphy finally woke up (he is not an early riser ;) I gave him 1/2 a tablet as instructed by the vet. I waited 45 minutes and gave him the other half because he was wobbly, but still walking around. WELL I will say this again it takes a lot to knock him out!!! Thank God Brian came and helped me. I just do not even know how I groomed him last time, unsedated and by myself. His clip is not perfect, and as hard as it is for me to accept, it is never going to be. This guy is one heck of a fighter!!! Wow.

Brian told me he will be there to help me in a few months when it is time to do Murphy again. And we are giving him the whole tablet from the start. I am sure I will still have to muzzle him and have him wear a cone/ E collar. Yikes!

Thank you all for your kind words on Madeleine's art. I passed along all your encouraging words to her. Boy, did you guys ever make her smile! :) 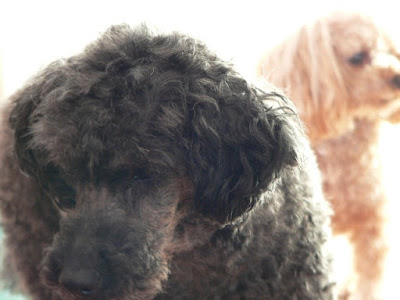 My dear it's so beautiful
I am so late with my stitching..oh dear I better hurry up and stop dreaming..lol
Love you x

Your stitching is so pretty and I love how you made the white stand out :)
Awe.... Poor Murphy. But it's good that you somehow managed to groom him again. I remember reading about the first time you groomed him, such an ordeal and a shame he does not like it. I was thinking maybe that it might if got a little easier the next time around.. Sorry it must be very hard for you as well as frustrating. Wow! One tough poodle! Yes maybe the whole tablet in one go next time! Bless him. I am sure he feels much better after his grooming session, it's just the process of getting it done.
Sending smiles for the weekend :)
Xx

Lovely job on January, these patterns are so lovely aren't they!

You must have a very tough doggie there, lol he knows what's coming and fights against it :-)

Lovely stitching Vickie.
You have one strong dog in Murphy.He must feel better for his grooming though.

A lovely finish :) It sounds like you have a good solution for grooming poor Murphy.

Another lovely finish!
Love your picture with the snow, looks great.

what a sweet finish! I need to get busy on this one. Of all the charts out for this SAL, this one is my favorite so far.

Nice finish. I like your choice of color for the fox and ramping up the white. I did mine over-one as well and it doesn't pop as well as I would like with the suggested DMC colors. Finished Feb last night and now on to that cute Mar. design.

That is one tough doggie! And you are tough too to handle him!

Your stitching is so pretty, the whites are really visible. Murphy is so cute, great job:)

A beautiful finish. I'm glad you persevered with Murphy. At least you have time to prepare yourself for the next ... battle!

Awww sweet little Murphy, not going down without a fight. It's probably a good thing your husband will be around for the next time.

Lovely finish.
The pattern from Snowflower Diaries are so sweet. I like them, too.
Have a nice weekend, Manuela

I will be starting March today. I give you a lot of credit with the grooming. Great finish

Poor Murphy is not amused, seen his look on the picture LOL
This was quite a project! I bet the stitching pasrt was easier ...
Your finish is lovely. I loved the first two patterns very much already and the third is just gorgeous, don't you think? Very much Spring, my favourite season :)

The January Snowflower piece is gorgeous.
Your Murphy sounds like my son, we have to cut his hair when he's asleep! I don't think the doctor would authorise valium for a 7 year old LOL

Cute fox in your January finish! And Murphy looks so handsome! You did a fine job!

Such a cute piece. Great job on it.

Your Snowflowers piece looks so wonderful in the snow! I have been saving these patterns as they come out, maybe I will stitch them sometime in the future. I have learned my lesson about not saving freebies as I see them!

Poor, poor Murphy. He acts like he had a horrible grooming experience at some point in his doggy life. Perhaps someone cut too close. Maybe he will grow to trust you guys and calm down a little.

Poor Murphy...grooming is just not his favorite pastime...lol. Molly our yellow lab does not mind a bath when we give her one, but if we take her to the groomers...that is a different story...she refuses to walk in the door...that is always fun....Your stitching is lovely as always...I love that little fox, he never ceases to make me smile...lol. I too love her March pattern...just wonderful. Thank you so much for your encouraging email. It meant a lot. I am resting after chemo now...but will send one soon. Keeping you in my prayers. Have a good weekend my friend.

Such a cute finish! I love this SAL and I'm collecting the charts, but I don't think I'll be able to get to them until next year. Always something to look forward to!

Poor, poor Murphy! What a terror it must be for him to be groomed! Our schnauzer really hates it too, but will manage to get through a session at the groomer. I sometimes do some touchups on our ShiTzu, but that's about it.

Love seeing your January all finished!
Have a lovely weekend!

Great job on your January.

Beautiful finish! Wow! Murphy must really hate to be groomed! Poor all of you. I don't envy you and Brian the job at all. Thank goodness Brian was there to help this time, and will be there next time too!

a very pretty finish, those designs are so cute.
So sad for Murphy, that he doesn't like to be groomed.


Lovely stitching Vickie I love the SAL I am looking forwaed to starting it myself soon.

Oh it can be so stressful grooming our pets , I know when I use to do Poppy it was legs first then her head and then the rest of her so she would have to stay in all week ha.

Dear Vickie,
the January has become fantastic engraving. It's so great that you embroider it . However, the designs are also enchanting. Murphy is a fighting spirit , a strong will . I hug you
Your Sandra

Such a cute finish, Vickie--you will have a great time this year filling up your cubby. Best of luck with Murphy's next grooming attempt :)

Lovely finish, Vickie - I am yet to start and here it is already March!

Gorgeous finish! I am loving these sweet designs :o) Each one is more cute than the last!! It is great seeing everyone stitch them around the blog world!
Oh dear... poor Murphy! He really doesn't want to be clipped! I can't imagine how he managed to fight the Valium and stay awake....
Hugs xx

Great that you could finish Maja's January chart. That's such a beautiful monthly SAL.

Lovely stitching of your fox, Vickie!

Shame about your problem grooming Murphy. We have problems with our cat! She hates it when we put her flea treatment on. DH has to hold her very tight while I try to part her fur to put the treatment on her skin, she hates it, and DH has to suffer her digging her claws in his legs as she attempts to jump away from us! The things we have to do for our little buddies!

Your stitching is beautiful. I see all these wonderfull calenders pass by and I'm thinking of joining aswell, although I still have enough to stitch.

Dear sweet Murphy , my girl hated grooming too and being adopted he probably had a bad experience and poodles never forget and maybe he just cannot forget although the fact he has a wonderful new home. Hard for you too , I know that feeling....but he must feel better and nicer , cleaner and poodles love to be loved and I like to think they like the fuss..and compliments despite the hassle to get there xxxx

Such a lovely finish! Hard to keep everything organized at times, isn't it?

I'm so sorry Murphy is such a handful when it comes to grooming. I wonder what happened to him in his "before" life.

He looks adorable! I'm so impressed that you groom them yourselves. I'm thinking I would like to do the same, especially after the last horrible experience. Do you have any advice?

So generous of the designer to offer this fun series for free!

Poor sweet Murphy. Our dog never had grooming issues, and bath issues were no different than most dogs, but our dog was pretty tolerant. Our cat on the other hand . . . Traveling was always a chore. She was 1/2 Siamese, and tgave us her opinion throughout the trip. After her first tranquilizer for a flight oversees (we were moving), she fought every other dose. We decided after the flight back to the states it wasn't worth it and let her complain without the tranquilizer.