Hi friends! We had unseasonably warm weather and lots of sunshine over the weekend.Most of the snow melted. So nice.

I have been busy stitching up December and January in the Year of Celebrations series from Hands On Design. Both of these patterns are found in the January 2014 issue of Cross Stitch & Needlework magazine. These two took me longer. Take a look, do you see why? 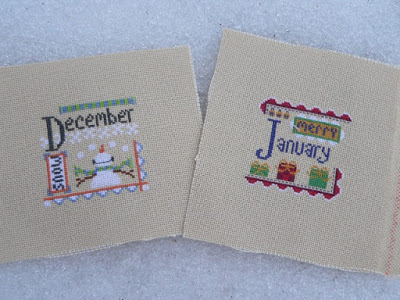 THIS is how the patterns are charted to look. You can see I made significant changes. My reason for swapping these two months is because Brian and I are Orthodox Christians. Christmas is January 7th for us, not December 25th. 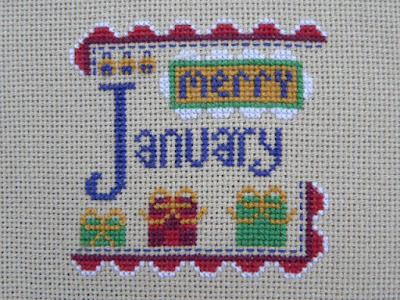 I wasn't too keen on the elf legs, so I stitched up two more presents instead. 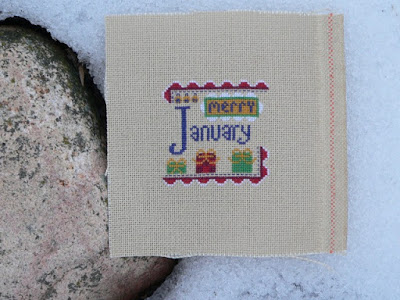 Merry January has a nice sound to it, doesn't it? 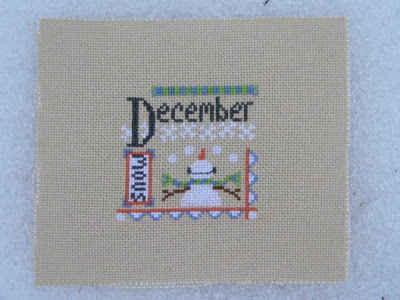 Making December up in this way took me a while to figure out.  Since the word December is longer, I had to rearrange and leave out a bit. I also elongated the scarf. I also took out the word frost and put in snow. December definitely means snow to me! 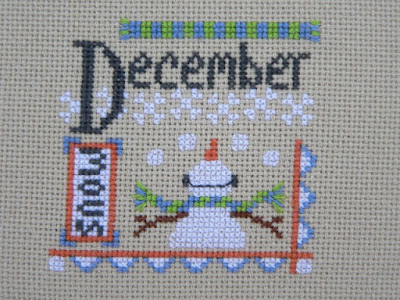 Both of these patterns were stitched up on 25ct New Khaki lugana, one over one with DMC. 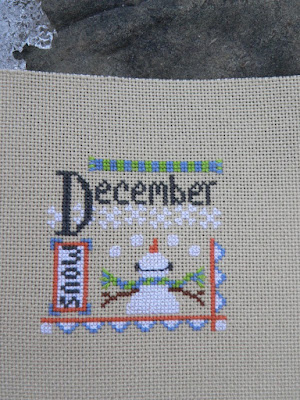 I will be making these up into pinkeeps today. Then they will be ready for display in the cubby shelf when their month pops up. 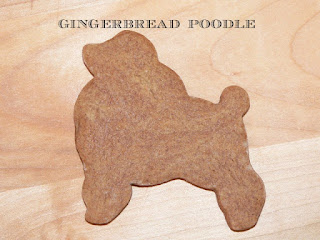 Thank you for stopping in with me today. I am so glad you did. Have a super week in the Lord. 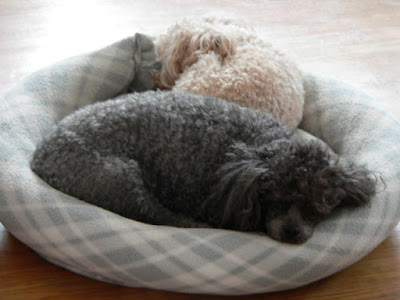 Love your Christmas stitching , I have these somewhere in my to do piles.
Lovely cookies , hard to eat them they are so sweet.

Nice finishes:) You've done well with your changes:) Your furbabies are so cute!

You did a great job changing the pattern to fit your beliefs/style. The cookies are adorable, as are the real-life pups!

That is what is so cool about making things yourself. You can change them to suit your own life. I love how you always make changes to charts. And to be honest, your changes always, always make the design look much better, too. :) Love those copies! And is that a cute little pile of pups I see there? Bless them, they always make me smile with their cuteness! Blessings always sweet friend. :)

Beautiful stitching and I love your Cookies - how sweet. Hope you are feeling a little better my friend xx

Your 2 finishes look beautiful! Love how you made changes to both! Your gingerbread poodles are darling! love Annette

That's a great way to change the designs to suit your family. Your cubby is going to look so good each month.
Love the poodle biscuits too!

You did a great job of making these designs "you," Vickie! Love them both. And how cute is the poodle cookie--I LOVE anything gingerbread :)

Congrats on the adorable finishes Vickie.

Hi Vickie, Your stitching is beautiful as always :) The cookies are adorable...I love gingerbread. Your puppies look so cozy. Keeping you in my prayers as always.

Hi Vickie, Your stitching is beautiful as always :) The cookies are adorable...I love gingerbread. Your puppies look so cozy. Keeping you in my prayers as always.

Your changes are very well done and the patterns very sweet.

The cookie poodle is almost as cute as the real ones snoozing.

I love what you did with the two designs! Very nice -- and they came out perfectly too. You are so clever to figure out how to make these designs correct for you! Lots of prayers being said for your epidural on Wednesday. Lots of positive thoughts too.

Your finishes are so cute. I have these on my to-do list too.

Lovely Christmas stitching - those are great designs. I need to bake cookies this week.

Such beautiful stitching - I love both pieces.

Lovely stitches! And my those cookies are the best of course ;)

Have a nice day! Love, Carolien

Lovely stitching. Love your adaptations and color choices. Always good to make it you own.

Lovely stitching. Love your adaptations and color choices. Always good to make it you own.

Your January and December will your have erred . I did not know that Christmas with you is only in January , thus learned again what ... smile ...
So you've changed it just right for you .
I hug you
Your Sandra

You are always so very creative and adapt the designs to your needs so successfully. Two great monthlies again, Vickie.

Good for you changing the design to suit your personal beliefs. I love the poodle theme and the photo of the two of them snuggling made me smile.

Gingerbread poodle cookies! Pretty cool! You stitched a lot of changes on those two small pieces, and they look great! Thanks for sharing!

Great job on both of them.

Cute patterns and your stitching is perfect! And I'm sure those cookies tasted wonderful. :)

Love Cathy's designs. They're all so cute... and she's such a friendly lady. :) Congrats on your finishes.