Hi friends! I have another patriotic finish to share with you. Land of the Free by Elizabeth's Designs 🦅 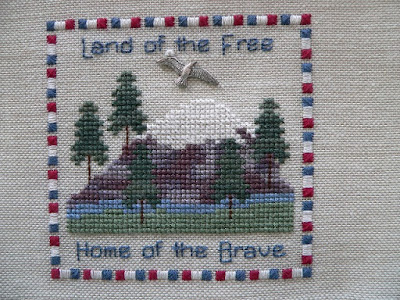 Love this satin stitched border so much!💖💙This kit was a gift given to me by our friend Robin Thank you Robin❣️This will be for the July pedestal frame. This was stitched on mystery 32ct linen, two over two with the provided overydyed flosses and DMC.

Would you like to stitch this? I am giving this pattern away now. There are just tiny, little pieces of the overdyed floss left. And the eagle charm has been used on my piece above obviously, but this is for the chart only. You must be a sidebar follower of my blog, and you must leave a comment on this post stating you would like this chart.  I will draw the name of the winner on Monday, July 22nd.

I am now stitching a sweet freebie.

The winner of the Lizzie Kate Fip It Blocks With Charm July chart is:  RJ! 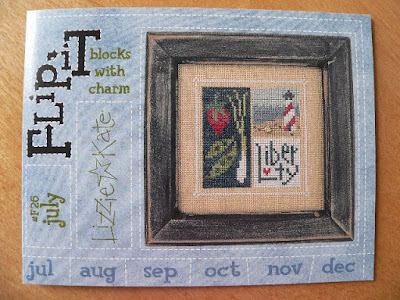 I just got done listening to The Man Who Broke Into Auschwitz. I checked this audio book out from my library totally based on the title alone! This is a true story of a British POW in Auschwitz who traded places with a Jew on several occasions. Just unbelievable, except it really happened! He could not talk about it until he was an old man.
The Man Who Broke into Auschwitz is the extraordinary true story of a British soldier who marched willingly into the concentration camp, Buna-Monowitz, known as Auschwitz III. In the summer of 1944, Denis Avey was being held in a British POW labour camp, E715, near Auschwitz III. He had heard of the brutality meted out to the prisoners there and he was determined to witness what he could. He hatched a plan to swap places with a Jewish inmate and smuggled himself into his sector of the camp. He spent the night there on two occasions and experienced at first-hand the cruelty of a place where slave workers, had been sentenced to death through labor. Astonishingly, he survived to witness the aftermath of the Death March where thousands of prisoners were murdered by the Nazis as the Soviet Army advanced. After his own long trek right across central Europe he was repatriated to Britain. For decades he couldn't bring himself to revisit the past that haunted his dreams, but now Denis Avey feels able to tell the full story—a tale as gripping as it is moving—which offers us a unique insight into the mind of an ordinary man whose moral and physical courage are almost beyond belief.

“Then he said to them all: ‘Whoever wants to be my disciple must deny themselves and take up their cross daily and follow me. For whoever wants to save their life will lose it, but whoever loses their life for me will save it.’” Luke 9:23-24

Thank you my friends for stopping by. I truly appreciate your kind words. I hope you have a great week! 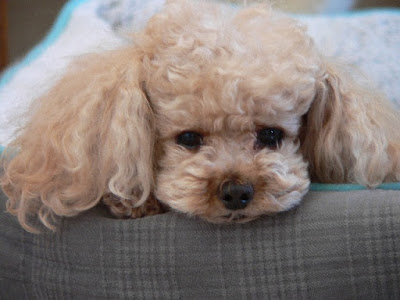 Hi Vickie! Oh that stitch is adorable. It reminds me of the Grand Tetons which I love. I have just won your last pattern so I will pass so someone else can win. But, it is wonderful.

Hope you had a great fourth. You made some great patriotic stitches. Love them all. RJ

What a pretty design.
Congrats on your finish.
Have a great week!
Marilyn

The book sounds very interesting. I’m going to put it on “my list”.

Lovely stitching finish. I love it very much.
Enjoy the day, Manuela

I'm going to recommend that book to my hubby..sounds interesting.

That is awesome. I love patriotic projects. I look forward to seeing what freebie you are working on. I have put up a new post with my new project. Wising you a great day sweet friend. ((hugs)) :)

OH, Congrats to RJ!! I'm going to ask to borrow that when she is done with it...I would love to stitch the lighthouse for my friends cubby. Your new finish is lovely...I'll pass on this one but thank you for the offer. Love your photo of Henry!!

Well done on your patriotic finish, Vickie! I look forward to seeing it on the pedestal frame. Sounds like a good book; thanks for the recommendation! Give your sweet pup a scratch from me! Have a super week!

Vickie: What a beautiful design, I love the flying eagle.
Thank-you for the heads up on the book, I am going to start reading the Tattooist, he was a Jewish man who tattooed the prisoners at Auschwitz, about Love and Survival, written by Heather Morris a true story.
Congratulations to RJ.

I love your little design and that book sounds fascinating. Another to add to my list.

I love both your patriotic finishes. Just beautiful! That picture of Henry is priceless! As for the book -- wow. So many amazing people in the world. I'll have to look this one up.

Congrats on the super cute finish Vickie. I would love a chance to win the chart.

What a cute design! Sounds like another amazing WW2 book!

A beautiful finish and a very interesting book suggestion, Vickie. Another that I think I would enjoy reading :) The border in your stitching is so pretty and the eagle completes it perfectly!

What a wonderful finish, the eagle really makes it.
Oh my, what a story to tell, he was certainly brave to do that.