Hi friends! Yes, that is right! I turned 50 years old yesterday! My mom is having us all over on Sunday for a birthday party. I will share a picture of my cake with you next time. Brian has ordered a special cake.😁 It will be pink with a poodle on top! No, I am not kidding you!

I have not had much opportunity to stitch this week. I did want to share the winner of 'Secret Flower Bed' by The Trilogy pattern. 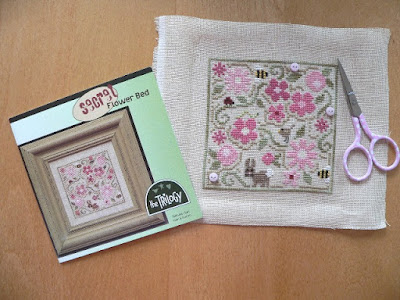 I had thirteen ladies enter the giveaway. The winner is: our friend Vicki

The Last Year of the War by Susan Meissner was a very good book. I really did not realize German Americans were sent to internment camps, did you? Even Italians. And then forced to be sent back to Germany and Italy. I knew about the Japanese Americans. What a sad part of our history.
Elise Sontag is a typical Iowa fourteen-year-old in 1943—aware of the war but distanced from its reach. Then her father, a legal U.S. resident for nearly two decades, is suddenly arrested on suspicion of being a Nazi sympathizer. The family is sent to an internment camp in Texas, where, behind the armed guards and barbed wire, Elise feels stripped of everything beloved and familiar, including her own identity. The only thing that makes the camp bearable is meeting fellow internee Mariko Inoue, a Japanese-American teen from Los Angeles, whose friendship empowers Elise to believe the life she knew before the war will again be hers. Together in the desert wilderness, Elise and Mariko hold tight the dream of being young American women with a future beyond the fences. But when the Sontag family is exchanged for American prisoners behind enemy lines in Germany, Elise will face head-on the person the war desires to make of her. In that devastating crucible she must discover if she has the will to rise above prejudice and hatred and re-claim her own destiny, or disappear into the image others have cast upon her. The Last Year of the War tells a little-known story of World War II with great resonance for our own times and challenges the very notion of who we are when who we’ve always been is called into question.

I hope you have a good weekend my friends! Thank you for stopping by! 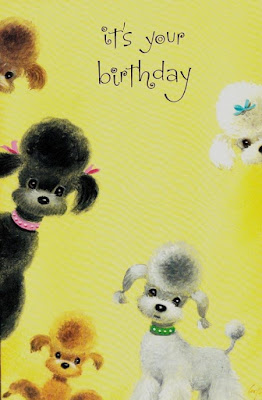 Afterwards, all dear and good wishes for your birthday. I hope you had a nice day and let you party properly. I am very curious about Brian's cake.
Have a magical weekend,
Big Hugs, Martina

HAPPY BIRTHDAY Vickie , you are the same age has my daughter now .
Have a lovely day can't wait to see the cake .

Hello Vickie,
Happy Birthday. I hope you had a wonderful day with your family.
Can't wait to see the cake.
I will be 50 years old this year, as well.
Have a nice weekend.
Hugs, Manuela

Happy 50th!
OMG! You will, for sure, have to show us your cake!!
Have a great weekend celebrating.
Marilyn

Happy birthday to you my friend. Of course there will be a pink poodle on the cake!

Happy Birthday Vickie.I am looking forward to seeing your cake.

Wishing you the happiest of birthdays, Vickie! I look forward to seeing a picture of your special cake. Enjoy your family gathering on Sunday!

Happy B-Lated birthday sweet friend! :) Oh Thank You for pulling my name to win the lovely chart. I can't wait to start. Wishing you a most lovely day. :)

Happy Birthday Vickie, I hope you get loads of fun gifts.
Congratulations to Vickie.

Dear Vickie, sending you very hHappy Birthday wishes from across the ocean, I hope you have a fabulous birthday!
We do have very similiar reading tastes don't we? This book is on my list too.
Have a fun weekend xx

Hope you had a fantastic day.

Looking forward to seeing your cake.

Happy Birthday a day late, Vickie! I hope this new decade brings much love and happiness your way :)

Love Susan Meissner books and am reading Lady In Waiting by her right now. I am SUCH a slow reader, but I'm enjoying it very much. Am on the wait list for this one--glad you enjoyed it!

Happy Birthday, dear Vickie!! Hope you had a fantastic day!!
Have a lovely Sunday Birthday party! Can not wait for a photo of your cake! ;)

Happy Birthday Vickie 🎂 I hope you celebrated the big 50 in style! It's quite nice this side of the half century 😉

I hope you had a very happy 50th birthday! We just got back from vacation so I'm catching up on blogs. I loved seeing your cake on instagram! I did know about the Germans and Italians. I think I found out through fiction, like you, but a different book. Anyway, enjoy the rest of the weekend!

Hope you had a wonderful Birthday, can't wait to see the cake photos. Of COURSE it had to be pink and have poodles!

Caatching up today, so i'll fast forward to a post with the cake and wish you a Happy Birthday on there as well as here. I hope you had a wonderful day with your family.

Have a lovely time at your Mom's Vickie. 50 is a very special birthday. Enjoy!!! RJ

Belated Happy Birthday to you! x