Hi friends! I forgot to share this little finish with you. It is a freebie from our friend Palkó. I stitched this one over one on 25ct white evenweave using the sparkly, pink Madeira floss I received from June. ♥ 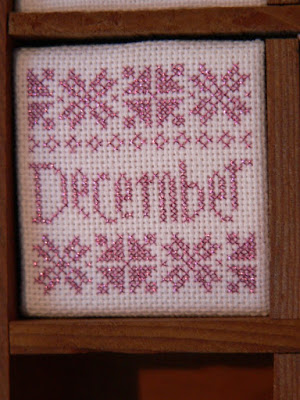 Here are my December pieces on display. This picture is awful. Sorry. It was snowy and overcast and I had lights on, but the picture still is blurry. I think you kind of get the idea. 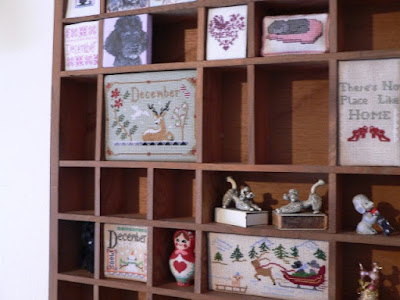 I finished reading book number two in the Maisie Dobbs series a while ago. I truly enjoyed it very much.
Birds of a Feather (The Second Maisie Dobbs Mystery)
Jacqueline Winspear’s marvelous debut, Maisie Dobbs, won her fans from around the world and raised her intuitive, intelligent, and resourceful heroine to the ranks of literature’s favorite sleuths. Birds of a Feather, its follow-up, finds psychologist and private investigator Maisie Dobbs on another dangerously intriguing adventure in London “between the wars.” It is the spring of 1930, and Maisie has been hired to find a runaway heiress. But what seems a simple case at the outset soon becomes increasingly complicated when three of the heiress’s old friends are found dead. Is there a connection between the woman’s mysterious disappearance and the murders? Who would want to kill three seemingly respectable young women? As Maisie investigates, she discovers that the answers lie in the unforgettable agony of the Great War.

I have almost completed the Christmas ornament for my young Ukrainian friend. It is filled with specialty stitches. I did not realize how long this would take me! Oh well. It is going to be a very nice gift. Then on to Brian's Christmas ornament.

I hope you have a beautiful weekend my friends! I would like to wish you a Blessed, Happy New Year! Thank you for stopping by. Wonderful little ornament. I like your display.
Have a Happy New Year.

Your December ornament collection is lovely,Vickie.I love Santa,his sleigh and reindeer with your little poodle on a sled:)
Wishing you a Happy New Year too.

All of your finishes are just beautiful.
Happy New Year to you!

Good morning, Sweet Vickie! Pink AND sparkly? That is definitely a win-win. LOL

I love your over-one stitching. It is so very beautiful...you have a lot of talent. SMILE

I hope you have an amazing day!


What a lovely stitch , happy you liked the pink thread.

Such pretty pieces in your December cubby, Vickie! I'm glad you have a bit longer to finish Brian's ornament. I was trying to do a last minute one for my son, but didn't finish, so I will save it for next year :)

Wishing you every happiness in 2017 (and far fewer headaches!!).

Your pink sparkly December block is precious. I always enjoy seeing your monthly cubby picture. Wishing you a peaceful New Year with many blessings and fewer headaches.

Vickie: Happy New Year, I love the pink finish so bright and sweet looking.
I am an avid reader these books are on my list to read, I put books in a drawer pull one out and read it and do the same for the next set of books.
Your shadow shelf looks wonderful.

I love your display!! Your ornament is so lovely!!
Happy New Year!!

The thread from June stitched up beautifully.
Wishing you good health for 2017

Your December collection looks so pretty!

Hi Vickie,
I love your latest December finish and your cubby looks wonderful! The pink floss is just beautiful and is so very much YOU!

I have to read the Maisie Dobbs series! It sounds just wonderful!

Happy New Year my dear friend! I wish you a year filled with love and joy and lots of wonderful memories with the people you love! I am also praying that 2017 is a headache free year for you!

Your December display is lovely.

Sounds like another story I need to hunt out at my library.

Beautiful December display and I love your new stitch with the sparkly pink floss!
Wishing you a very happy new year.

Vickie, I do love how you're stitching for the wooden display--very clever and fun!!!
Happy New Year!

That's a very pretty pink and sparkly finish, Vickie! And it's nice seeing all of your December finishes together. : ) Wishing you and your family a very happy new year!

The December stitched with the pink thread is awesome as well the little Robin in your last post! I wish you a Blessed New year 2017 !

Lovely December display! A Blessed New Year to you and your family.

All the best for this coming year Vickie, I do hope your health issues recede.

Your cubby looks wonderful with all the little stitching and Ornaments. Palko's series of months are so sweet.
I hope that 2017 is a better year for your health and you avoid headaches of all kinds!

Your December shelf looks great, Vickie. And that pink addition after a freebie from Palko is just beautiful - and so you :)

I always enjoy seeing your shelf each month, even if it's a little blurry! The weather doesn't always cooperate with us in our photography endeavors. :)

Have a Very Merry Christmas tomorrow! I hope it is pain free for you! Love the pink ornament, of course! You December display is great! Hugs!