A Tiny Bit Of July

Hi friends! Is it terribly hot by you? It certainly is here. I have done nothing but hide inside the house in the A/C to avoid soaring headaches.

I finished up the tiny July sampler from 365 Tiny Cross Stitch Designs. 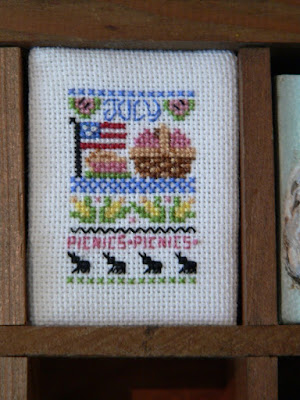 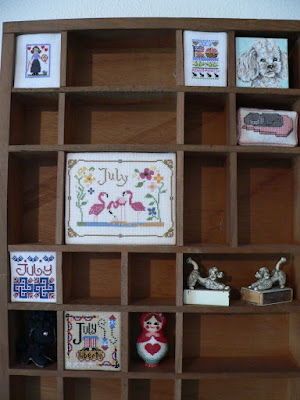 This was stitched one over one with DMC on 25 ct white evenweave.

I have now begun the August Joyful World SAL.

I have drawn the name for the winner of the SB Flag chart..... Christina!  :)

I finished reading Jane and the Genius of the Place by Stephanie Barron. AWESOME reading my friends. I tried. I truly tried from the start to pay close attention to detail so I could figure this mystery out!! I could not. I love that. ;)

For everyone who loves Jane Austen...The fourth engaging mystery in the series that recasts the well-loved author as a sleuth!

In the waning days of summer, Jane Austen is off to the Canterbury Races, where the rich and fashionable gamble away their fortunes. It is an atmosphere ripe for scandal—but even Jane is unprepared for the shocking drama that unfolds. A flamboyant French beauty, known for her brazen behavior, is found gruesomely strangled in a shabby chaise. While many urge the arrest of a known scoundrel with eyes for the victim, Jane looks further afield and finds a number of acquaintances behaving oddly.

As rumors spread like wildfire that Napoleon's fleet is bound for Kent, Jane suspects that the murder was an act of war rather than a crime of passion. Suddenly the peaceful fields of Kent are a very dangerous place...and Jane's thirst for justice may exact the steepest price of all—her life.

Thank you for your kind words of encouragement. I am grateful for your friendship! Have a wonderful week!

What a cute little July piece. Love how much thought you gave to it and I think your changes really make it special!

It is always hot here. Stay cool and stitch on!!

What a sweet July piece! I like your changes and no, I wouldn't eat tan corn. Stay cool, Vickie!

Good Morning Vickie.....Okay I am in love with your July stitching and your cubby is just precious! I would have changed the corn to yellow too :) I really had to laugh when you were talking about the ants...they have been bugging me too...in real life....they think my kitchen is the place to be....oh well at least my cupboards have had a good cleaning! I hope you are having a good day my friend....it has been so terribly hot here too! Sending hugs your way!

That's a sweet little sampler for July. I remember the others you stitched from the same book, they are all very beautiful.
It seems to be extremely hot in some parts of your country, so it's no wonder that you prefer staying inside because of your headaches. Let's hope that the new medication will help you.

I will be checking in to see if the blood pressure medication works for you. Fingers crossed! Lovely little stitcheries..all pretty together.

Lovely, you do nice needlework and I love the designs. Happy Stitching Alice Margaux.

Very cute finish. I agree with the color changes, I have never seen tan corn before.

Your July collection is wonderful. Stay cool as Dennis and I are trying to do with this heat here in Arizona.

Wonderful little finish. I like your shelf very much.
Greetings, Manuela

I really like how your shelf is turning out. Beautiful stitching!
Keep cool.

That's it. I am officially crowning you Queen of Over One.

Another cute July finish! They certainly look good in the case! Hugs!

Your July piece is lovely! Tan corn????? I totally agree with you, yellow is much better. It seems I'm always changing colors.

Love your latest piece. At first glance I thought they were little black rabbits which I would much rather have at a picnic than ants!
Your colour changes are very sensible. Did I ever mention that I got a copy of that book?

Congrats on another adorable finish Vickie.

July looks very cute and so does your cubby. I have that author on my list to look for next time I'm at the library. I enjoy all things Austen and Regency.

Hi Vickie! You be sure to stay cool right in the draft of the A/C! It's a great time to get some stitching and reading done. But I need to be sure to keep my roses watered - weather like this really dries them out.

Your collection on July stitches is wonderful.

Lovely finish! I hear you - it's boiling hot here and I've basically been hibernating all summer. Keep cool! :D

Your cubby collection is growing, lovely finish for July.

It's just about right here in the middle of England at the moment, we have had some very hot (for us) temperatures the last couple of weeks, i for one am glad it's cooled off a little.

Love your finish. :) Wishing you a day filled with many blessings sweet friend. :)

Yes, this heat is getting to me, Vickie--I feel like a slug! And yesterday at the library the AC wasn't working. What a long, exhausting day that was... I do love this latest July piece with the teeny American flag--adorable. And I agree--the poor ants need six legs :)

Hi Vicky, thanks for passing by. Very cute your stiching and the changings are lovely:)) have a nice week🤗💓

The second July piece ia very sweet I like again every little detail you included to it ! We have so HoT here have to go to our swimming place at the evening!

Super cute finish, Vickie! Nope, no tan corn for me! I love how your printers block is turning out.

Hot here too, but I am blessed that it doesn't bother me. I love your Summer little tiny sampler and it looks so perfect in your Summer Display. I agree, you must have yellow corn

You really do such a great job with changing colors! Color is something I struggle with. It's not intuitive for me at all. I agree with you - corn should not be tan! :)

I love your tiny July sampler! In fact, I love them all so far and adore your display <3 what a great idea! Your changes to the design are perfect, too :) great job!
Congratulations Christina!
Stay cool, dear friend
Hugs

Your tiny little July finish is cute - and I must say I love the ants in your stitched piece much better than in my house. We have had such a problem with them this summer. Maybe they are just trying to escape the horrible heat. And I agree - tan corn? : )

Your stitches are lovely. Picknicks are great, I love to do that!

Have a good day, my friend.

Very cute finish!
Your display is lovely! Pretty pieces!!
To much hot here.
Have a wonderful weekend!

Love the finish! Your little cubby drawer is so neat. Sorry you have to stay indoors with the heat. :(

Wish that I could send you some of our winter cool! Love you finish for July and your July cubby is looking fabulous.

Congrats on another pretty finish to add to your July collection:)

Wonderful stitching. What a nice way do display your work!

We could easily take some of your heat Vickie, it's been a very cool summer here in Scotland.