Hi friends! Madeleine is a high school graduate! :) It was a wonderful ceremony on Saturday. It seems bittersweet to have no more children in high school.

I had time to finish the June pattern in the Year of Celebrations from Hands on Design. This pattern can be found in the July 2014 issue of Cross Stitch & Needlework Magazine. 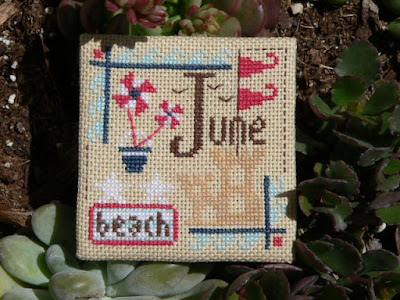 I stitched this one over one on 25ct New Khaki linen using DMC and WDW. I could not find the DMC conversions for Capri or Terra Cotta online anywhere, so I chose 347 for Capri and WDW Straw for the Terra Cotta. 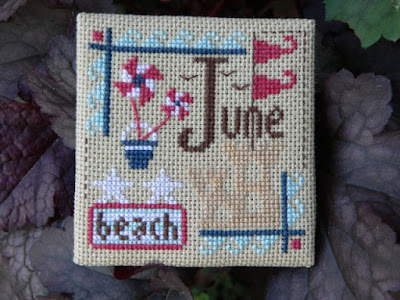 Remko Brant had never been so sure of anything as escaping the Authority City with Carrington Hale. But bravado comes easy when you have nothing to lose. Now a husband, father, and the tactical leader of the Seers, Remko has never had so much at risk.

As he and his team execute increasingly dangerous rescue missions inside the city, they face growing peril from a new enemy. Recently appointed Authority President Damien Gold claims to be guiding a city shaken by rebellion into a peaceful, harmonious future. But appearances can be deceiving. In order to achieve his dangerous ambitions, Gold knows he must do more than catch the rebels―he must destroy the hope their message represents . . . from the inside out.

With dissension in his own camp―and the CityWatch soldiers closing in―Remko feels control slipping through his fingers. To protect those he loves, he must conquer his fears and defeat Gold . . . before one of them becomes his undoing.

I am now finally stitching  Palko's free May pattern from last year. I had not forgotten for one minute to stitch it up, I just wanted to get at least two of my three monthly pieces stitched and mounted in the cubby shelf for June before the kid's graduation party preparations get too hectic. 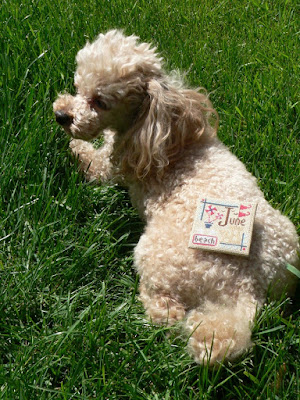 Your beautiful stitching is being modelled so lovely!

I know the feeling -- now just imagine what it feels like to have no more children in college! lol! Talk about bitter sweet! The time goes too quickly! But congratulations again to Madeleine and to her proud parents! Love your stitching finish too!

I like your June stitch. Very nice substitutions! Best wishes to Madeleine on her HS graduation!

Congratulations to Madeleine. Your June stitch is perfect.

Perfect timing for your fun June finish! Congratulations to Madeleine. I'm sure it is an odd feeling, having your youngest finishing high school, but I am happy for you that you're not facing an empty nest just yet. You'll actually enjoy seeing your good parenting proven as your not-so-little anymore "chicks" spread their wings and successfully fly on their own. Be proud of yourself, too - you deserve it!

Congratulations to Madeleine! Your June stitch is sweet.

I am glad the ceremony abd celebration went well. You are on a roll with your 2 stitching series.

Congratulations to your daughter! I'm sure her future will be bright :)

Very cute June piece, Vickie--Henry seems to be quite the willing model, too!

Have a lovely Memorial Day with your family...

So cute piece of stitching -Well Done!! Guess what my DD and her BF have bouht a house !! they will move in tomorrow...Congratulations for Madeleine !

Congrats on the adorable finish Vickie.

June is a lovely little summery design, it will look great in your cubby.

Congrats to Madeleine! You must be so proud of her!
Lovely stitching :)

Congratulations to Madeleine! And best wishes on her future endeavors. Graduations can be emotional and mark a new phase in our children's lives as well as our own. I always look at them as the start of a new adventure. Love your sweet finish and your adorable model. : )

Congrats to the graduate. Lovely finish:)

June is going to make a lovely addition to your cubby - and a pat on the head to your wonderful model.

Congratulations to Madeleine - and her world gets a bit bigger!

Congratulations to your graduate! It is strange not having children in high school, isn't it? It took me a while to adjust, especially since we homeschooled. Suddenly, my days changed completely!

Love your June piece! So cute! My favorite picture is of your piece on Henry. LOL Adorable!

Wow such a nice and patient model, I couldn't do that with our cat Fietje!
The stitches are beautiful, love the pinwheels.

Congratulations to Madeleine on her graduation. You must be very proud of your children, they are all doing so fine.
Great little June finish.

Hi Vickie, congratulations to Madeleine and her proud parents : yes, you're right, how quickly is flying the time !!! unbelievable :::
Your June stitching is just lovely and as always your littel pet is so cute !!
Blessings,

What a pretty June stitching Vickie. I like colors on it.
Congratulations to Madeleine too.

Such a sweet finish! Henry looks great modelling it too :D

Beautiful stitching and a great finish :-)

Good morning, Vickie! Congratulations to Madeleine and to YOU!! I was so happy to see my son graduate from high school, but it was still sad to think that my baby boy was growing up. Now that he's 29, I still look at him sometimes and am amazed at the person he has become. Have a wonderful day!

I am so glad the graduation went well and you had a great weekend! Oh the heart of a Mom....so proud of our children but just a little sad too......

Your stitching is just lovely as always my friend! I so enjoy seeing all you work on....you do such a beautiful job :)

I have been thinking about you a lot and hoping you are okay.....I will send an email soon...

Hugs my friend and have a good day!

Congrats to both of your graduates. Great job on your stitching.

Your June finish is lovely Vickie and Henry makes the perfect model :)

Congratulations to your daughter (and to the proud mom!)
Love your June finish

Hi Vickie: Congratulations to your Daughter and to you as Parents, great job.
Love your stitching, so sweet.
Henry looks so sweet displaying your stitched piece.

Congrats to Madeline and to you too, Vickie! My youngest graduated high school last year and it's definitely the end of an era when that happens. God's blessings on you all!