Hi friends! I have been stitching some precious ornaments for friends. Still cannot show you. I can show you this tiny, little bird I stitched up for Winky. ;) 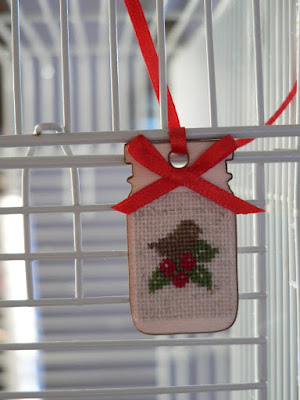 This is stitched one over one on 32ct lambswool linen with DMC. I mounted it on a tiny Ball jar wooden tag. My first Christmas decorating this year. HA! 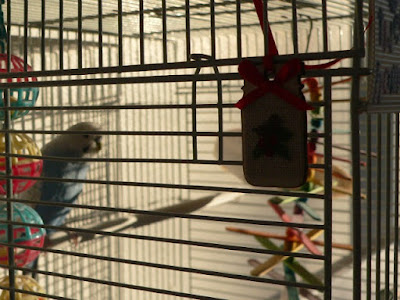 I am listening to an audio book while making gifts for friends. It is titled In My Hands: Memories of a Holocaust Rescuer. I found a piece of paper I had saved from years ago, with this book name on it. I had wanted to read this book, and I forgot about it. I am so glad I came across this reminder again. Wow. What an amazing TRUE story.

When World War II began, Irene Gutowna was a 17-year-old Polish nursing student. Six years later, she writes in this inspiring memoir, "I felt a million years old." In the intervening time she was separated from her family, raped by Russian soldiers, and forced to work in a hotel serving German officers. Sickened by the suffering inflicted on the local Jews, Irene began leaving food under the walls of the ghetto. Soon she was scheming to protect the Jewish workers she supervised at the hotel, and then hiding them in the lavish villa where she served as housekeeper to a German major. When he discovered them in the house, Gutowna became his mistress to protect her friends--later escaping him to join the Polish partisans during the Germans' retreat. The author presents her extraordinary heroism as the inevitable result of small steps taken over time, but her readers will not agree as they consume this thrilling adventure story, which also happens to be a drama of moral choice and courage. Although adults will find Irene's tale moving, it is appropriately published as a young adult book. Her experiences while still in her teens remind adolescents everywhere that their actions count, that the power to make a difference is in their hands.

Read it! Or listen to it!

I am hoping to have some stitching pictures to share with you soon. You know how it is this time of year. So secretive for a bit. ;)

Have a wonderful, beautiful week my friends. I have thanked God for YOU! 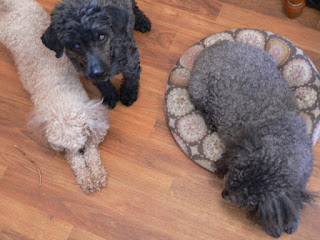 Love how you finished the little bird.

The book sound very interesting, I will look out for that one when i'm browsing.

A pretty Christmas ornament.
No wonder you are glad you found your reminder,the synopsis is powerful reading on its own.

Good morning, Vickie. What a tiny little ornament! You must have super-vision! LOL The puppies look so sweet...waiting for a snack? Have a wonderful day!

Love the little bird ,Vickie! So tiny and just to adorable. I always love this time of year with all the special gifts to stitch.....the book sounds good too...have to check it out. Love the puppies....mine is curled up next to me at the moment...grins...enjoy your day!

Love the little bird ,Vickie! So tiny and just to adorable. I always love this time of year with all the special gifts to stitch.....the book sounds good too...have to check it out. Love the puppies....mine is curled up next to me at the moment...grins...enjoy your day!

I finished a book recently called 'Winter Passing' along the same theme... it was also good! I passed it on to a friend to enjoy! I will check to see if we have 'In My Hands...' at my library... Cute little birdie stitch! Hugs!

Beautiful ornament for Winky! I like the wood jar you used for mounting it. Good idea:) love Annette


Love the ornament for Winky how cute .Your book
Sounds like a good read .
Love the photo of your 3 babies.

Lovely ornament for Winky. I hope he appreciates the over one stitching!

Vickie, the book you are listening to sounds very interesting. I had read The Diary of Anne Frank years ago but have decided to read it again. Her story is so inspiring....just like the lady you are hearing about.

I'm sure Winky is pleased with your cute stitch.

Sounds like an excellent story - and a good reminder that ONE person matters and can make a difference.

Love the doggy picture, although Yoda just hissed as he walked across the back of the love seat.

Lovely wee decoration there, Vickie. Thank you for sharing the story behind the book you read. Important lessons esp. in light of present times. The bravery of ordinary people always inspires us.

Winky looks very pleased with the ornament ~ it's so tiny and sweet! The book sounds very interesting. I'm always looking for good books and will check it out. Love the picture of your three furry friends. :)

Your first Christmas Dekoration..smile..is adorable . I like the little birds very . The book sounds like heavy food at but also really interesting .
I wish you a nice week..
Sewing and pray
your Sandra

Vickie: Love the ornament where did you find the ball jar ornament?
Love the dogs sitting together.
Your bird is so sweet.

What a tiny lovely finish!! Adorable

Cute finish! I'm currently reading The Nightingale by Kristin Hannah. Also about brave resistance fighters -- just amazing. I keep thinking I would never be that brave.

Sweet little bird tag, I hope Winky doesn't peck it!
Good book review too, it sounds like a fascinating story,

What a sweet little finish for Winky :)

What a cute ornament for a cute little bird.

Thanks for the book recommendation, Vickie!!