Hi friends! It has been warming up a little around here. It is nice to have some of the snow melt. I have been stitching a gift for a young couple at church. They are expecting their first baby very soon now. The pattern is one that I have had in my stash. It is by JBW Designs, 'Learning To Count'. 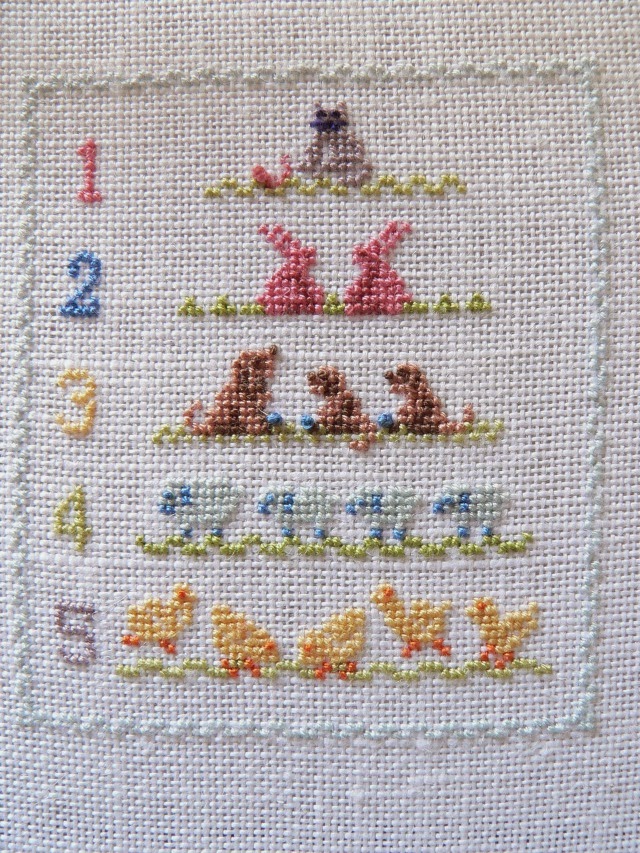 This is charted for 2 over 2 on 28ct, but you know me by now right? ;) I stitched this one over one on 32ct white linen. Now this did cause me to make some alterations. The pattern calls for 5/32" buttons. I skipped the buttons. The kitty has different whiskers, as the whiskers where charted to come out of the sides of kitty's head at eye level. Didn't care for that. I made the whiskers come out at the nose. ;) The ball of yarn is a big french knot instead of a button. The bunnies have one x for each tail, instead of buttons. The puppies have french knot balls, instead of buttons. I also gave the two smaller puppies noses. They had none charted. :( I reconfigured the sheepies posteriors to give them one x for a tail instead of a button. The ducklings had random buttons scattered, not on mine. Hey other than that.... I followed the chart exactly!! ;) I notice from this picture the linen may have shifted. I will double check. Want it to be perfectly straight again. I found this frame at TJMaxx for $5.

Now that I have that done, back to Theotokos.

I read Let The Hurricane Roar by Rose Wilder Lane. This is a fiction book about pioneer life. She used the names of her grandparents, Charles and Caroline, as the main characters. It contains a few actual events from her grandparents pioneer life on the frontier. I wouldn't have recognized all the true events if I had not read so much about Laura and Rose previously. This book was written in 1932.

I hope you have a splendid weekend my friends! Thank you for stopping by. Your kind words warm my heart. 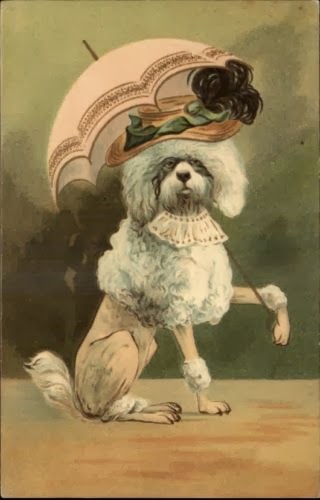 Your Baby Stitching is really cute... and looks great it your frame. I keep trying to stitch on anything but aida. it requires a little more concentration, but I love the results so I will keep trying :)

Hope you have a lovely weekend, happy stitching:)

Good Morning Vickie!
What a lovely gift for the new baby! That frame is just perfect.
So glad that there is some warming up going on in your area.
Have a wonderful weekend!

The couple will be delighted with your finish! It is a beautiful finish & the frame finish it all off really nicely.

Perfect baby gift! I'd never seen that pattern before. It will make a great keepsake for the family.

Oh, Vickie! The baby gift is SO darling! The frame is a perfect compliment to the design. The young couple will love it!

Precious! The happy couple is going to love it.

So adorable! You did an excellent job with your changes. Sometimes I'm not so brave with that.
The frame is perfect. They are going to love it.

What a beautiful gift and that frame is awesome.
Donna

What a sweet stitch and a great frame.

I think your little baby stitching gift is so cute and I'm sure the new parents will love it. The frame is perfect.
Blessings,
Betsy

Very cute baby piece and the frame was perfect for it. I'm sure your friends will love it.

Oh my gosh, what a wonderful baby gift!!! I love the design, love the over one, love that frame! You have an eye for these things!

A delightful baby gift Vickie.
Have a good weekend:-)

What a darling gift, I'm sure it will be treasured. Very best wishes to the future parents and their baby. Have a lovely weekend.

What a beautiful gift for the new baby! I'm sure the parents will love it!

What a precious gift for a new baby's family! Love your poodle tiny pincushions below, too!!

What a sweet gift for the young couple and their new little one. :)

I love that teeny-tiny finish, Vickie--just adorable!! I know the young couple will treasure it, too :)

What a beautiful game for a new little one, the frame is lovely too x

What a sweet design for a new baby! I really like it, and you did a beautiful job stitching.

Glad to hear you are warming up. We are as well.

what a super lovely baby gift - I love the frame and its color!!!
You did a gorgeous job Vickie!
Glad its warming up for you where you are. love Annette

What a sweet baby stitch Vickie. Love those colours and that frame is perfect and a bargain as well!

Great project, and frame! The couple will LOVE it, for sure! Hugs!

What a lovely gift. Well done. Glad you have Jesus in your life.

Oh Vickie, this is so sweet. A lovely little welcome gift for the new baby.

So pretty my friend x

The little baby sampler is very sweet anh tiny it is stitched over one thred.Well done again Vickie! :)

What a lovely design you've stitched for the new baby! I'm sure it was a nice break from your large project.

A lovely design and such a different but wonderful frame.
Congratulations to the new parents, may they be blessed with wonderful and happy years ahead with their new arrival.

Such a cute little design! I wouldn't have known it was missing buttons if you hadn't of said anything. The french knots work out just as well. :)

Your friends will be over the moon with such a beautiful baby gift hugs.

What a sweet gift. I am sure they will treasure it for many years. I like all the alterations you made to it. Stitching over one is my favorite a well :)

Have a beautiful day!

This is so sweet! It's nice to know that I am not the only one who loves tiny over one stitching too.

You made some great changes to this and really made it your own piece.

Cute finish! Love the frame, too.