Hi friends! I am hoping all is well with you? I am so happy to have some new friends stopping by too. Welcome to everyone! Glad you stopped by today. =)

I forced myself to get the finishing done on my mother's Christmas ornament. ;) This pattern is from the 2009 JCS Ornament Issue. It is called 'Glory To The Newborn King' by Fanci That. 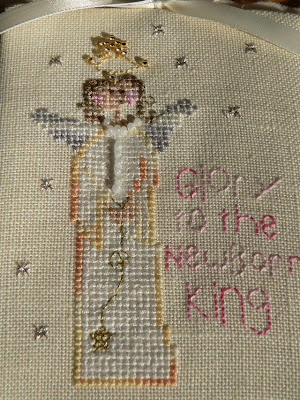 I stitched this two over two on 32ct mystery linen. I used all the called for DMC threads. Now take a look at the model picture compared to my stitched piece. 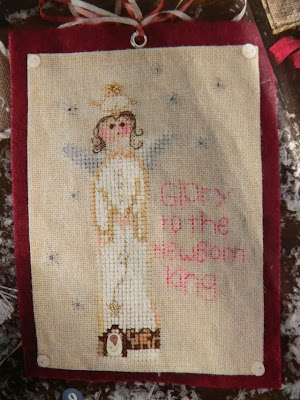 Now let me tell you that all the variegated thread used in this pattern are the called for DMC Color Variations Flosses. There are no other options listed AT ALL. So then, wouldn't, SHOULDN'T the model thread colors match mine?!?! The answer is yes. And they don't. Well, I unstitched her gown. I outlined it first and left that as called for. But to fill it in with a pink and orange variegated thread?!?! I don't think so. It was looking like a disco dress or something. So I used white instead. 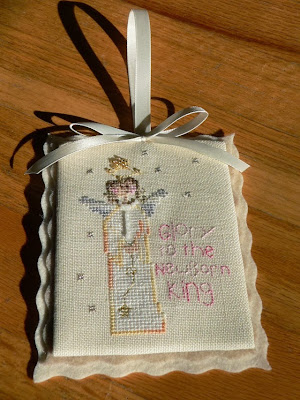 I also have a gripe about the pink variegated thread called for and used to backstitch the wording.VERY PALE!! I just left it. I asked Brian and he said it looked good. Well, every time I ask Brian, and it is a color that is called for, it "looks great"! He thinks every called for color should be used and not substituted.

I used seed beads I had on hand, not Mill Hill Petite Seed Beeds as called for. I gave her  french knot eyes instead of beads, I like this look better. I also left off the bottom of her gown with Bethlehem and the Baby Jesus button. 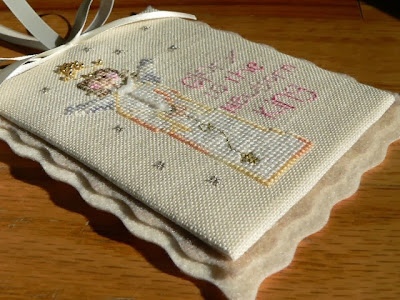 I used Vonna's tutorial on felt mounted ornaments for this. I used neutral felt and ribbon. I like the finished look very much. =)

Hark! The herald angels sing,
“Glory to the newborn King;
Peace on earth, and mercy mild,
God and sinners reconciled!”
Joyful, all ye nations rise,
Join the triumph of the skies;
With th’angelic host proclaim,
“Christ is born in Bethlehem!”

Hark! the herald angels sing,
“Glory to the newborn King!”

I got Bethlehem Scene stitched. It has alterations in the design this time, due to my error early on. I decided to unstitch part and fudge the rest. I won't go that route again. The piece looks fine. No one would know there are changes unless you compare it to ones that I have stitched correctly in the past. It just irks me though. I will work on assembling that one next.

I am still stitching on my Henry creations during the daytime, while the kids are in school. Gotta get a move on with those. They need to be done before St. Nick's, so I can get them in their stockings. ;)

I am currently listening to House by Frank Peretti and Ted Dekker, another book on CD. Wowza! This one is a mystery and suspense story written by two Christian authors. I have just begun, but it is already creepy. *~*

These two were cuddling together this afternoon in the sunshine. =) 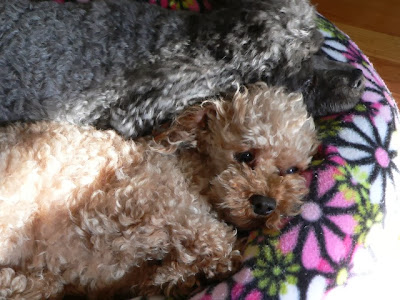 Have a stitchtastic weekend my friends!

Stitching and finishing and praying,
Vickie

Don't you hate when the threads called for don't look anything like what the model looks like? That's what happened to me too! Ugh. But your finish looks great. I think the words look fine, even if they are a bit pale. They show up just fine. Those two cute little furry ones are so adorable cuddling together! Love it!

This happens all the time when I try to stitch Precious Moments. In the picture it looks great but when I pick the thread to stitch it looks "dead"..a disaster.

I'm glad to hear that you found a good way to finish the project with the error :D good that you didn't unstitch everything.

Have a nice weekend!

Ugh! I'm in total agreement with you! I love, however, the changes you made to your mom's ornament. You've also finished it beautifully! Where did you get your felt from? I think I need to try one of these finishes!

Hi Vickie, Nobody will probably notice the mistake excepting you. Have you ever thought of making your own variegated thread. I do that off and on. There is no way anybody can copy it because they don't know the colors I used. Just a thought for future reference when you don't like it. I always love your work. Have a wonderful weekend. Hugs and Prayers from Your Missouri Friend.

Yikes! lots of issues there, all of which you were able to over come. More power to you!

I love your ornament! It is so beautiful and I like the way you did yours better than the model. You're so talented and have such a way of putting things together.

I like your ornament finish alot! I wonder if the model was stitched using certain portions of the thread instead of the full color spectrum of the thread. I do like the changes you made.

Ohh I love your ornament so much and your finish with it is so beautiful too..
Well done.
Sending you lots of love x

Well, you know my thoughts on the color choices some designers come up with : ) I think your substitutions look great. Your mom will love the ornament : )

I'm glad you reviewed this ornament because I've been thinking about stitching it... Yours is pretty :) but I won't be using the threads since you had probs with the coloring.

What a lovely design my friend it is so pretty xx

I try to lay all the threads out on the linen first to see what they will look like. Your ornament is beautiful.
I have not stitched anything since returning home yet. So much to do first. Still trying to find all my cold weather clothes!

Ha ha--an angel in a disco dress! Now that would have been a sight!! Glad you found a combination of colors that worked for you, Vickie--it looks wonderful and your mom will treasure it.

A pretty finish. Love your photo of your two lovely ,comfy companions

Beautiful Angel , so pretty and love your colour, hugs.
Love to cuddle your doggies.

Beautiful Friend.
And I so enjoyed your singing.
Woolie Hugs

Your ornament is lovely.

I think yours is far prettier than the one in the sample. I keep reading where using the threads called for doesn't always give you the same look, then way use them? Pick the colors that make your heart sing, like you did on this, it's beautiful.

Aww those two look so adorable cuddled up together.

Your mom's ornament looks nice. I too like it better than the model.

Hello Vickie!!
I think your angel stitching is evry pretty and You have allways so creative ways to make the finishing! Your furbabies are so sweet !!

Such a sweet finish, and such sweet pups!

Well, I think your Angel looks great - she is beautiful :o)
(personally I never seem to get variegated threads to look good when I stitch with them)
Cute pups! Don't they always find just the perfect place to sleep :o)
Hugs x

In the past I used to stick to the threads a pattern called for. But I don't do that any longer. If I like the colours of the picture better than the called for threads I just change the threads so that my stitching looks like the picture.
Your finish looks great with all the changes you made.

Your Angel looks so pretty. And love your finish! Looks Fantastic. I haven't tried this type of finish and it's lovely with the scalloped edged felts. The colors you stitched with are wonderful. love Annette

Nevertheless, this is a darling finish :)

Love your finish despite the problems.

Don't worry dear, we just can see the love you put in everzything you do! I love this angel!

I can definitely see why you changed the color for the dress. The pinky peachy thread is nice but, um, not for that? It looks better the way you did it. :)