Good Morning my friends! How are ya? All's well here. I have not been slacking, but it is one of those times when you are making a handful of gifts and you cannot show them for a while. I am also so very close to finishing the Valentine Banner I made yesterday. I just need to run over to JoAnn and get some white ribbon, so I can attach my big, beautiful hearts. Pictures very, very soon. =)

Yesterday we got snow. Only 2 inches. It came down rather quickly in the afternoon time. Well, Little Miss Mabel wanted to play in it. So I let her out for 5 minutes to run and play in the backyard. Twenty minutes later, she wanted to play in it again. =) So, I convinced Madeleine to get snow clothes on and play. They had fun. I stood on the back porch, under the awning taking a few pictures. 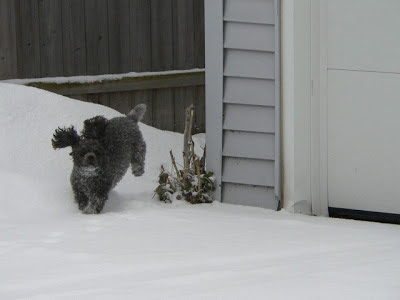 Here she is rounding the corner of the garage. Madeleine is chasing her. You can see her back has been without trouble for 3 months now. Hooray!

Well, as I am trying to focus a picture of Madeleine and Mabel, I notice out of the corner of my eye,  a bird coming into the yard, headed for them. I assume the bird did not see me, under the awning. Madeleine was crouched down out of sight,to the side of the trampoline. I quit taking pictures, because I realized the size of this bird and hear the almost silent wings. HOLY SMOKES!! This was a female Red Tailed Hawk. It must have been 3 or 4 pounds. It came in and down to kill, you guessed it! Our precious Mabel. When it was about 7 feet up and above, it found Madeleine. Thank you God!! We watched as it pulled up and tried to correct it's path. It grabbed on to the top of the fence, not 10 feet from Madeleine at eye level. It flew off 2 seconds later. Whoa!! It was obviously watching from the park behind our home. 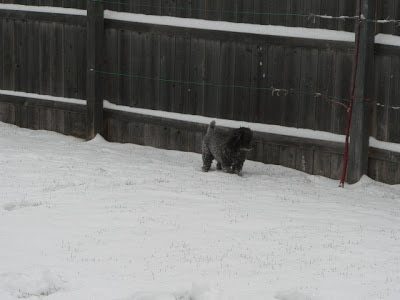 This is Mabel catching sent of the bird, just after it flew off. It landed right above the little apple tree you can see against the fence.

When Mabel was one, she was almost eaten by a Great Horned Owl. It landed on the fence at the back of the yard. I let her out for the last time at night. She barked and yipped  to be let in. Very unusual. So  I figured, what on earth is wrong here? I saw it straight ahead of me, before I opened the back door to let her in. Wow! Those owls are BIG! I opened that door so quick!! And off it flew. Wow! I think it is hard being a toy poodle when you live so near the woods and these creatures. Yikes!

I am so near 200 followers now. =) I will have a giveaway very soon. I am making something for it. I also have a gift for it already. Keep watch! ;)

I will be back soon. Have a fantastic day in the Lord my friends.♥

Stitching and praying,
Vickie
Posted by Vickie at 9:21 AM

That's a dangerous backyard for those cuties! Glad there was no real mishap.

I lost a beloved Chihuahua to a bird of some kind. Too sad of a story to share.

Yikes! That's crazy!!! I don't even think of birds being able to take on a dog... probably because my dog is huge and we don't really have many birds of prey around here... heck we only just started getting coyotes!!! So scary - but I'm very glad everyone made it out ok!

Seems like there may have been a little bit of surge in new followers since this 'grow your blog party' happened. I didn't even sign up and I think in the last week I've picked up 10 new followers. Gotta love the internet!!!

Oh my goodness!! I'm so glad that Mabel is okay. I get nervous because I keep hearing about badgers coming out at night and grabbing onto dogs' legs, and not letting go of them. Yikes.

Mabel must have 9 lives like a cat. How lucky you were there so nothing happened thank goodness hugs.

I look forward to seeing your banner! Ooh what a close call!

Aww poor Mabel. Hope she - and you - recovered quickly. x

Oh, my gosh--I never thought of a hawk carrying away a small dog, but I guess it must happen. Poor Mabel--I'm so glad she is okay, Vickie!

Glad to hear Mabel is okay. Looks like she was having great fun prancing in the snow :)

I can imagine that your heart was pounding like crazy. Glad your pooch is safe! We have hawks in our yard in the summer and they are relentless with the song birds. :(

Oh my goodness glad all is well xx

Oooh Vickie! How frightening that must have been. So glad Mabel is okay!!

Wow! I'm glad they are both safe from the hawk, that almost spoiled the fun of playing in the beautiful snow. You have a dangerous backyard.

Thank goodness that precious Miss Mabel was not harmed - what a dangerous backyard!

Oh my goodness. So glad your sweetie is ok.
I've had birds steal my chickens but never my furry girls.
Scary! Loved the photo of Mabel running in the snow.
Woolie hugs
Trace

Oh how thankful you must have been that poor little Mabel and Madeline were not attacked by that Hawk! How very scary! We live near wooded area too, and I always stand in the doorway with Meggie on a leash when I let her out on cold wintry days so that I can pull her in quickly if need be. How we love our precious babies!

I'm amazed how the bird was so bold. WOW. Thank goodness Mabel is safe. You really can't have your gourd down watching Mabel. Congrats on 200 followers - thats so fun 7& fantastic. Hope your back is feeling better:) love Annette

Wow, I know your heart had to skip a few beats there. I'm so glad everything is OK.
Can't wait to see what you've been working on and I'm looking forward to seeing this banner too!

I am so glad that Mabel is okay! Very scary.

Dear Vicky,
your sweet Mapel looks so happy in the snow. What a wonderful playground for her.
However the story of the owl sounds really scaring. Thank God nothing bad happened!

Wow! I am so glad that everyone is safe. How scary.
I love the pic of Mabel running around the corner of the garage.
I am looking forward to seeing the Valentine's Day Banner!
Hugs!

What a scary episode! Glad she's safe. Look forward to seeing your banner :-)

What a scary experience, glad nothing happened! Love the picture of Mabel

First off - love your verse Psalm 1:1-3 - talk about powerful! Glad little Mable is ok, yikes! what a scary thing to witness.

I cannot believe a bird of prey would do something like that in a populated place, with humans about! Glad our Mabel is safe and sound, thanks to you! My oldest daughter used to recite that verse above this comment box... (entire thing)when she was a pre-teen. She loved it! Hugs!

OMG! that must have been scary and a very close call indeed.

Mable is such a cutie. You captured her beautifully in the snow and she seem so happy.

Oh wow! you would think those predators would see Mabel as a bit large for a meal. I am glad Madeline was out there with her.

Too cute! My friend would dress her mini schnauser in a purple sweater so the hawks would let her be.

Ooo, that is scary. :(
I always worry about that when I let my cats out on the deck. We have a pair of hawks that nest in the trees behind our house and I'm sure a Himalayan cat looks like a fluffy bunny treat from the hawk's view.

SO glad Mabel is ok!! What a scare! I live on a lake and we have great horned owls and eagles and every other raptor known to this area. I'm always keeping my eye on our dog -- she is only 5 pounds and I think they'd grab her in a heartbeat.