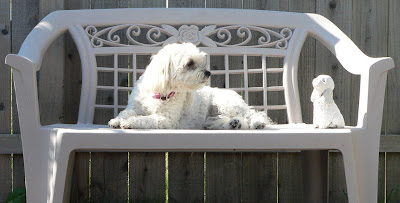 Eleven days ago as I passed the couch, I stopped to rub Maggie's cheeks and tell her "You're so cute!" She was laying next to Madeleine on the couch. There was no food present. Mabel was not around. After I praised Maggie she launched herself Olympic style, straight into the air. She attacked me for absolutely no reason. When she shot into the air, she attacked my face. She bit my nose, BUT WOULD NOT LET GO. After about one second of shock, I realized our Maggie was growling, snarling and hanging from my nose. Yes, that is right. HANGING. Maggie weighs 20 pounds. I was screaming and so was Madeleine who was a mere two feet from this happening. I was calling out to Jesus for help. THANK GOD Madeleine did not try to pull her off my nose or I am confident my nose would have come with her. I reached in her mouth and with each hand grabbed a  jaw and pried her mouth open. I threw her off, onto the couch.

I knew instantly something was very wrong. I asked the kids if it was bad. The looks on their faces told me yes. Emerson ran to get Brian who was sleeping(he works third shift). I grabbed a clean wash cloth and held it on my nose as blood was running.

Brian said he wasn't sure if it needed stitches. I am sure he said that out of wanting it to not be so bad, because this really didn't make Maggie look good. When I pulled off the bloody wash cloth, I saw the top/bridge of my nose looked like it caved in where her teeth sunk in. It looked like a bloody valley. I fainted, but Brian caught me.

Almost three hours in the Hospital Emergency Room. The Physician's Assistant who stitched me up "began sewing in the Army". I said,"But those guys in the Army don't care what they look like." He laughed and then told me it would be okay. He trained with a plastic surgeon. Even took his calls in the middle of the night when the plastic surgeon didn't want to get up. He said he would see if he could find the plastic surgeon in the hospital if I preferred. Wasn't necessary. He did a fine job. I just wish the doctor who came in before the PA began, agreed to one more stitch on the side of my nose. The PA wanted to do it, Dr. said it wasn't necessary. Now it is healing, but a dark bump is there when it could have been flat and smooth.

The next day I screwed up my courage and got on the floor with Maggie. I told her I still loved her. If you can actually believe it, she lunged for my nose again. After the attack, I was quite jumpy, so I was quick to pull back with just a very small bleeding wound to my nose. As you can imagine, I was hysterical. Brian got me calmed down.

I had an infection which the antibiotics cleared up. I had the stitches removed on day five. That doctor said the outer stitches healed well. The center was still unstable, so she used special tape to secure it while it continues to heal. My nose is still taped.

Maggie has had about one dog fight a month for years. Used to be with Mac, then also with Mabel. Over food, treats, bones. I broke up a dog fight with Mac two years ago. It took the nail on my pinkie finger six months to grow back.

To say this has been horrendous is an understatement. Maggie is a sweet dog 95% of the time. Brian and I made a very, very hard decision which the veterinarian agreed with. Yesterday we put Maggie down. The kids did not want to go along. They went along when our Mac died in September from cancer. The doctor euthanized Maggie while I held her in my arms, on my lap.

We will get her ashes returned to us soon. We will bury Mac and Maggie together.

Long post. Heavy hearts. Would you please pray for us? Our three teens are having a very hard time with this. Thank you.

The Lord is near to those who have a broken heart,
And saves such as have a contrite spirit. Psalm 34:18

Praying and finishing,
Vickie
Posted by Vickie at 6:01 AM

Email ThisBlogThis!Share to TwitterShare to FacebookShare to Pinterest
Labels: Maggie

Oh, Vickie, my heart aches for you. To lose a beloved pet (family member, to me) is bad enough, but to have your last memory be so pain filled physically is more than I can imagine. I'll definitely keep all of you in my prayers.

Vickie, I'm so sorry for the pain that your family is going thru. You had a hard decision to make and it sounds like a good one however painful it is right now. You and Brian would have been devastated if Maggie attacked one of the kids next.
Donna

OHh Vickie you poor girl, what a sad thing to happen , hope your nose will be healed soon . Rest your mind you have done the right thing if it's in them they will do it again, and it could be your children or someone else who could sue.
It is so heart breaking to have a pet put to sleep, but she will be with her other little friend now and safe.
Praying for you all, hugs.

Oh Vickie I am so sorry to hear you were injured and how heavy your heart must be with such a decision but I do feel you made it for the best. It could have been so much worse and just think if it was one of the children it had happened to? I know your dogs are part of your family and I will pray that you all heal from this. We have a saying over here in Ireland that ones a dog bites and gets a taste for blood they don't stop and I would be desperately afraid it would have happened again to you.
You are all in my prayers at this sad time.

Oh friend...I'm so very sorry. You know from my blog that I love dogs and have many of my own. While it was a hard decision, I don't doubt you made a right one. I think she must be over the Rainbow Bridge happier than she's ever been and knows she was loved. Her mind is at peace there.

I will keep you all in my thoughts as you get through this difficult time. A difficult decision but a right one. Take care and hope you heal soon.

Vickie I was so so sorry to read about this awful episode for you and your family. You were very brave to make that final decision, but it had to be made. I hope you will remember the good times with Maggie. Take care of each other. Love x

I can't even begin to imagine what you have been through. Sending many healing and comforting prayers...

Such a heart rending and tough decision to make! Hugs and prayers!!!!

Oh, Vickie--I am so sorry this happened to you... I certainly hope your physical wounds heal quickly--I know it will take a long time to heal emotionally. That must have been a hard, hard decision, but I know in your heart you know it was the wise one. Sending a warm hug and please keep us posted on your healing...

I'm so sorry to read this and for what you have endured. You were so loving to give her such a good life. I hope your wounds continue to heal and your sadness lessens over time.

Oh my! I am SO sorry to read about your troubles with Maggie and your subsequent decision. It will take some time to heal physically and emotionally, but as everyone says, it was for the best. I hope and pray you only remember the good times! Blessings to you and your family!

Dearest Vickie, So sorry to hear you were attacked. Such a difficult decision but it just needed to be dealt with. Yes I'm will pray for your family. Just continue to do what the doctor advises you so you will heal. You will heal but allow yourself the time. ((Hugs)) to you.
love Annette

How horrifying! You absolutely took the right decision, you just cannot live with an aggressive dog. I'm so sorry you lost your pet, but safety absolutely has to come first. I hope your wounds will clear up quickly.

I am so sorry Vickie.

you definitely made the best decision with your furbabie .... and it was a hard one but necessary I think ....

thank fully you will recover and soo glad it wasn't worse or somebody smaller ....(((((huge hugs)))))
love mouse xxxxx

So sorry to hear about that, but I can imagine the decision you and brian had to make,
Hope your injuries heal soon, and your all kept in my prayers xx

Vickie I am so sorry for the pain you're going thru...both with your nose and with your heart. I hope your wounds heal quickly and that memories of Maggie sustain you and your family.
Blessings

I'm afraid I've been remiss in my blog reading lately! I'm so very very sorry to read that this happened to you and for the end result. It's a no-win no matter how you look at it. I hope your nose heals without too much of a scar. Again, my heart breaks for you. I'm sending positive thoughts your way with hugs.

I'm so sorry, Vickie. :(
What a terrible decision to have to make - I can't imagine. So so so difficult. You can't keep a dog that is attacking humans though. It sounds like it was for the best, which isn't saying much when it hurts so much to do. :(

My heart is bleeding for you, that had to have been the most difficult decision you've ever had to make, but it was the right one. I hope you heal up, and stay on top of that infection. Once you start scabbing, vitamin E oil works wonders to help prevent scarring.

I'm so sorry for your loss but as everyone has said - you did the right thing. She couldn't have been a happy dog to attack her owner like that, not once but twice.
I hope you have lots of happy memories of her too.

Oh Vickie, you've had a very tough go of it, I'm so sorry for your family's troubles and sadness, and sorry to be here so late. Sometimes the right decision can be very difficult when it comes from the heart, I would have done the same. Wishing you peace...