Hi friends! I have completed February in the Joyful World SAL by Snowflower Diaries. Here the ducks are out in the snow. 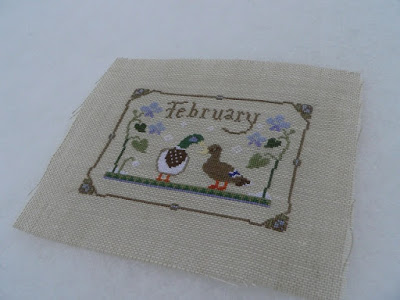 I stitched this one over one on 25ct Driftwood Dublin linen. I adore the tininess of it. I used DMC and the orange is from VMSS. I did change several colors. I gave the hen her white-bordered blue patch on her wing. 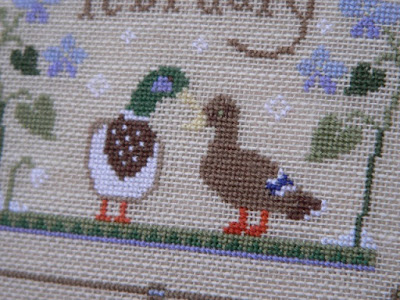 I made the violets the colors of Wisconsin Wood Violets. 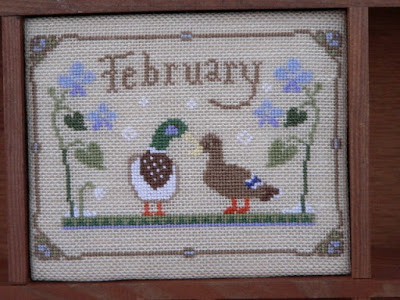 I will go back and get January done, but first I am stitching another piece for February. And then I will need to stitch up Palko's February chart.

I have finished reading Secrets of a Charmed Life by Susan Meissner.

Current day, Oxford, England. Young American scholar Kendra Van Zant, eager to pursue her vision of a perfect life, interviews Isabel McFarland just when the elderly woman is ready to give up secrets about the war that she has kept for decades...beginning with who she really is. What Kendra receives from Isabel is both a gift and a burden--one that will test her convictions and her heart.

1940s, England. As Hitler wages an unprecedented war against London’s civilian population, hundreds of thousands of children are evacuated to foster homes in the rural countryside. But even as fifteen-year-old Emmy Downtree and her much younger sister Julia find refuge in a charming Cotswold cottage, Emmy’s burning ambition to return to the city and apprentice with a fashion designer pits her against Julia’s profound need for her sister’s presence. Acting at cross purposes just as the Luftwaffe rains down its terrible destruction, the sisters are cruelly separated, and their lives are transformed…

What a good book! This is the fourth book by Susan I have read this year already. I am on a waiting list at the library for her latest book. Reading has been competing with my stitching.

I had the MRI done. I now wait to see the spine orthopedic surgeon on Monday. I am hoping for answers and NOT surgery. I have learned over these last weeks that the pain and pressure are unbearable if I go off of the muscle relaxers. Since I have the go-ahead to stitch again, I am!

“In His unbounded love, God became what we are that He might make us what He is.” —St. Irenaeus 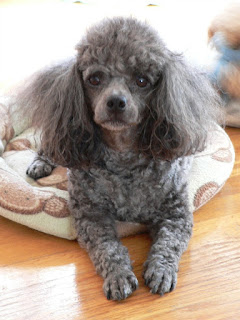 A sweet finish for February :)


Lovely stitching Vickie , I will have to play catch up soon hugs.

Love your color choices for fabric and floss. I'm finally getting around to stitching January. I haven't made any floss color changes, but I think maybe I should have for more contrast on my fabric. It still looks cute though. These are such sweet designs.

Lovely finish! Awww look at the cuties at the end of your post. So sweet. :)

Wishing you a day filled with many blessings sweet friend. :)

Dear Vicky,
it has been a while since I had the time to take a walk through bloggerland to read and comment. Therefore I missed some of your blogposts, but read them all now.
I hope you don't mind me to comment all of them here.
I am so sorry that your pain is back again and I really really hope the answers you will get next week are of "no surgery"-kind of solution!

I LOVE the cuby shelf you should this and last post and that you are going to fill with this tiny darling stitchings.
Joyful world is such a lovely SAL. I really hope I will find the time (one day) to stitch it too.

Sending all the best wishes for health and no pain!

Yippppeeee!! I love it!! Your ducks are so cute :) really like the colour changes you made too.
Just in time for March in a few weeks!!
Take care of yourself...
Have a happy smiley weekend :)
Xx

Hello Vickie,
your little ducks are very cute. I will stitch the ducks, too.
Have a ncie weekend, Manuela

Beautiful work, love these designs, hope to stitch them too, soon :)

A very pretty little design,beautifully stitched.
Hope you have a great weekend.

A lovely finish! My hubby has severe back issues and can't live without muscle relaxers either. He had an MRI and the Surgeon told him there is nothing he can do, it's a genetic defect. Take care, praying for you :)

February looks great. IF I stritch this SAL I will definitely make them over one.

Hope you get some answers from the MRI too.

Really hoping that you get answers next week x

That is so cute.

February already, that's so pretty, love the colors you used:)

Such a pretty stitch! Hope you get the answers you need soon.

I have joined the SAL, but not stitched anything yet, ducks are very cute.

That is a really cute finish... but I can't believe you are still stitching, while in such pain! Aren't you supposed to be limiting it?? Keeping you in prayer!

Good evening, Vickie. So beautiful! And over one? You are crazy!! LOL I did over one ONCE. Not my cup of tea. It is really hard to frog when you make a mistake. And I made quite a few on that project. LOL

I hope you get good news. Surgery is always scary. It would be nice if they come up with alternatives, at least to try first. You know that I'll keep holding you up in prayer...have a good weekend, sweet Vickie.

What a wonderful SAL Joyful World is and so many stitchers have joined. Love your version of February.

Oh It is lovely!!

Pretty finish, mines all kitted up ready to begin.
Hope you can get some help after the scan.

what a great finish. I love this SAL.

Hi Vickie, Your little ducks are just adorable! I am so enjoying seeing these little animals being stitched. The book sounds great. I too am on a waiting list at my library for her books. I am praying for good news with your MRI and that you will not need surgery. I am so glad that you can still stitch :) even though you still have pain. I know how happy that makes you. Have a good weekend my friend and I hope you have many happy moments reading and stitching.

Hi VIckie,
So sorry to hear about your pain. Hopefully a quick solution can be found. Your stitching looks lovely!
Take care of yourself.
Lisa M.

I hope you get some useful information and don't need surgery. I always think of that as the last resort, but sometimes it is necessary. Thankfully the Great Physician is in charge and we just have to believe and trust.

That book sounds fascinating. I always love stories where the past comes into the present and things need to be sorted out. Makes you wonder who and what your decisions are going to affect.

What a neat little design. Interesting to hear what you're reading - I find it so hard to find new books nowadays as so many of them don't have a decent story.
I hope your results show no need for surgery Vickie.

Vickie: Mabel is so cute posing for you.
That book sound very interesting, I am ordering a book called The Privilege Of Being A Woman by Alice Von Hildebrand, it looks like my kind of read.
I am so happy you are able to do some stitching, February is adorable, I love duck.
I hope your MRI says nothing is requiring surgery.

I love these Joyful World designs. They're so pretty. Love how yours came out. I want to read Secrets of a Charmed Life -- it's on my to-read list. I'm glad you're stitching, but so unhappy that you are still experiencing problems and pain. :( Prayers that you get answers and not surgery from the doctor.

Be careful, take care and I hope there will be good answers concerning the pain etc. Answers that can help you.
The ducks are lovely and what a beautiful fabric you used :)

P.S. Never hears of Wisconsin wood violets, grins ... Lovely name and thought though and they are so delicate like this. Must go and google about them :)

Gorgeous finish! I'll be keeping my fingers crossed for you, Vickie :D

Dearest Vickie , I express to you our fingers crossed for the results of your MRI examination . I hope it will soon be up for it and the pain better . Your February has become beautiful and I find it so beautiful that we have embroidered the same despite the great distance that leaves the world the same but much smaller werden..smile ..
A prayer for you
Your Sandra

Did you get Palko's February chart yet? Or, does it come out sometime in February?

The monthlies from Snowflower Diaries are so cute!

Beautiful stitched piece! I'm definitely going to have to make this one! I'm so glad you're stitching. The book you read sounds really good! I love reading (as you know) and have been reading some wonderful books.

I hope you get good news regarding your MRI.

Love the Joyful World February! I do have a question. I've just started stitching January on 25 count Davos. What did you do with the specialty stitches right underneath the fox's feet? Do they work over one?