Hi friends! How are you? It has been a while. I have been busy nursing our dear old Murphy. He has torn his ACL. The vet has told us it has torn from old age. He IS 15 years old! His parts are wearing out.😢 The vet assures us that with rest and very limited movement for two months, he should recover without surgery. We are hoping his left knee holds out! The vet said he can feel a little laxity there. And with him depending on it so much, and being so old, it is going to get a real work out.😟

We watched the Christmas parade Sunday evening from upstairs here in the apartment, since we live here on Main Street. I held the poodles up to the window.They like watching the action. I had a few people wave to us.😁

I never did show you the finished ornament I made from the stitching of Jacob. I showed it on Instagram a week ago, but not here. 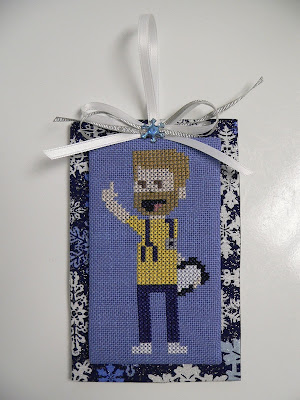 More big news in our little household. Our oldest, the one you see above, Jacob, is moving out this week. Yes, it is time. Yes, he is 24 years old. Yes,now he has his career and an apartment 20 minutes away from  us. He will be living by himself. It is a very nice place in a very nice neighborhood, close to Children's Hospital where he works. It is still hard on this mom who has lived with him all these 24 years.😭

I am still stitching on Madeleine's ornament while she is in school. When she is home I stitch on the December wreath for my cubby shelf. The last one of the year!

I worked on this little piece while Madeleine is around and I cannot work on her Christmas ornament.😉 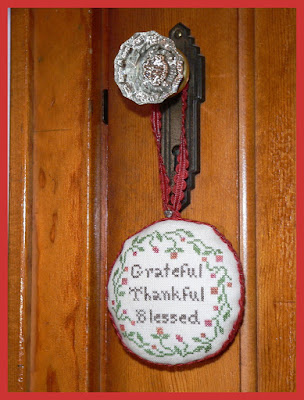 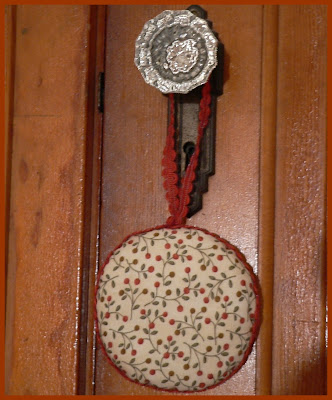 You can find this sweet freebie HERE It is from Heartstring Samplery.

The Rise of the Mystics by Ted Dekker is the second part of his latest series. I read it recently because I have read all of Ted's books. I really like Ted. I used to be a HUGE Ted Dekker fan. My interest has decreased slightly. This book was not bad at all, just not excellent.
Some say the great mystery of how one can live in two worlds at once died with Thomas Hunter many years ago. Still others that the gateway to that greater reality was and is only the stuff of dreams. They are all wrong. Rachelle Matthews, who grew up in the small town of Eden, Utah, discovered just how wrong when she dreamed and awoke in another world. There she learned that she was the 49th Mystic, the prophesied one, tasked with finding five ancient seals before powerful enemies destroy her. If Rachelle succeeds in her quest, peace will reign. If she fails, the world will forever be locked in darkness.In The 49th Mystic, Rachelle found the first three of those five seals through great peril and mind-altering adventure. But two seals remain hidden and the fate of both worlds hangs in their balance.As Rachelle Matthews sits deep in a dungeon, Vlad Smith is just getting started. Thomas Hunter's world is about to be turned inside out. The mystics say that there is no defense against the Fifth Seal--but finding it will cost Rachelle everything.So begins the final volume of high stakes in one girl's quest to find an ancient path that will save humanity. The clock is ticking; the end rushes forward.Ready? Set?Dream.

I hope you have a wonderful week my friends. I will not be back here on the blog until next week. We will be busy helping Jacob move this week/weekend. Thank you for your sweet comments. I appreciate your friendship!

"Salvation is nearer to us now than when we first believed." -Romans 13:11 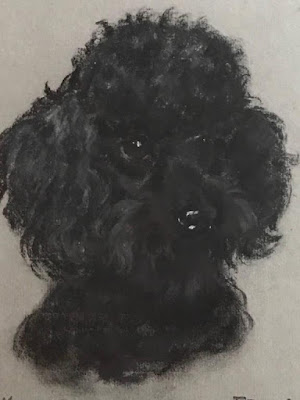 Hi friends! I finished my Christmas ornament stitching last week, but I was HOPING to have had this ornament completely finished before showing you. But you know what? I can't stand waiting anymore!!!🤪 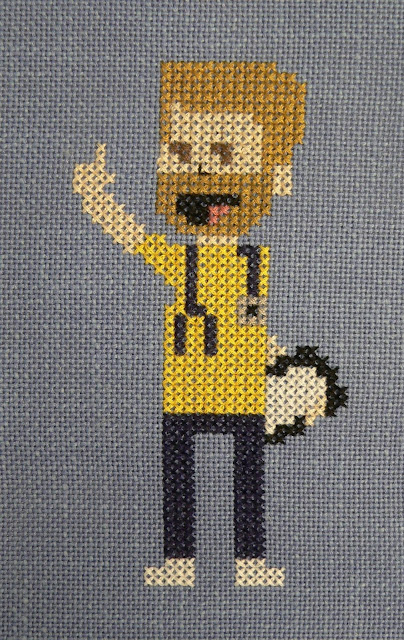 What do you think? It was IMPOSSIBLE  to find a MALE NURSE pattern anywhere on this planet!!! I searched the internet my friends. In English, Spanish, German, French, Italian, Japanese, Chinese....  Yes, I REALLY did! I could not find a pattern to buy or for free anywhere UNTIL this!! This actually looked like this:Click here   The pattern was designed to be a doctor. It took some redesigning by ME to make it into my Jacob the male nurse.

It has not been easy for me to stitch these Christmas ornaments! I make them as surprises for the kids, and the kids all still live here at home!! I give them in their Christmas stockings each year on St. Nick's. My goal is to get this ornament fully finished this week.

There are many free patterns available from this designer. If you would like to check those out CLICK HERE

I have been stitching up Madeleine's ornament also. Her's will be QUITE DIFFERENT!!😁 Ha! That is all I am saying for right now. She is still attending university. She is getting a studio art degree. 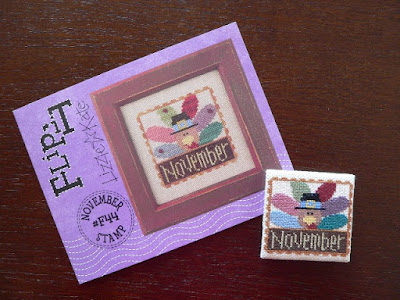 The winner of the Lizzie Kate Flip It November Stamp Pattern is:  Kaye! The pattern will be on it's way to you tomorrow!

Thank you for stopping by today my friends. I want to wish all of my American friends a Blessed Thanksgiving! May you all have a wonderful week!

In his heart a man plans his course, but the Lord determines his steps. -Proverbs 16:9 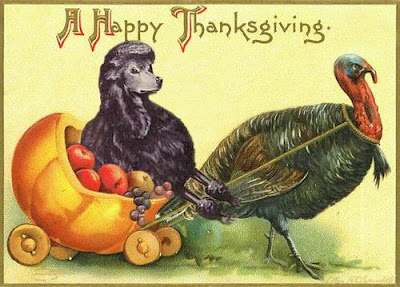 Do you notice the problem though? ARGH! I stitched it on what I THOUGHT was 25 count evenweave. Well it was UNEVENWEAVE. It is 25 count one way and 29 count in the other direction!!☹️  Come on!! See how my finish above is not a nice square "stamp" shape like the pattern? Mine is a rectangle. PUH! It has linen showing above and below. I had the perfect cubby square for it picked out. Well, that is where I put it anyhow. 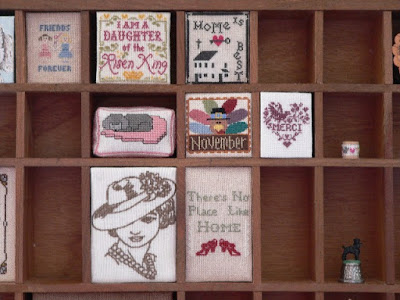 The UNEVENWEAVE fabric is gone in the trash. I do not want more stitching screwed up!🙁 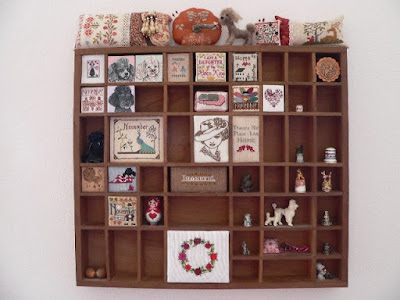 This Lizzie Kate pattern was a gift from our friend Robin. She asked me to pass this along to another stitching friend when I finish, so I will. Here is the deal. You must be a follower of this blog. This giveaway is open to any friend anywhere in the world. There is one catch. I am asking anyone who wants this pattern to first give me a favorite pumpkin or sweet potato recipe. Yes, for real. If you do not leave a link here in the comments to the recipe, or email me the recipe ( my email is in my profile on the upper right, at the top of this blog), you will not be included in the giveaway for the pattern. 😮

🦃I will draw a name for the winner of the giveaway on Monday, November 19th. 🦃

I am now stitching Jacob's Christmas ornament. It is, let's say interesting. I have to do a bit of make it up as you go along.🤔

I am SO GLAD  you decided to stop by today. Really! It seems less and less friends stop by and read blogs. Or maybe less of you leave comments? I appreciate you taking time to leave a friendly note. THANK YOU!!! 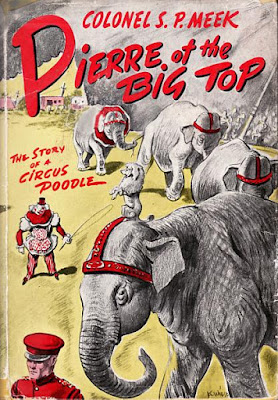 Hi friends! I have completed the finishing on my mom's ornament. Let me show you. 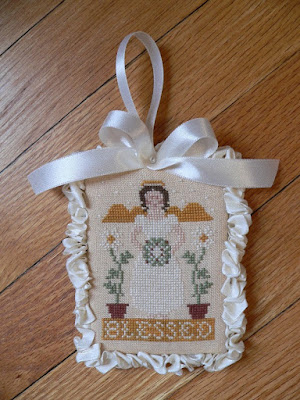 This is Blessed by LHN. I stitched this two over two on 35 count tea dyed linen with the called for DMC, except I changed DMC 167 (the angel's wings, halo and the background to Blessed) to VMSS 1795 Tarnished Gold. I think it looks much more like the cover photo than the DMC called for. 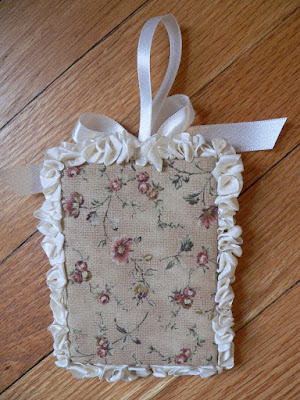 This lovely backing fabric was a piece sent to me by our friend Carolien.😊

I am very happy with the final look of my mom's ornament. I must say that I do NOT enjoy making ruched ribbon. Ugh. It took me at least two hours to ruche, I don't even know how many feet of ribbon!! A lot!

The Secret Holocaust Diaries: The Untold Story of Nonna Bannister by Nonna Bannister was a fascinating WWII story.
Nonna Bannister carried a secret almost to her Tennessee grave: the diaries she had kept as a young girl experiencing the horrors of the Holocaust. This book reveals that story. Nonna’s childhood writings, revisited in her late adulthood, tell the remarkable tale of how a Russian girl from a family that had known wealth and privilege, then exposed to German labor camps, learned the value of human life and the importance of forgiveness. This story of loss, of love, and of forgiveness is one you will not forget.

Have a super week my friends! I will be back next time with a turkey finish and a pattern giveaway!🦃 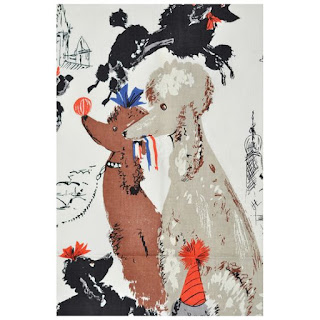 Hi friends! I did not get my mom's ornament finally finished. I did get the November poodle stitched and finished. Here it is. 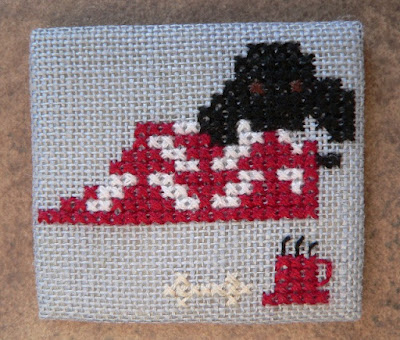 Isn't it sweet? I have been wanting to make a black poodle all year, but knew that it would not show up well. I just could not skip a black poodle. I have done all the other colors.It has a french knot nose, honest! 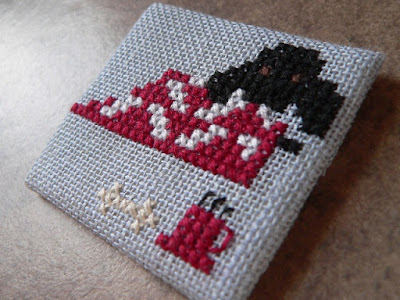 What do you think of my red and white flying geese quilt I made for my poodle? How do you like the mug of chai latte? Ha! I drink one almost every day. I dip my finger in the foam at the top twice for Henry. Murphy (if he is awake!) drinks the very bottom.😉 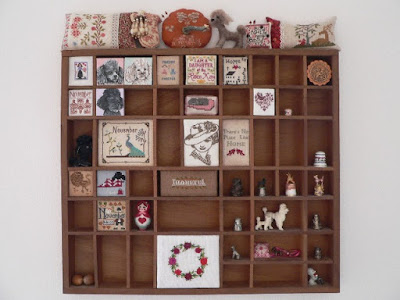 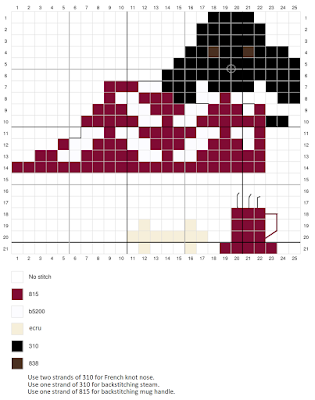 This free pattern is part of the Calendar Poodle SAL I have been having all year long. Just click on the tab at the top of  this page and you will go all the free poodle patterns.

I am now stitching a sweet Lizzie Kate November pattern given to me by our friend Robin. I will be giving this pattern away after I am done.

I read The First Love by Beverly Lewis and of course, I liked it very much. I have never been disappointed in one of her books. Ever.
It's the summer of 1951, and Maggie Esh is in need of some hope. Sweet-spirited and uncommonly pretty despite struggling with chronic illness, she is used to being treated kindly by the young men of her Old Order Amish church district. Yet Maggie wishes she were more like other courting-age girls so she could live a normal, healthy life.To make matters more complicated, Dat has recently remarried, less than a year after her mother died. And while her stepmother is kind, Rachel is much younger than Mamm, and she simply doesn't understand Maggie or her illness the way Mamm did.When tent revival meetings come to the area, Maggie is curious, and the words of the Mennonite preacher challenge her to reconsider what she knows about faith. Can she learn to trust God even when hope seems a distant dream?

Thank you for stopping by and visiting with me today my friends. I am so glad you did. It seems I have less friends taking the time to visit blogs these days, so I want to thank YOU for coming by.😘 I appreciate your kind comments. God bless you! 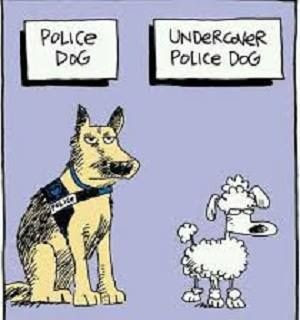